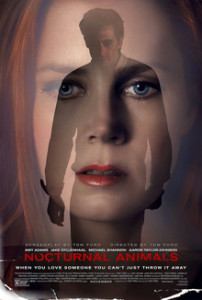 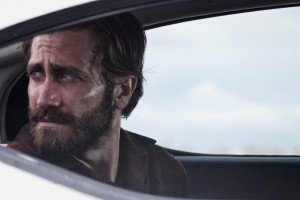 A strange take on a crime story that makes for a pretty deep and interesting movie.

A pretty cool movie that tells a crime story meets vigilante justice tale, while at the same time also giving us the dramatic story of a failed relationship. This film finds ways to fracture the romance story so heavily that the aftermath of the relationship is shown to us before we even see the way it began. And the story of the book the author’s writing (the crime story,) works in the unusual way of having the actor who plays the author (Jake Gylenhaal,) also play the books protsgonist. That leads to all kinds of ramifications, from possibly thinking they are the same story, to realizing that the book represents something that happened in the authors life. It’s a pretty deep and symbolic experience, but also a thrilling find often scary film.

Nocturnal Animals is strange. It’s different. Not in a totally out there, really hard to figure out, David Lynch kind of way, but certainly in a fractured narrative, have to put the pieces together way. The movie actually tells three stories at once. No big deal, right? I mean countless other movies, such as Love Actually, tell about ten stories at once. But here’s the catch… these three stories all feature the same characters at different times. And scenes from each of the stories are mixed together so that they alternate with each other, meaning we are watching the same characters at different times in scenes that are not in order.

It’s not quite as confusing as it might seem. For one thing, two of the stories are directly related, and really feel like one. Those are the stories of the relationship between author Edward (Jake Gyllenhaal,) and art gallery manager Susan (Amy Adams.) The first story tells of the start of their relationship. The last story tells of the aftermath of their relationship, meaning it jumps to about ten years after they have been separated and are now living new lives. These stories are not told in order. The movie starts with the third story, as Susan is in another marriage, and has flashbacks to the start of her relationship with Edward.

So what’s the second story? That’s where things get a little tricky. The second story is  the book that Edward has written. It tells the story of a man named Tony, who takes a drive through Texas with his wife, Laura, and daughter, India. And here’s where the trickiness comes in…Tony is played by Jake Gyllenhaal. Laura is played by Isla Fischer, looking exactly like Amy Adams. It’s very hard to tell them apart, considering we only see Fischer at night, in quick scenes, without any closeups. So basically, when we start seeing the story of the book, (early in the movie,) it’s very easy to think we are watching the story of the author and his wife, from something that happened to them in the past. It’s easy to not realize that these are book characters we are watching, and not our main characters.

The movie might start getting complex with the book, but that’s certainly not where it starts getting weird. In fact, it starts out strange from the very beginning. The opening credits sequence rolls to the images of large, obese women dancing around in the nude. Each woman is shown individually in closeup, and the only thing these women wear is some sort of playful marching band gear, like a hat. Or the holding of a baton. The sequence transitions into an art gallery exhibit by Susan. The idea behind the sequence is freedom. These women have no inhibitions. They have nothing to hide and nothing to lose. Perhaps that represents the same mentality of Edward, when he writes the book. You see, later on in the film we learn what the book really meant and represented.

The book story is about Tony and his family getting driven off the road at night. It’s a car of three men who make them stop and slash their tires, forcing Tony to get out. He watches as the men fix his tire, but then can do nothing about it when two of the guys drive away with his wife and daughter. The last guy stays there with Tony. He then drives Tony to a ditch somewhere, makes him get out, and leaves him there. A little while later, two of the guys come back, looking for Tony. He hides from them in the darkness and they end up driving away.

Now we are back with Susan. In an earlier scene, she received the book and began reading it. That’s how we got into the books story. And now, she begins picturing how her relationship with Edward began. They ran into each other in a coffee shop. The two of them had been college friends who hadn’t seen each other in years. And now, Edward found himself in Nee York, not knowing anyone, and running into Susan. The two of them start dating. Soon, it is pretty serious. Susan has an interesting lunch with her mother (played by the great Laura Linney,) where she gets a lecture about how her mother views the young couples relationship. It boils down to one line the mother says…”He is not your equal.”

We go back to the book story in Texas, where Tony’s wife and daughter have been found dead. They were murdered. A year later, the detective,  Bobby Andes (Michael Shannon,) is still pursuing the case. He has the guys who did it right where he wants them, only there are some political reasons why the state might just let these guys go. Basically the state wants Andes out. They want him to retire. And they’re willing to sabotage his case,  and make it seem like Andes screwed something up, in order to make it appear like he was incompetent. Andes, of course, is not okay with that. He’s got terminal cancer and only s little time left, and therefore has got nothing to lose.

And Back to the story of Susan and Edward, we now see the end of their relationship. Edward is not successful as a writer, and Susan doesn’t believe in him. The two of them separate, and Susan starts seeing another man, (played by Armie Hammer.) Only she’svafraid that Edward isn’t ready to walk away from her. And so she does something pretty drastic to get him to leave her, once and for all.

The end of the book involves Edward and Andes going after their men. Now they are vigilantes, taking the law into their own hands. With Bobby all in and committed to the cause, it’s only a better if time before he gets Edward to share his “do it yourself,” mentality. It’s an exciting climax, as they pursue their enemies and even get separated. It also points out how much better and more thrilling the book story is than the real life story.

Back in the real life story, we get our conclusion to the story of Edward and Susan. We realize st this time that the post relationship story has all been about Susan. In fact, we never saw him once in this ten years later story. By doing that, the movie features each character in exactly two stories. Edward is in the book story (as Tony,) Susan is in the post relationship story, and they are both in the pre relationship story. It works. The strange formula definitely works. It might seem like this movie didn’t need the author story and could have just been about the Texas drive, but that is simply not the case. The drive story might be the most thrilling, but it’s rhe author – relationship story which really plays with the narrstivr and gets the reader to think. Together they make two halves of a pretty entertaining whole.