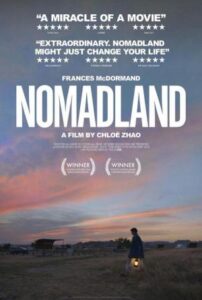 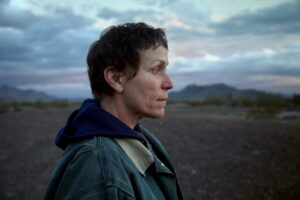 With no real conflict, the premise here is interesting enough, but the story of the movie feels kind of empty and wandering, just like the character.

Nomadland is a movie about a woman named Fern who is trying to make it on the road, living in her van. She spends the movie traveling to different parts of the country, going from job to job. None of these jobs are very glamorous, and to make matters worse, the movie has very little going in the ways of conflict. Sure, there’s the overall conflict about why Fern is doing this, but the movie doesn’t really see that as a conflict or treat it that way, and it certainly doesn’t offer resolution. For the most part, this is a movie about a character wandering from place to place, meeting different people. It is not very interesting, and yes, it is about a different way of life, but that turns out to be not enough. Maybe for a documentary this content would have been suitable, but for a feature film, conflict is needed.

Here’s a movie that should have been interesting. If only they had found the right way to tell it. You see, the one thing that all stories need is conflict. And really that’s about it. But in Nomadland, we get a movie about a woman named Fern, (Frances McDermond,) traveling around the country in a van, going from job to job, meeting all sorts of different people, and not really running into conflict. Sure, there’s a deep character moment that comes out at the end. And sure there are quick conflicts from time to time that are immediately resolved, like when one of Fern’s tires blows. But for the most part, this is a wandering movie. And that’s obviously the point. No mission. No goal. No conflict. A movie that just exists, almost like a documentary, but a documentary about nothing. About living in a strange way. It’s not enough.

The thing that’s especially frustrating is that this could have been a much better film. After all, the setup tells us that Fern was living in a town where the local construction supplies plant shut down, causing nearly everyone to lose their jobs. That meant everyone evacuated and moved away, to the point where the town’s zip code was eliminated all togerher. Now that’s interesting. Only the movie doesn’t show it. You would think common sense might weigh in here. How do you make a movie about an entire town shutting down uninteresting? By not showing any of it. Instead, the movie starts with Fern selling her things, climbing into her van, and heading out on the road. Not a single shot of the town shutting down. Talk about a missed opportunity and a massive error in judgement.

But the movie does start with Fern driving away, and her first job is working for Amazon. It’s a seasonal job, which hires people for about a month in the Wintertime, right around Christmas. After that, it’s no more job with them until the same time the following year. Fern works hard at the Amazon warehouse, alongside her friend, Linda, a much older woman. While there, Fern is visited by a family who was close to her, back when Fern lived in the town. The mother of the family approaches Fern and asks if she’s doing okay. She even offers Fern to come stay with them. Then the younger daughter, who Fern used to tutor, approaches. She asks Fern whether or not Fern is homeless. “I’m houseless,” Fern says, “not homeless. It’s not the same thing is it?” That’s because Fern is living in her van. Her van is her home. That’s the way of the nomads.

Fern runs into another concerned person when she parks for the night in a parking lot area and a stranger approaches her van. It’s a woman who wants to let Fern know how cold it will be getting that night. The woman advises Fern to go to a local Church, which welcomes people in and allows them to stay overnight. Fern rejects the offer, saying she will be fine. Clearly this is a lifestyle that Fern is choosing, as she has multiple offers coming in of people who are willing to help her. And this is a pattern that will continue throughout the film. There’s something deeper going on with Fern, as far as why she wants to live this way, and we long for the possibility that the movie will tell us by the end. It only partially answers our questions.

While on the road, Fern’s van blows a tire. She finds another van parked nearby, and approaches, despite the skull and cross bones flag draped over the side, (a sign, we learn, that is used by the nomads to mean they don’t want to be disturbed.) Fern gets help from another older woman who lives on the road, named Swankie. Then Fern spends some time bonding with Swankie and learns that the woman is sick, and is dying of Cancer. But instead of wanting to spend her last days inside, in a hospital room, she would prefer to spend them out here, living in the countryside.

The next character on Fern’s list, who she comes across, is a man named David, (played by David Strathairn.) He’s a nice guy who sells Fern a can opener. During a nomad party, he then dances with her. Later on, the two of them meet up again, at another site down the road, and David offers to help Fern get a job. She accepts. When he gets sick, she helps take care of him. And when David’s son comes to visit, with news that he is having a child, Fern convinces David to go and stay with his son. “Go be a grandfather,” she tells him. It’s advice that maybe she should be taking herself.. to go be a part of something bigger than this, and to invest in other people.

But Fern believes she is indeed a part of something with the way she is living. She believes she is part of the nomad tribe, wanderers with nothing tying them down. You would think the big secret was that Fern loved once and then got betrayed and learned to never love again, or never trust people again. At least that would be a little darker and a little deeper than what we actually get. But before anything is revealed, Fern’s van starts to fall apart, and she does not have the money to fix it. This throws a monkey wrench into her plans. Fern tries to get the money to pay for the van from her sister, only her sister doesn’t want to just send it to her. And so Fern has to go and visit her sister.

It’s at the sister’s place that we get the first real conflict. And once again, it’s only about a second long. With this one, the sister’s husband makes a remark about how Fern just dropped everything and got on the road to leave it all behind. Fern resents the comment and gets angry, causing the sister’s husband to apologize. Later, Fern’s sister tells her how strong and independent she thinks Fern is, and then gives her the money. She also offers Fern to live with them. Fern, of course, rejects the offer. And then she goes to visit David, who is now living with his son and his son’s family, being a grandfather. Fern has a nice time there, meeting David’s family, but when David asks her to stay and live in the guest house, Fern rejects his offer, just like she has with every other offer that came her way during the course of the film.

By the end, we get a little bit of a reveal, but it really isn’t much. We learn that when Fern’s husband died, she decided to keep living in the town because her husband had no living relatives, and she wanted to preserve his memory. If she left the town, it would have been as if her husband never existed at all. That’s kind of interesting, except for one problem… it doesn’t explain anything about Fern’s current situation. That’s why she stayed in the town, sure, but why is she now living a life on the road? We get that Fern doesn’t want to commit to anything and be tied down at all, but why? A better movie would have given us answers to these questions. Like maybe Fern did something really terrible at one point in her life, and now was trying to punish herself in order to make up for it. Ideas like that would have gone a long way. But this movie doesn’t even try to give us the basic answers we are looking for.

Nomadland is not a very good movie. It is a contender for best picture at the Oscars this year, and it’s not hard to see why the critics like it. The movie is something different. It does feel like a documentary, and it does feature real people in uncomfortable situations. The problem is, those situations aren’t really all that interesting. Every once in a while we get a compelling story, like the one told by Bob, towards the end of the movie, about his son who took his own life. But for the most part, this one is pretty dull and slow. It is artistic with nature and all of that, but as far as story goes, this one is filled with holes and missing areas that should have been filled in.  The story should have been stronger. And that goes back to the lack of conflict idea. The plot is so thin, that a lot of times we wonder if there even is a story, or just a character wandering from one place to another. Different doesn’t always mean good, and without basic building blocks, like conflict, any movie is bound to have problems.