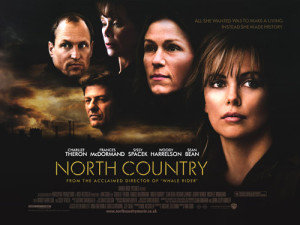 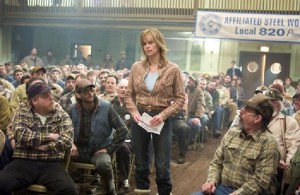 A pretty good movie, with a slightly bumpy beginning, a great middle, and then an ending that is a little more simple than it should have been.

North Country is a good movie. it’s entertaining and upsetting and definitely keeps you interested. this is a movie about the first class action sexual harrassment law suit at a time when things like that were barely imaginable. especially in the mining town where this story takes place. josie aimes takes a job in the mines and doesn’t realize what the means she will be subject to. suddenly she and the other girls who work there are facing loads of harrassment and it is josie who decides to do something about it. for most of the way this movie is pretty good, but it definitely loses it’s strive to be something original by the end. the court room scenes in the final portions of the film feel very generic, but up until that point, this was definitely a powerful film.

North Country is a very entertaining movie. this is the kind of story we haven’t really seen before. it’s a movie about a sexual harrassment class action law suit. we’ve all heard of plenty of them on the news, be it clarence thomas or bill cosby being accused, but this is something different. it’s not about one person comitting the crime, but a whole group of men at a job and how one woman stands up for herself.

in an age where most courtroom films are about major criminal activity, there aren’t many class action law suit films. the two that come to mind are erin brokovich and a civil action, both being films about a big company dumping waste and destroying the environment at the expense of those civilians who lived in the area. North Country is something entirely different. it’s about being harrassed and how far a person can be pushed before she can’t take it anymore.

the movie has a pretty good story, but it is the all-star cast that really makes it. granted, nobody is giving the performance of his career here, but still the deck is loaded with familiar faces in prominent roles. charlize theron plays the lead, josey aimes, and her parents are sissy spaycek and richard jenkins. at work, she has male coworkers (jeremy renner, corey stoll), and female coworkers (frances mcdermond, michelle moynahan.) then there are also some of the men of the town who don’t work at the mines, sean bean (mcdermond’s husband,) and woody harrelson, who becomes josey’s lawyer.

at the start of the movie, things are a little confusing. that’s because there is just too much happening at once without it really getting explained. josey leaves her boyfriend and moves in with her parents. apparently her boyfriend has been beating her. she takes her two children, packs up, and heads out. part of this opening seems to happen in flashback, and that adds to the confusion, but it isn’t long before the story at the mines begins, and that’s what this movie is really about.

there are comments made to josie by coworkers, (mainly by bobby sharp, played by renner), but mostly things stay pretty balanced for a while. that’s because the movie is busy presenting us with a setup of who the different characters are. there’s glory (mcdermond) who is the union representative for the women at the mines. then there’s josie’s son who plays on the hockey team and runs into some conflict with the other players when rumors start flying around about his mom. that story, in particular, could have used another scene or two with the son explaining why he quit the team and what was going on. instead it is dismissed pretty quickly.

the situation that leads to rumors going around about josie comes from bobby hitting on her one day and josie rejecting him. apparently bobby went home and told his wife that the opposite happened, and so the wife confronted josie at the hockey game, shouting at her in front of a crowd. this leads to josie getting the reputation of being a homewrecker.

at the start of the movie, there was a quick restaurant scene where josie’s boss was eating at the same place, and came over to speak with her. this boss offered josie that if she ever had a problem, she could come and speak with him. as the movie goes on and more things start to happen to her, josie seriously considers doing this. especially after bobby turns on steam while josie is in a tunnel, so that she will have to go out on a small ledge to get air. once out there, bobby comes out after her and demands a kiss. josie refuses.

things get worse not only for josie, but also for her coworkers. one day sherry is on the job, using a porter potty, and a bunch of guys decide to push it over. she gets covered in the blue toilet liquid. the men at the job also write messages on the walls about the women. but when josie goes to the middle man, who represents the big boss, in order to complain about it, he tells her that nobody wants to hear it. this man seems to believe, as do many others in this film, that women have no place working in the mines and should know better than to even try.

this all builds up to josie going to see the boss after all, and getting turned away by him. then there’s an attack by bobby that causes josie to finally quit the job and sue. the final segment of the movie is the court case, and here is where the movie loses it’s momentum. there are moments here that feel very cliched and out of other films. when woody harrelson interogates bobby on the stand and basically tricks him into admitting something, his shouting and badgering the witness approach is a little ridiculous. so is the way the son resolves his problems with josie, after a quick talk with sean bean. even the way the verdict is figured out doesn’t work. it’s a mess of an ending, but still, the film up until this point was all very good.