Nostalgia On All Sides to End 2021 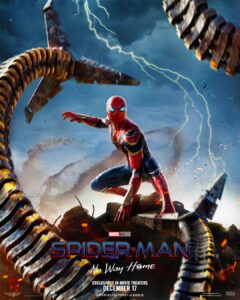 What a weird place we are in to end 2021. Everything is nostalgia. On all sides. Everything is about remembering what we loved from the past and then either remaking it, or making a sequel. And when we say the past, we mean way in the past. The closest we have to a movie that references things from not too long ago is the new Matrix movie, and the previous Matrix movie was in 2003 (The Matrix Revolutions.) So we’re talking about twenty years. And that’s the smallest age gap. So yesh, there’s something definitely going on here.

The four movies in question are Ghostbusters: Afterlife, The Matrix Resurrections, West Side Story, and Spider Man No Way Home. And three of the four of them came out in December (with the last being in late November.) So what’s going on exactly, and why? A best guess is that in 2020, when studios stopped making movies for the pandemic, but continues to plan for the future, they realized audiences needed something warm and comfy. They needed a break from the new and a return to the familiar. Something to get them over the sadness and depression of the pandemic. And so they looked to the past. To movies that audiences loved and wanted to somehow return to.

The amazing thing is that in two of these cases (Spider Man and the Matrix,) studios are cashing in on things that weren’t even considered good. They are literally taking things that audiences rejected and finding a way to give those things (or characters,) another chance. You see, now since theses notions are older and therefore nostalgic the idea is that audiences will still want them just because it reminds them of the familiar. In particular I am talking about Jamie Fox’s Electro in The Amazing Spider Man 2 and the last two Matrix movies.

When Fox was announced as returning as Electro, a lot of us did a double take. Why would they bring him back, when he was one of the most hated villains and villain portrayals? And then the answer hit… people don’t really care anymore. After all we have been through, we are now open to forgiveness and to second chances. And that’a exactly what Fox is getting here, with a new look, new costume and all new take on the character.

Now, let’s back-track a little and talk about each movie. Ghostbusters: Afterlife takes a new cast of kids (bringing forth memories of the Goonies and ET,) and unites them with the original Ghostbusters as well as some of the original Ghostbusters villains (Gozer, the Terror Dogs,) The movie goes for fan service hard and it really delivers. Even the music is the same as in the original movie, and I’m not talking about the iconic theme song. I mean the beat by beat, small comedic background music that is around every corner and moment of the film.

So that movie really got things started in terms of nostalgia and fan service. It is exactly what Ghostbusters fans have been craving for all of these years. And it was followed by West Side Story. When we spoke about The Goonies and ET a few moments ago, there was one man behind both of those projects. Spielberg. He’s also the guy who produced and inspired Super 8, another sci-fi monster movie that features a team of kids. Well, Spielberg might be the go guy when in comes to kids on a mission movies, but this time he’s doing something different. He’s remaking West Side Story. And of course there’s the expected chatter about how this movie didn’t need to be remade, because the original still holds up, but c’mon. There’s no way that kids today are watching the original film. It is still great, but at a certain point, young audiences need a new version of things. And this Spielberg version looks like it’s doing things right (if the trailers are any indication.) The look and tone of the film seem fantastic, and right on the money.

After West Side Story, there’s the Matrix Resurrections. Now, this is the movie that I am the least interested in and that is largely due to the fact that the last two Matrix movies were pretty bad. There’s a reason why we stopped caring about this world and these characters. But then there’s also something positive to note. Keanu Reeves has been getting bigger and bigger. His John Wick series has been huge. And excellent. And he’s generally thought of as an actor who chooses his projects carefully. So it’s safe to say that he probably wouldn’t have signed up for this one unless it was good. And also, in terms of the filmmakers (one of the Wachowski siblings who made the original,) why would she choose to make this if there wasn’t a good idea? I’m playing devil’s advocate a little bit here, really hoping for the best, but we will have to see with this one.

And then comes the most anticipated movie of all… Spider Man No Way Home. This one is the most like a direct sequel, since it does star actors returning to roles from the most recent years. The previous Spider Man movie with this cast, Far From Home, was in 2019. But the nostalgia comes in regarding the villains. This movie is bringing back all of the Spider Man villains from all past Spider Man movies, going all the way back to the original in 2002. From Willem Dafoe as the Green Goblin to Alfred Molina as Doctor Octopus.

The idea was clearly inspired by Spiderman Into The Spiderverse, which gave audiences the concept of this multiverse. It’s a door to different dimensions where other versions of a character exist. So in this case, there are alternate versions of Spider Man out there. Most likely Tobey Maguire and Andrew Garfield will be returning here, although you can expect their appearances to be brief, just like the original Ghostbusters who showed up at the end of Ghostbusters: Afterlife. Still, between them and the villains (and there’s going to be a lot of them,) this should be pretty great.

As far as the nostalgia goes, yes… audiences do want to go back to the familiar. It’s the reason why next year will give us Top Gun Maverick and an Avatar sequel (finally.) It’s also probably the reason why we didn’t get an Avatar sequel sooner. James Cameron is a smart man and knows that absence makes the heart grow fonder. The longer he waited on those and pushed them off, the more audiences craved them. That’s what he’s hoping, anyway. Based on all the good will around nostalgia movies these days, there’s a really solid chance that he’s right.