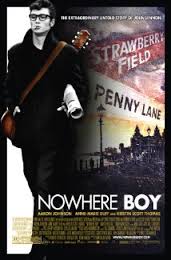 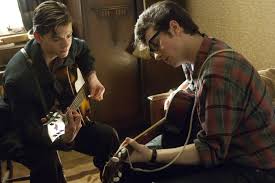 The bad news is it has very little to do with the beatles. the good news is it’s still kind of interesting.

Talk about false advertising, the cover for the movie nowhere boy has signs for strawberry fields and penny lane in the background. those names never even come up in the movie. in fact, no beatles songs really come up, and that’s a bit of a problem. i understand this movie didn’t want to spell things out and become too obvious and cliched, but at the same time it has to be honest with itself and recognize that people who are going to see it are seeing it because of the beatles. the movie wants to pretend like people are going to see it just for john lennon, and specifically for what john lennon was like before the beatles. that couldn’t be further from the truth.

this is the movie about john lennon as a boy. it’s about his childhood growing up, and really it’s about the two different women in his life and how he dealt with them. the first woman is mimi, played by kristin scott thomas. mimi is actually john’s biological aunt, the sister to his real mother. only she is raising john as her own, and has taken on the role of his mother.

early on in the film, one of john’s friends tells him that he knows where john’s real mother lives. the friend then takes john to meet her, and from there, she and john hit it off. his real mother is named julia, and she’s a bit of a rebel. she’s a sort of free spirit who does whatever is best for her and her own life, and at one point that included giving up her son. john likes her because, among other things, she is very different than mimi.

luckily this movie does include paul mccartney. i say luckily because this movie often seems so dead set on not being about the beatles, that i’m surprised it even did that. it actually seems like the film includes just enough to have some stuff to include in the trailer that might make the movie seem like it is about the start of the beatles. that’s what i mean by false advertising. if every moment that has anything to do with the group makes it into the trailer, than naturally we’re going to think the whole movie is like this. and then we are stunned when the movie turns about to be about something entirely different.

the movie isn’t about the beatles, it’s about john and these two women. mimi is tough and structured and julia is easygoing and laid back. there are no male figures in john’s life, although mimi did have a man who she lived with at the start of the film who was pretty close to john. in fact, in many ways that man seemed like the only adult who john had a decent relationship with. and then he died, leaving john and mimi alone together.

that’s about the time when john went off looking for his real mother and found her. and of course mimi doesn’t exactly like john spending time around this woman. she might be her sister, but mimi consider’s julia a bad influence, and in one case when mimi sells john’s guitar as a punishment, julia goes and gives him the money to buy it back.

as the movie goes on, john’s relationship with mimi becomes more strained as he continues to spend more time with julia. he feels like julia understands him better than mimi does and also understands how to enjoy life. mimi is too cold and angry with the world to ever relax about anything. all of this builds up to a climax where secrets end up coming out about the past. that’s the way these movies usually end up going, and this one is no different than most.

every once in a while we do get a scene of john with his band. he and paul are clearly the most talented of the group and there is one great moment where the two of them sit side by side playing their guitars and commenting on what the other is doing. they are listening to the sounds and experimenting. but that’s as close as we get to anything related to the beatles. we don’t actually get to hear the creation of a single beatles song. what a shame.

when oliver stone made the movie, the doors, he made sure to give the audience what they wanted, or at least what he would have wanted to see. and so we not only got a movie about the forming of the band, but also about their rise to success. and there was a very memorable scene in which the group got together in a garage on the beach and put together the song “light my fire,” piece by piece. we heard different variations on the song as the group experimented with it, and then as the keyboard player messed around with the opening beats. if only nowhere boy had done anything like that at all. this movie isn’t about the music of the beatles. it’s not even about the beatles. it’s about john lennon as a boy. it is definitely interesting, but not nearly as cool as it could have been. and the fact that the movie seems dead set on not pleasing the audience and throwing us a bone every now and then, makes it all the more frustrating.