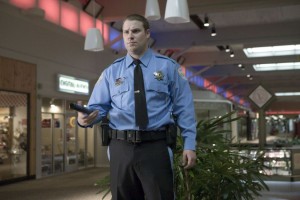 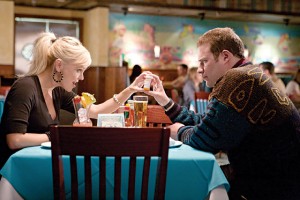 A lousy movie that tries way too hard to be funny and offensive and comes off as pretty stupid. instead.

Observe And Report was a lousy movie with good intentions. And by good intentions, i mean it tries to be very offensive and dark in the hopes that some of it will end up hitting as comedy. Not much of it does.

It’s a movie that is part of the judd apatow / eastbound and down camp, meaning part of the same new brand of movie that tries to get us laughing with cursing, sex talk, and blood. Superbad did it well (without the blood). then Pineapple express did it too. Same with the tv show Eastbound and down. And there’s even a medieval version in the movie Your Highness, that is able to pull it off. But this movie about a mall security cop just doesn’t have what it takes. That’s because it basically tries to stick only to the formula without getting creative or interesting at all.

The plot is very limited. A mall security cop wants to be a policeman and is dealing with a pervert flasher at the mall as well as trying to court a hottie who works at the makeup counter (anna Farris). That’s pretty much it. The pervert flasher comes back a few times and mall security cop seth rogen has to find him. Only there aren’t many clues. Just a polaroid picture of the guy’s penis. Oh and there’s also another girl who works at the mall and is much nicer to rogen and makes him coffee everyday.

The first half of the movie is okay. Seth rogen is a naturally funny guy. Either that, or he understands comic timing pretty well. And so he takes this movie about as far as it can go on the very limited plot. There are a couple of kind of funny jokes here and there. A lot of it comes from the supporting characters on his mall security team. Like michael pena, who never did break out big after his roles in crash and then world trade center. He was second only to nicholas cage in that movie, but now with this movie, he’s gone back to square one.

Ray Liotta comes in as the enemy to rogen, the guy who laughs at him and thinks he’s a big joke. And then Danny Mcbride stops by as a local drug dealer who has only one scene in the movie. it’s too bad. Mcbride is a hilarious actor. He proves that week after week with the tv show eastbound and down, and then again with his starring role in the movie your highness. But when only given one scene, there’s not a whole lot he can do for the movie.

There’s a date scene between rogen and farris that is in all of the previews. and it’s pretty funny as she gets totally hammered and he can care less. He’s madly in love with her and doesn’t care how pathetic that is. But after this scene, the movie plummets straight downhill, getting worse and worse.

Rogen fights off a ton of police officers. He and his buddy turn to drugs and beat up skate boarders. he intentionally smashes a glass counter at the mall. it’s so stupid. It seems as if the movie had nowhere to go. Maybe it felt that he needed to have that usual angle where the character falls down and loses his grip. Even so, it could have been done much better. He goes to levels that there is no coming back from, no matter what the movie tells us.

The big problem is that there really wasn’t anything here to begin with. No plot and not much that would make for good humorous situations. The movie was made by jodi hill, who directs a lot of eastbound and down episodes, and i am more disappointed with him than anyone else. He’s made the kind of movie that brings everything this genre has achieved down a rung. And that’s going all the way back to the forty year old virgin in 2005.