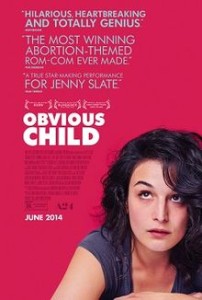 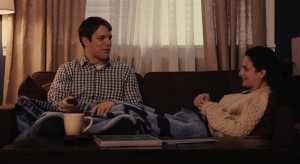 A movie that explores a somewhat familiar premise, yet does it worth a nice comedic touch and some pretty rich characters.

A pretty good movie with some sharp humor and a realistic storyline. This is a film about a girl who has a one night stand and ends up finding herself pregnant. If that sounds like Knocked Up, that’s because both movies have a similar jumping off point, but go in vastly different directions. Whereas that movie was about the pregnancy, this one is about the abortion. And while that might sound harsh, the movie isn’t really about that. It’s about this girl who was down in the dumps, and utterly miserable getting her life together. This is a black comedy, and most of the humor works in a way that shows off a new and interesting kind of energy. The film does get kind of generic by its end, but for the majority of the time, it’s a success.

Obvious Child is a pretty good movie for most of the way through. Unfortunately it does peter out in it’s final act or two, which leaves you thinking the movie was just routine in the long run. Only it wasn’t. For three quarters of the way, this movie was the kind of fresh and original free spirited film that had the courage to find it’s own way. That’s not to say that there’s some brilliant plot here, but just that a kind of familiar story is told with a new level of energy and humor, the likes of which, we really haven’t seen before.

Jenny Slate, an actress best known for having some problems on Saturday Night Live, (throwing out an F bomb on her first episode, which was also the season operner,) before getting fired from the show, is the star here. Slate is an original comedic talent, who showed off exactly what makes her so special when she played Jon Ralfeo’s brother on Parks and Recreation. Slate is a stand-up comic, and she might not be quite as red hot as Amy Shumer, (the biggest name in the world of female stand-ups right now,) but she has definitely got the potential to get there. This movie proves that.

It’s the film about a girl who has a one-night stand with a guy she meets, when she is insanely drunk at a bar, and then finds out she has gotten pregnant from him. The movie is smart enough to not get anywhere near that situation for a while, knowing that once it gets started on it, there’s only so far it can go. And so it plans it’s time well, and spends at least the first quarter of the film just setting everything up. We meet Donna, (Slate,) as she gets on the stage to do a stand-up routine and ends up talking all about her boyfriend, who is in the audience. He looks incredibly uncomfortable as she talks about their sex life and his junk and how it all works.

No sooner does Donna get off the stage then does Ryan, the boyfriend, tell her that it’s over. He’s been cheating on her with one of her friends. This breakup scene ends up being funny for a number of reasons. One is that they are in the bathroom, having the talk, and men keep coming in and out of the stall behind them. Another is the idea that anyone using the bathroom right now is listening to their breakup. And then there’s the way that Donna speaks of the woman who Ryan has been cheating on her with, claiming that Donna was always suspicious of her, but just thought she was being paranoid. Turns out that chick was “a slutty bitch after all”. Something funny like that.

Donna gets pretty depressed and hung up on the guy who left her. In one great scene, she stands freezing, outside of his apartment, waiting for him to come out so that they can talk. Donna talks to herself about what will make her leave, saying things like, “if the woman with the black hat crosses the street, I’ll leave,” and each of these things on her list do end up happening. Only Donna stays and just makes up more things like that, hoping one of them won’t come true so that she can stay. From here, Donna has her worst comedy set ever, where she gets insanely drunk and then goes on stage, spending the entire time talking about how lousy her life is. This naturally just depresses everyone in the audience.

When Donna gets off stage, she hits the bar in the other room and ends up meeting a nice guy named Max, who somehow didn’t see her set. He’s there with clients, and he missed the whole thing. Max and Donna hit it off, and the next thing you know, they are spending the night together. That includes both of them simultaneously peeing outside of a building, and doing some underwear dancing in her room, before they get down to business.

Pretty soon, Donna discovers that she is pregnant. She makes this discover while hanging out with her best friend, Nellie (Gabby Hoffman.) The thing to do, without question, seems to be to get an abortion, and Donna knows it. Still, she debates whether or not to tell Max, especially since she thinks she might never see him again. Only she does. He comes to her book store to see her and Donna ends up inviting him to one of her shows. But when he gets there, he finds that she has changed her mind about peforming that night, and is instead leaving with another comedian, to go and hang out. It’s weird, because she’s not going off to hook up with this older comedian, (played by David Cross,) but just to have fun in a way that clearly does not include Max. She is playing it safe, and not taking any chances with the new guy who she knows she likes, but who can also end up hurting her. Instead, she hurts him. We’ve seen storylines like this, about a character turning away any chance of love because of being afraid of getting hurt, going all the way back to movies like Breakfast at Tiffany’s and stories like Great Expectations. That’s what I meant about the movie not necessarily exploring new ground, even though it’s humor level is certainly something we haven’t seen before.

Aside from Donna’s friend, we also spend some scenes with her boss at the book store, and her parents. The boss situation is that the store is going out of business, and for Donna it is just one more sign that he life is falling apart. The boss is a laid back, older guy. He’s a hippie who has no problem putting the store behind him, and Donna can’t believe how relaxed he is about all this. She wishes she could be that okay with it. And then there are her parents, who couldn’t be more different. Donna has a playful and humourous relationship with her dad, (played by Richard Kind,) and a much more serious one wiht her mom. As it happens, her mom is also the professor of Max, and Donna and Max cross paths again one day when he comes to her mother’s house to return a book.

By the final act of the film, there are two questions going on inside the viewers head. Will Donna get the abortion, and will she tell Max. I won’t spoil either one of those, but to say that the answers are more than satisfying. In fact, they are maybe a little too satisfying. This movie could have benefitted from some major surprise scene here or there. Not so much a twist ending, or anything like that, but more of a scene that was just unpredictable and psychologically deep. Kind of like the scene at the end of Warrior where Nick Nolte starts drinking again and just goes nuts. It doesn’t really effect the plot, about the two fighters, but it is certainly memorable. This movie needed more memorable moments, especially in its second half.

Obvious Child is a good movie because Jenny Slate is on her A game and shows that she is a very strong comedic talent, worth watching. The humor isn’t always perfect, (the are more fart and poo jokes in here than one would expect,) but there’s a whole lot that works and Slate is at the heart of all of it. It’s always nice to find a movie that treads over familiar territory and does it with a new kind of energy or passion that makes the film still feel unique. 500 Days of Summer is another movie that did that same sort of thing. It’s kind of sad that Obvious Child doesn’t do enough to distinguish itself from the pack, and make it anything memorable. Still, for announcing Jenny Slate, and showing what she is capable of, if for nothing else, this movie is a real winner.