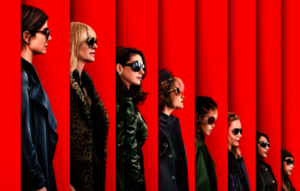 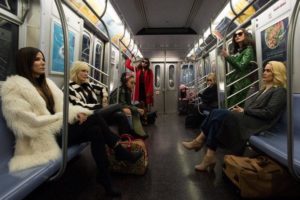 A not-so-entertaining attempt at remaking the heist trilogy, only this time featuring a cast of women instead of men.

Not a great movie, this one follows in the footsteps of the previous Ocean’s movies, (a trilogy starring one of the biggest A list casts of all time,) which itself was a remake of a Frank Sinatra Rat Pack film. The new version stars an all female cast, and unlike the all female Ghostbusters, (which was also a mess,) Ocean’s 8 does not star a pack of comedic actresses and does not have a super talented director at the helm. The result is pretty mediocre. Sure, there are some cool ideas here, like setting the heist at the MET museum and making it shout stealing jewelry off a guest there, but the overall characters, jokes, and scenes generally don’t work. There’s not enough of a spark with this one, and considering what it’s competing against (the previous Ocean’s movies,) it certainly needed to offer us more.

Ocean’s 8 is just an okay movie. If compared to the Ocean’s trilogy of the 2000s, this one would actually not be ranked last. It would come in ahead of the second movie, Ocean’s Twelve, which was absolutely awful. But it would also not be anywhere near the same ballpark as either the first or third film. And as far as being it’s own thing, and not compared to those others at all… this movie really isn’t all that good. The idea of remaking the series with a team of women instead of men works, (just like the idea of remaking Ghostbusters with a team of women seemed like it might work too,) but neither one turned out to be as promising as it appeared.

Let’s start with this.., why are we remaking these movies with all women? Is it to prove a point that Hollywood has been unfairly cast by way too many men? Are we just going to do this for all male movies? There’s already been talk about doing it for the Expendables, (with a movie that is rumored to be called The ExpendaBelles,) and also with the Fast and the Furious series. And while those do sound kind of interesting (especially the Fast and the Furious idea,) here’s a better one…let’s just start putting more women in these movies to begin with. Get more women into the Fast and Furious series. And make original projects that star teams of women (like the DCEU is doing right now with Birds of Prey, a superhero movie featuring Harley Quinn, Huntress, and Black Canary – worth noting, the absence of most known female super villains such as Catwoman or Poison Ivy.) But so long as they just turn out remakes of male led movies, these movies will remain in the shadows of the original films. They will always be compared to what came before it.

And as much as that sounds unfair, it’s also pretty reasonable. You can’t have a Goonies remake, for example, without comparing it to the original film. But if it’s an entirely new concept, (like Birds of Prey,) then there’s nothing to compare it to, and that’s really the way it should be. Unfortunately with Ocean’s 8, this is not the case. The movie wisely takes the story away from the casinos, (where it was set in the first three films,) and puts the heist in The Metropolitan Museum of Art during the Met Gala, a big art exhibit that is held once a year. The clever idea here is that the women will not be stealing art (like in the Thomas Crown Affair.) Instead, they will be stealing jewelry off of one of the actresses in attendance. All of these ideas are pretty good. If only the movie was able to fill in the gaps between them a little better to make the storyline flow cohesively.

The start of the movie shows us Debbie Ocean (Sandra Bullock,) at a parole hearing, giving her story and talking her way into an early release. It’s the exact same way that the first Ocean’s film began, (not the Frank Sinatra, Rat Pack original movie, but the George Clooney film, of course.) The difference, however, is that in the first movie this scene was filled with style and pizazz. Vibrant colors and sounds dominated. It was a Steven Soderbergh movie, and he was bringing his A game to the table. He and a Clooney were following up their first movie together, Out of Sight (an amazing film,) and they were going all in with this one. Compare that to the director they got here, for Ocean’s Eight… Gary Ross. This is the guy who directed Pleasantville, The Hunger Games, and Seabiscuit, all movies that were okay, and not a one of them that was anything special.

But that’s just the movies first mistake. The second one is to make Debbie Ocean out for revenge against the guy who who her away. It’s a little too similar to the first movie, (Clooney’s character, Danny Ocean, had a hidden agenda of trying to win back the girl he lost, Tess, played by Julia Roberts.) It also feels kind of arbitrary. Like does Debbie even care about the money or does she just care about putting this guy behind bars? In the first movie, you were most certain that Danny cared about the money. Winning Tess was just a nice bonus. Here’s the thing, if you’re trying to make a movie about a female thief whose particularly good at robbing, why then make it that the whole thing is because she was betrayed by a man, who she’s now out to get? Why not just keep it to the women and the robbing? I know Ocean’s Eleven did this with Danny and Tess (kind of,) but that’s just one more reason not to do it now…keep the comparisons to a minimum.

Speaking of Danny, there are quite a lot of references dropped about him. Debbie is playing his brother, and we learn early on that Danny is supposedly dead. Then we get appearances by Elliott Gould and one other member of the original team. But not one of the bigger or better ones. Here’s something that would have gone a long way… have Julia Roberts be one of the members of this team. Maybe even a hidden benefactor (this movies version of the Eliott Gould character, perhaps.) That way, her appearance could be a surprise, she would be a connecting member who was on both teams, (the Clooney Ocean’s team and now this one,) and also, we’d finally get to see Roberts and Bullock in a movie together. No such luck.

Instead, this movie just wants to get every attractive woman it can find and put them together. Where are the older or heavier women? This movie isn’t interested. It’s going for a certain look, and it is all too obvious about it. The Ocean’s trilogy might have had Clooney, Brad Pitt, and Matt Damon in it, but it still made time for two old guys (Elliott Gould and Carl Reiner,) and even a nerdy guy (Livingston Dell.) The reason… because it knew the importance of being funny. Get a Bernie Mac in there to tell some jokes. Give Don Cheadle a hilarious cockney accent. Comedy is king. That’s what counts. Make the movie funny.

The Bullock movie on the other hand isn’t smart enough to work the comedy angle. If it was, there would be an Amy Schumer or a Sarah Silverman or at least a Kristin Wiig on hand. And that leads to two things that the female Ghostbusters movie had over this one. A better cast and a better director. Some will look at Mindy Kaling, who is in this movie, and say, “there’s your comedic actress right there.” And there’s a point to be made there. But Kaling is not enough. One out of eight actresses bring from comedy doesn’t make the cut (again, compare that to the Ghostbusters remake which featured four out of four actresses from comedy.) Kaling is great, but it’s unfair to put all the comedy of the movie on her.  And wonderful as she is, she doesn’t quite have what it takes to characterize the tone of this movie and get the comedy right. Not when she’s such a small part.

So the comedy is lousy, but some of the key ideas are pretty good. The heist itself, involving a special kind of magnet and a bathroom confrontation work out nicely. Unfortunately it’s one of the few moments in the movie that really feels like a success. One of the other ones comes early on, at the start of the film. After getting out of prison, Debbie goes and pulls a couple of low level scams. She grabs something off the shelf of a store and tries to return it. When they won’t take it back, she says, “Great, now I have to keep this thing,” and walks off. She also goes into a hotel, listens for the name of someone checking out, calls the hotel and uses that name to keep the room an extra day, paying with the credit card they have on file. These scenes are fun and clever. The movie could have used more of that.

The other moment that is pretty cool involves the way the team replicates the diamond necklace that they plan to steal. This involves Helena Bonham Carter using a special lens to stare at the necklace while the lens transmits its exact image to a 3D printer. This is Mission Impossible type stuff (the way they use a machine in those movies to make the masks.) More crafty scenes like this would have gone a long way. The movie as a whole, isn’t bad, but it’s also far from anything great. The characters are pretty flat and the comedy leaves a lot to be desired. Plus there’s not nearly as much style or artistic creativity as you would hope to get from a movie like this. Most likely there will be a sequel, since the movie did pretty well. For that, here are two quick suggestions… add more stand-up comedians to the cast, and get a more lively director. One who can bring a unique energy to the film, the way Soderbergh once did. Decisions like those make all the difference.