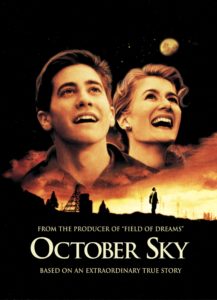 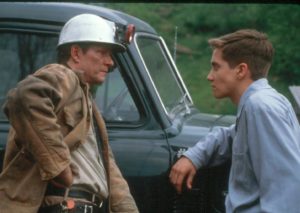 A fantastic movie about taking chances and trying to get into the science fair, despite all kinds of challenges and problems along the way.

This is an absolutely wonderful movie. It’s the film about a couple of kids who pursue rocketry in the hopes of bringing their passion to the state science fair and hopefully earning a scholarship that will take them to college and away from their town. This seems like a pretty simple and uneventful premise, and the truth couldn’t be more the opposite. The movie is loaded up with conflict, from a father who works at the mine and has no patience for the rocketry project to a principal who doesn’t support the boys at all and wants their whole project thrown out. The boys run into conflicts with the police, with family injuries, with stolen rocket parts, and even with figuring out who to make the whole thing work to begin with. All of this makes for one hell of a story and a pretty remarkable and inspirational film.

October Sky is a fantastic movie. It’s a story about really going for something, and pursuing it against all odds, when everyone else thinks it’s ridiculous. The movie takes place in the fifties, in a small coal mining town, and all of this shows us a very different walk of life than we are used to seeing today. And yet the ideas here are completely relevant and understandable to today’s current climate and situations. This is a movie about a boy named Homer, who gets inspired by Sputnik, (the Soviet satellite which was the first satellite ever to successfully be launched into space,) and decides that he wants to pursue rocketry as well.

Homer (Jake Gylenhaal,) starts asking questions about rockets, and gets his two best friends to go along with trying to build one. They put something together and launch it outside of his house, and the rocket ends up blowing up a small portion of his mom’s white picket fence. But that doesn’t make Homer stop. It only makes him want to know more about why it didn’t work, and try out some new ideas. Even his friends think he’s a little nutty at the time, and is just wasting his time, but they’re curious, and want to see where this ends up going. So they come along for each of Homer’s tries.

Homer’s father is the boss over in the coal mine, where nearly everyone in the town seems to work. Homer even gets help building a piece for the rocket from one of the workers there. But it’s not enough. Homer recruits a kid in school who is known to be the biggest nerd and bookworm. Everybody makes fun of this kid, all the time, (he’s played by the kid who played Sherman, The Sherminator, in the American Pie movies,) but Homer doesn’t care. And the scene where Homer approaches this kid in the cafeteria, and everyone becomes silent for a moment, is pretty funny. But the kid turns out to be a lot of help, and almost as passionate about the project as Homer is, and he quickly joins the team.

Now the boys form a foursome, and start taking their project a little more seriously, with the hope that if they get into the state science fair, maybe they can use it to get scholarships to college. This is a town where the only two things going on are the coal mining and football. Homer’s older brother plays football and gets a scholarship based on his athletic ability. For Homer, that’s not a possibility. We even see him try out for the football team in one of the earlier scenes, and fail miserably. He’s got the determination and attitude to talk tough to the much bigger guy who he’s facing down, but he gets tackled badly every time. So clearly football isn’t the way for him to go, but with rocketry, he finds another possibility of how to get out of the town.

Homer is met with a lot of opposition throughout this movie. The most important force against him is his father. Homer’s father is a practical and very simple guy. He represents the town, and believes in only two things… the mine and football. The argument is made throughout the movie that he loves the mine more than he loves his own family. And he has no tolerance for the rocketry that Homer is pursuing. When he finds out about it, he forbids Homer from launching rockets on any land that is owned by the mine. That pretty much means the entire town. And so Homer and his friends need to go out of town to find a deserted area, that is not owned by the mine, where they can launch their rockets. Once they find it, they build a little wooden booth or screen that they can get behind for safety, while watching their rockets take off.

But Homer’s father isn’t the only force of opposition here. Another one is the principal. Like Homer’s father, this man has seen nearly all of the graduating students go on to get jobs in the mine. Once in a while, one of them is lucky enough to get a football scholarship, but for everyone else, it’s the mine. And he’s realistic about that. It’s Homer’s teacher, Miss Riley, (Laura Dern,) however, who is the most inspirational figure of all. She’s the one who encourages Homer and his friends from the very beginning, and even supplies him with some of the things he needs, including books on the topic.

But just when things seem to be going well, and the boys have got a following in the town of people who come up to the location to watch their rocket launchings, a new problem develops. Police show up at the school and arrest Homer for and his friends for a rocket that they say started a giant fire. For a while, they didn’t know where the fire came from, but then an article was written about Homer and his friends in the local paper, and suddenly the police had their answer. Homer and his friends are forced to quit the rocketry and they set fire to the wooden booth they built. The dream is over. And things are about to get even worse.

Homer’s father gets injured at the mine. And what that means is that his family suddenly has no money coming in. These workers live on their paychecks, and that even goes for Homer’s father, who is in charge of the men. When he goes down, the whole family finds themselves in trouble. Homer decides to quit school and start working at the mine to bring in money for the family. We watch him first give up on his dream of rocketry and science, and then give up on even being a student at school. It’s a one-two punch that really brings the movie into a dark place.

And as if things couldn’t get any worse, Homer learns shortly after this, that Miss Riley has a terrible disease, and is dying. He goes to see her, hoping to lift her spirits, and she ends up inspiring him to quit the mine, go back to school, and even consider taking up rocketry again. Homer’s father has gotten better by this time, and so he’s able to go back to work, but that still doesn’t solve the problem with the police over the rocket starting the fire. That’s where Homer and his friends have to start figuring things out. They know that if they’re ever going to be permitted to launch another rocket again, they first have to prove that it wasn’t their rocket which started the fire. And so they use math to calculate where the rocket went and go and find it. And the movie doesn’t shy away from showing us exactly how this works. In one terrific scene, Homer explains it all to the principal, using a chalk board in the classroom to show exactly where the fire was and how they’re rocket could not have reached that area.

But then there’s the issue of Homer’s father. The man has been incredibly proud of Homer since his son took up working in the mine, and now Homer wants to give that up and go back to school. The two of them have some pretty heated conversations throughout the film, with a young Gylenhaal really holding his own agains the great Chris Cooper. And in one scene towards the end, Homer explains to his father that the mine is not for him, and that he has to pursue his dream. From that point on, it’s more or less a straight line to the science fair. But don’t be fooled. There’s still plenty of conflict ahead, including a stolen rocket part and a union strike at the mine that threatens Homer being able to get a piece rebuilt for his presentation. There is so much conflict in this movie, and so many great moments of character opposing each other and either standing up to each other or proving each other wrong, that it makes for a pretty amazing film.