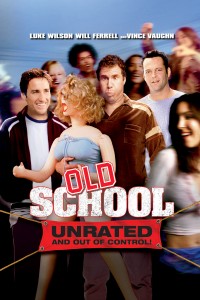 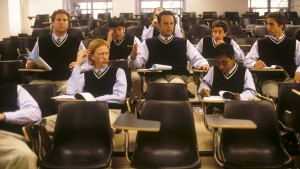 A very funny movie about slacker guys taking it to a whole new level when they open up an adult fraternity on a college campus.

Old School is a very funny movie about slacker men going back to the days where life was all about drinking, partying, and getting laid… The college days. It’s about a bunch of guys who start a fraternity. What makes it so hilarious is that they’re all middle aged men. They are well past college age. And they are pretty much doing it all just for fun.

The story is pretty simple and straight forward. Three characters, each with their own lives and problems, come together when one of them buys a house on campus. That main character is played by Luke Wilson who is perfectly cast as the everyman, the guy who can’t believe how ridiculous everyone is being around him. He’s the voice of rationality and the guy the audience can relate to.

Vince Vaughn plays the ring leader. This is him in the kind of role where he’s best. He’s the instigator. Remember him playing Trent in Swingers, the role that made him famous? Well, he’s pretty much doing the same thing here. He’s plotting and planning and pulling all the strings to encourage his best friend to get back into the wild. Just like Trent trying to get Mikey to leave his house or to approach a girl at a bar, Vaughn playing the character Beanie in Old School, does the same sort of thing. He even gives a similar speech to one he gave in Swingers, making analogies to cute little animals. In Swingers he talked about bears and bunny rabbits. Here he’s comparing Luke Wilson to an injured young fawn being nursed back to health.

Will Ferrell plays the third friend who is the real nutcase of the group. Vaughn is the cool guy with the tricks up his sleeve and Ferrell is the loose cannon. He’s getting married at the start of the film and Vince Vaughn is right there beside him, standing at the altar, whispering “don’t do it,” as he coughs to cover it up. Vaughn’s character might be married, but he loved the single life and certainly has his regrets. Now he doesn’t want to see one of his friends make the same mistakes.

Luke Wilson is also recently single at the start of the film after walking in on his girlfriend, Juliette Lewis, being part of a gang bang. You have to give it to director Todd Phillips to come up with something like that and to open his film up with it, no less. This is the guy who made Road Trip, a fantastic college comedy, and before that he was one of the drivers on the HBO uber-sexual series Taxi Cab Confessions. Phillips knows comedy and he knows how to show grown men who want nothing more than to party like they did when they were in college. That’s probably because he’s one of them himself. Seven years after making this movie, he was at it again with The Hangover, lining up a whole new cast of characters for a film that somehow managed to take the same general idea and make a masterpiece out of it.

Old School is the original. It’s the film that kept things simple. Adult men start a fraternity. They throw parties, like one that features Snoop Dog performing. They pull pranks. And they get respect from other men wherever they go. While all of this is going on, the Luke Wilson and Will Ferrell characters are dealing with their own problems in the ways of romance.

Will Ferrell, recently married and now having doubts, is a constant frustration to his wife. He takes on her oral sex teacher in a fight, goes streaking around the college campus, and opens up to her about fantasizing about other women as if he doesn’t realize what her reaction might be. This is one of Ferrell’s best movies. That’s because he gets to be a side player and doesn’t have to carry the whole thing all by himself. It works for him in two ways. First, his antics never get tired. And secondly, the times that he’s not on screen, the other guys are carrying the movie, keeping it suspended in hilarity, just waiting for him to come back and do something else great. It’s like a game of volleyball where the three guys are constantly setting each other up for spikes.

Vince Vaughn is dead on the money with this role, and like Ferrell, it’s because he’s a supporting player. He gets to be the cool friend instead of the main guy with problems. Vaughn’s biggest problem is that he’s bitter and resentful, two things that make his outlook on life just perfect for comedy.

Luke Wilson is also cast perfectly here as he tries to balance everything out with work, the fraternity, and the girl he’s interested in who just happens to be dating a total jerk. He’s the real romantic of the group which is just perfect for the other two because it gives them plenty of opportunities to be the fools. Vince Vaughn is the sly fool with outrageously crazy ideas. Will Ferrell is the dumb fool who is basically doing slapstick material.

The movie is great because it takes a wild idea and just runs with it. It never looks back and it finds ways to up the ante at every turn, keeping the ridiculous antics moving at rapid speed. A backyard kids birthday party, for example, turns into a guy getting shot by tranquilizers and falling into the pool. Phillips has no shortage of ideas here and the cast really makes everything feel fresh and creative. The jokes all land just right, pulled off by perfect delivery. Half the fun is watching what happens, the other half is watching the reactions these guys have to it all. The Hangover might be the ultimate road adventure movie, but Old School is the ultimate fraternity house movie for today’s generation. Animal House was last generations version of this movie. For our time, it’s these guys, the members of what would later include Jack Black, Owen Wilson, and Ben Stiller and come to be known as The Frat Pack. Between this, Anchorman, Wedding Crashers, and Starksy and Hutch, the frat pack certainly had its day in the sun. And Old School is not only the movie that kicked it all off, but it’s also the best film of the bunch. It’s the movie that stripped things down to the very basics and made us all laugh at how funny grown men with nothing to lose could actually be.