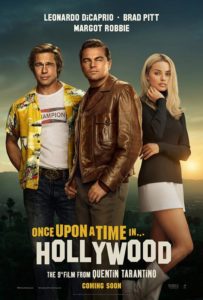 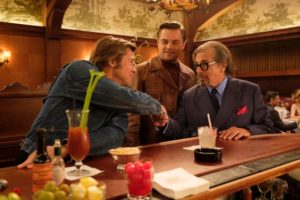 Plenty to like, but not the best Tarantino movie, this one has some fun ideas, but the overall plot seems to not have us much direction or focus as usual,  and that makes It hard for the audience to invest in the characters.

Not one of the better Tarantino movies, there is plenty to like, including a fun performance by Brad Pitt, but the movie is just a little too slow. Chalk that up to the subject matter…aging Hollywood actors as opposed to the usual Tarantino fare… killers and revenge. This is the quietest Tarantino movie yet, and that includes Jackie Brown. And the other thing working against it is that his characters are depressed. But Tarantino finds the angles in this story and plays them right. It’s not as entertaining as usual, but it’s still a good time.

Once Upon A Time in Hollywood is Quentin Tarantino’s ode to the industry, the same way that say Steven Soderbergh did his take with the movie Full Frontal, and Ben Stiller did his comedic take with the movie Tropic Thunder. So for Tarantino, that means telling it as a period piece and setting it in his favorite time period, the late sixties / seventies.  Tarantino is one of the most talented filmmakers working today, (and some would say one of the best of all time,) and he always finds a unique way of looking at a genre or time period. With this movie, things are no different. The atmosphere is superb. And the dialogue is pretty good, (not up to his usual caliber of excellence, but pretty good, none the less.) The problem is that the characters and story don’t keep us glued to the screen the same way that we usually are with one of Tarantino’s movies.

Just look at some of his previous films for a moment. Reservoir Dogs put us right at the center of a getaway, inside the safe house with the burglars and killers. Pulp Fiction put us inside the lives of hitmen who blew a mission. Jackie Brown put us inside the lives of a woman pulling a scam on multiple dangerous parties at once. Are you seeing a pattern yet? Danger. Stakes. The list goes on. Kill Bill put us right there with a deadly assassin on a revenge mission. Django Unchained and Inglorious Basterds were also revenge driven movies. And The Hateful Eight was a murder mystery, set inside a log cabin. With Once Upon A Time in Hollywood, for the very first time, none of our leads is a killer, (unless you consider what most likely happened to a character’s wife, in the past.) None of our leads is a criminal or a threat in any way. And that automatically makes this a very different kind of movie.

This is the movie about an industry. Now, of course there is a threat out there, looming in the background, in the way of the Manson murderers. In real life, Charles Manson had a bunch of his followers kill Sharon Tate and other guests of hers who were spending the night at her house. But in this movie, that story is in the background. This isn’t a movie about Sharon Tate. She is here, to be certain, (played by Margot Robbie,) but she has very little to do, and is absolutely a background character. The leads here are Leonardo Dicaprio and Brad Pitt, and the story is all about their characters.

Dicaprio plays Rick Dalton, a washed-up actor of the westerns. He’s at the point in his career where he’s just realizing that he’s washed up, and a has been, and it is hitting him pretty hard. Brad Pitt plays Cliff, his stunt double and assistant. The two of them both share a story about not really being wanted by the industry anymore, as the industry is evolving and changing. It’s not exactly a feel good place to be, and that’s another factor that contributes to this movie often feeling like a bit of a downer. It’s interesting for a while, especially when other characters, who are outside of what’s going on, (like the Al Pacino character,) put things in perspective. But it also gets somewhat depressing. The only time we’ve ever experienced feelings like this in a Tarantino movie were in Jackie Brown with the Robert Forster character feeling outdated and past his prime, and that was Tarantino’s slowest movie (but also, what is considered to be his most mature.)

The positive is that this storyline gives us a really nice look into the industry and what the behind the scenes conversations must have been like. It all starts with a legend of the cinema, Al Pacino, playing a producer, (in a role that was meant for Burt Reynolds, before he passed away.) The producer meets with Dalton and Cliff and sits down at a table with Dalton to make a proposition to him. But before he tells Dalton the idea, he first lays everything on the line, putting Dalton’s current acting situation into perspective. He tells Dalton that right now, Dalton is in a place where he is playing the “heavy” (main villain,) on a different TV show every week. He only does one episode of each show, (how times have changed… these days a villain can last an entire season or even series,) and loses the fight to the hero at the end of each episode. And that’s the problem. Every week, audiences are seeing him lose. And as he loses more and more fights, the brightness of his star is slowly fading. Audiences are slowly getting to the point where they will no longer buy him as a leading man. The producer proposes that Dalton go to Italy and start making Spaghetti Westerns instead.

And Dalton takes all this to heart. He starts drinking heavier and losing his focus on the set of films. We watch him flip out in his trailer, about how much he’s messing up. And at one point, he has a conversation with a little girl, where he does some therapy on himself, by analyzing a character of a book he’s reading. But there is no woman in Dalton’s life and no family. He’s a lone bachelor with only one real friend, his buddy Cliff. And for all he knows, Cliff is not so much a friend as an employee. Dalton doesn’t just use Cliff as a stuntman or stand-in on films, but ends up using Cliff for tasks around town or around his home, such as getting up on the roof and fixing his TV antennae. So it’s easy for Dalton to wonder if Cliff would even really be his friend if he wasn’t getting paid. None of this is explicit in the film, and that’s one thing beautiful about Quentin Tarantino movies. He gives you a lot to think about and figure out for yourself.

Cliff is an interesting character himself. In fact, if Dalton is the more unlikeable, because of both his arrogance and depression, than Cliff is the more charming, Hawaiian-shirt wearing, fun-loving sunshine kind of guy. Except for one thing. He most likely killed his wife. We hear about it from characters who talk behind Cliff’s back, and then in one quick flash of a scene, we see what the moments were that led up to his wife’s death. The two of them are out on a motorboat, in a flashback, and his wife is going off on Cliff about what a loser is. Then we see the harpoon resting next to Cliff, and see that it is pointed directly at his wife. We see it from the angle of the harpoon itself, showing us just how easy it would be for him to pull the trigger or say it was an accident, or maybe even make the whole thing look like an accident, in case anyone was close enough on the open water to see what happened.

But other than that, (and that’s obviously a big thing,) everything we see of Cliff in this movie is that he’s a wonderful guy. He’s the motivational speaker for Dalton, helping his friend stay on the right path of positivity. He also gives a ride to an attractive hippie woman, and then rejects her advances because she is under-age. He’s adventurous enough to get out of the car and walk around a commune filled with threatening youngsters. He’s also caring enough to go check on a man who was once his friend, an old man, played by Bruce Dern, who now provides the land and housing for these hippies. That sequence, where you keep thinking that something terrible is about to happen to Cliff at any moment, is fantastic. And Tarantino knows that it’s power comes from suspense, but also doesn’t want us to feel let down at any time, so provides a fight scene at the end.

Speaking of fight scenes, there’s the scene on the set of the Green Hornet where Cliff takes on Bruce Lee. Yes, Tarantino has an actor playing Bruce Lee in this movie. Sounds pretty great, except for that Lee is portrayed as arrogant and not especially nice. And so Tarantino has gotten a lot of backlash from that. So what? It’s a funny scene, as Cliff calls Lee out on his trash talking, (Lee says that he can take Muhammad Ali, and Cliff says that Lee would just be a stain on Ali’s seat.) The two of them challenge each other to a competitive fight, after discussing terms and why they can or cannot fight. This is actually some of the best dialogue in the movie. It’s witty and fun and fast moving, the way great Tarantino dialogue usually is, setting up the terms of a situation and both the pros and cons. And then we get the fight, and that’s pretty fun too. So is the aftermath of it, involving Kurt Russell’s stunt coordinator and his wife, (played by Tarantino favorite Zoey Bell.)

It is the Sharon Tate character who gets left out the most here, and that’s a real shame. This is the story of the two boys.  Tate’s character really has one scene all to herself, where she goes to a movie theater and sits in the crowd to watch herself in the film. She’s here because this is Tarantino’s “Manson Murders,” movie, only it really isn’t, and just uses that for setting. The movie does end with his take on the murders, which is wildly creative, and definitely one of the best parts of the movie, as any great climax should be. But this one is hardly about the murders or murderers. Instead, it’s about the industry. There’s a great scene where an actor is playing legendary actor Steve McQueen, (Damian Lewis from Homeland and Billions,) and he’s talking about Tate’s relationships, and why a former flame of hers now hangs around as just a friend, even though Tate is with Roman Polanski. This is the kind of insider knowledge that Tarantino has and is able to spin into funny dialogue, where even the great Steve McQueen feels like he never had a chance with Tate. There’s a lot of good in this movie, even if there are times where it feels a little too slow or dull. It will take multiple viewings to really have a handle on this one, and where it fits in with other Tarantino movies, but it’s definitely towards the low end. Not one of his better films.