One Hundred and One Dalmatians *** 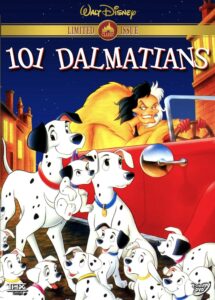 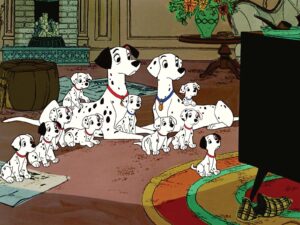 An okay Disney movie that starts off pretty good, but then ends up really slowing down and taking its time the more it goes on.

This is a solid classic Disney cartoon. It can’t compete with the best, by any means, but it sure does start off promoting enough. The first half features meet cites, marriages, babies, and kidnapping. The second half is simply the rescue. That means a whole half of the movie is devoted just to the rescue. It definitely stretched that idea out for too long. But even still, the English humor and lively characters carry it through to the end.

101 Dalmatians is one of those movies that is fine on a first viewing, but definitely gets better and better each time it is seen after that. And even on the first viewing, what’s very clear is that the first half is great and the second half is just okay. This is an eighty minute movie, that spends the last forty minutes kind of trapped in the climax. Now, if there’s a part to get trapped in, the climax is it, but the truth is no movie should spend half its runtime stuck in the same plot point, no matter what it is. Luckily the first half of the movie is so good, that it makes up for this.

The story starts off with a voice over narration talking about things like life, socializing, and romance. The person giving us this narration… well, it’s not really a person at all. It’s Pongo, the male Dalmatian pet of George. Only when Pongo introduces himself to the audience, in an upper-class, eloquent English accent, he says that George is his pet. And then he goes on to tell us about George, who writes songs about romance despite the fact that he knows nothing about romance at all. This whole opening monologue is very witty and smart.

So Pongo decides to find someone for George. He looks out the window, and down at the street, and his narration continues. Pongo points out how some dog owners and dogs look alike. And then we see a number of examples, including a tall thin woman with shaggy hair like a mane, just like her dog, another woman who looks like her short, stout pug, and another who looks preppy and uptight and has glitter all over her jacket and hat, just like her did has on her jacket and tail. And then Pongo sees her. The Dalmatian dog of his dreams. What’s funny here is that he was supposed to be looking for George, but ends up looking more for himself.

He pulls a trick on George with the clock (which the voice over explains,) and then rushes George out the door to take him on a walk. The whole thing ends with Pongo spotting the woman and her Dalmatian, Pedita, on a bench, unintentionally chasing them away, wrapping his leash around them, and tripping them both to the point where they fall into a pond. The two of them start talking, first out of anger (on her part,) and then at laughing at how silly they must look, and then next thing you know they are getting married.

The wedding scene is quick, but it does include a funny moment where George and Anita (Pedita’s owner,) are exchanging vows just as the dogs are standing in the background, paw in paw, supposedly getting married as well. And then we are back at the house, this time meeting a new character… a nanny, and hearing about how Pedita is pregnant. That’s when Cruella shows up. Both Pongo and Pedita sense here coming before she even arrives. Cruella Deville. A tall, lanky, gawky villain who wears giant fur coats and waves a cigarette in a holder around, like she could care less where her ashes go and who gets hit.

Cruella bursts through the front door accompanied by thunder and lightning in the background. She demands to know where they are. Anita asks what she’s talking about, and Cruella explains she means the puppies. All of this implies that Cruella and Anita have most likely never spoken of the puppies before, and that Cruella just heard around town that Anita had a Dalmatian that was pregnant, and stormed in as if Anita knew exactly what she wanted. We learn from George that Anita and Cruella were old schoolmates, and George even writes a song with no lyrics, that he later adds lyrics to about Cruella Deville.

Cruella leaves, making it very clear that she wants the puppies and wants to be notified about them as soon as they are born. And then we get the birth scene, where we wait in the room outside with both George and Pongo looking incredibly nervous. The scene involves hearing the count of how many puppies there are from the Nanny, who keeps calling out more and more numbers. And there’s a very strange moment involving a stillborn puppy scene that George somehow rubs back to life. Not the kind of thing you would usually find in a children’s movie.

Not long after this, Cruella comes back and George refuses to give her any of the puppies. It’s kind of funny because we never saw George and Anita discuss it, and instead it’s kind of like it’s his decision and whatever he says goes. All this despite the fact that Cruella and Anita are supposedly old friends. A little more about the relationship between these three characters, and specifically between Cruella and Anita, would have gone a long way. But Anita stands by George’s decision, and Cruella leaves empty-handed.

But she’s not done yet. Two burglars arrive at the house one night, while George and Anita are taking Pongo and Perdita out for their evening walk. The burglars are fun characters with heavy cockney accents, saying things like “blimey,” “quicker than you can say Bob’s your uncle,” and “I’ll knock your block off.” And they kidnap all of the puppies. After that,  we see them call Cruella to let her know that the job is done. When Thr parents and adult dogs get home, George calls Scotland Yard and Pongo calls the All Dog Alert – also referred to here as the Scotland Bark. That means he barks out the window about his kissing pups and all dogs who hear his bark pass the message along.

Now this is the forty minute mark. That means the movie still has half of its run time remaining and that the next forty minutes will be all about the puppies escaping and nothing else. Are you starting to see why the second half drags? In the first half we got to see the couple meet, the couple get married, the dogs have babies, Cruella demand the puppies, and Cruella kidnap the puppies. All of that compared to the second half and literally same amount of screen time, which is devoted just to the escape. And it’s not that the second half is so bad or anything (we get to spend more time with Horace and Jasper, who are fun,) but it’s just not in the same ballpark of story and excitement as the first.