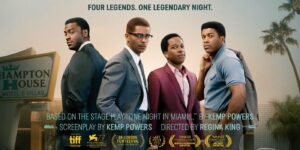 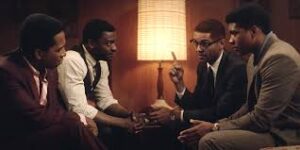 A very original and creative movie, this one tells the story of four icons of history and their night spent together as they work through all sorts of tension and conflict.

This is a pretty remarkable movie that depicts a single night, in and around a single motel room, with four friends meeting up and working through loads of conflict. The characters are all historical icons, including Malcolm X, Mohammed Ali, Jim Brown, and Sam Cooke. And each one of them is at a crossroads in both his career and his life. On top of that, each character has secrets that he is not telling the others, and during the course of the movie, each of those secrets comes out. This movie has limitations, just like the great film, Locke, including both its locations and its small group of characters. And it uses those limitations to its advantage, having a characters engage in deep conversations and confront each other whenever possible. One of the four characters doesn’t quite get the same treatment as the others, but in all other areas this is a pretty fantastic film.

One Night in Miami is a movie that is rich with dialogue and conflict. It is a movie that was made from a play. And that’s pretty obvious considering the limited locations and characters. But boy is this movie go far with character development, and powerful story-telling. Like Locke, the movie where Tom Hardy spent an entire movie having speaker phone conversations while driving a car, the more limited you are, the smarter you have to be. Now, that isn’t a hard, fast rule (the Ryan Reynolds movie, Buried, for example, was nothing special, despite it limiting the character to the inside of a coffin for the whole movie. But let’s put it this way… the few movies that can pull it off, and be both limited in scope and yet interesting, aren’t just good, they are great. They  end up being incredibly smart and well-written. One Night in Miami is certainly one of those examples.

The movie is about four characters who spend nearly the entire duration of the film in and around a motel room. They have conversations in the parking lot, in the room, and even up on the roof of the building. And they work through a whole lot of  whole lot of conflict. The movie tells the story of four historical icons… Malcolm X, Mohammed Ali, Jim Brown, and Sam Cooke…all at a pivotal place in their careers and lives. Each character has secrets and each character has internal conflicts that he is not confiding in the others. And during the course of the movie, all of this comes out.

One of the most clever things about the movie is that we know most of the secrets even when the characters don’t. For example, we know that Malcolm X is planning to leave the Nation of Islam (the religion and organization where he is a leader, right under Elijah Mohammed,) from the very first time we meet him. Our first time seeing Malcolm is while he is having a conversation with his wife. And they discuss him leaving, and how much it will impact their lives. Only when he gets to his night of celebration with his three friends, he doesn’t tell any of them this. In fact, he can’t, because Cassius Clay (who will become Mohammed Ali,) is about to join the Nation. And he’s about to join it because of Malcolm.

The two of them are great friends. And Malcolm X has lead Clay to the brotherhood and shown him the way. And now, on the eve before Clay is about to announce to the world that he is becoming a Muslim, and even changing his name, his mentor Malcolm has decided to leave. Talk about bad timing. The issues between these two men are by far the biggest issues in the movie. After all, these conflicts aren’t just about themselves, but in many ways also about each other. For Clay, in particular, finding out that his mentor is leaving, right as he is joining, will most certainly make him feel betrayed.

In the case of the other characters, the conflict isn’t quite as juicy. Jim Brown actually gets the weakest story of the four of them. His situation is that he is thinking about leaving football. He’s the greatest player in the NFL, but he doesn’t feel like he is being treated the right way. We don’t really see enough of this, and a flashback, (like the one we get for Sam Cooke, seeing him on stage solving a problem,) would have gone a long way. But we do meet Brown as he has a glass of lemonade with a white man on the man’s porch. This is a guy who Brown considers practically like family, based on their family’s history with each other. On top of that, the man showers Brown with compliments about how great of a player he is. It all seems to be going great, until Brown asks to go inside the house, and is met with a racial slur. It isn’t meant to be out of anger, but is certainly demeaning and shows Brown that he will never be considered an equal to certain people. And this is the sort of thing that motivates his character, as we seem him partake in numerous conversations later on, about the divide between white people and black people.

In fact, much of the movie is about that divide. There are nearly no white characters in the movie, (really just that man at the beginning, who met with Jim Brown and was played by Beau Bridges. Just him and his daughter.) Even still, issues of white people verse black people constantly come up. Specifically the way that black people are treated and seen as inferior. In fact, Malcolm X’s big problem with Sam Cooke is that he believes Cooke isn’t doing enough for black people. He believes that Cooke should be writing songs about the black struggle and the black experience instead of just whiting songs for white people, about white people and love. In a fantastic sequence, Malcolm plays record of two of Cooke’s songs for the guys, laughing at how ridiculous they are. Then he plays a Bob Dyllan record of the musician singing, “Candle in the Wind,” and talks about how beautiful the lyrics are, and how Cooke should be writing songs like that.

From very early on, we can tell that this is going to be an interesting film. The movie opens with each of our character in their own world, performing or doing what it is that makes them great. Clay fights in a boxing match. Cooke performs at the Copa Cabana Night Club. Brown has that meeting with the white man on the porch, and Malcolm sits and talks with his wife about what they are about to do, leaving the Nation. But the real interesting part happens when these four characters get together in the hotel room and learn what Malcolm X has in store for them… a night of reflection. These are some of the biggest stars in entertainment, each from a different sport of industry, and their whole lives are probably filled with going to the greatest parties around. And here, on the night when Clay has just won the biggest victory of his career, and has finally gotten the world’s attention, Malcolm’s plan for celebration is to have them all just sit in a motel room, talk, and reflect. No drinking, no girls, just the four of them. It sounds pretty boring and dull, and the fact that he is able to convince the four of them to go along is pretty remarkable.

The characters discuss their careers off and on, and their accomplishments. And at one point, Malcolm (who is clearly the star of the film, if there is one,) looks out the window quite a bit. He sees two men in the parking lot, standing outside of their car, and he believes these men are following him. He thinks maybe they were sent by Elijah Mohammed, who has been tipped off that Malcolm is planning to leave, and is now having him followed at all times. We already know that there are two security guards standing outside of the motel room at all times, not hired by Malcolm, but hired by the Nation of Islam to “protect,” or keep tabs on him. Feeling the paranoia of being watched, Malcolm tells the guys that they have to get out of there, and he takes the party up to the roof. There he is able to look down, over the edge, at the parking lot and two guys who are watching him. This whole sequence feels a little like the helicopter sequence in Goodfellas, as Henry Hill drives around during the course of a single day, high as a kite on cocaine, and paranoid that a helicopter in the sky is following him and watching him. That’s a pretty good movie, and an amazing sequence to draw inspiration from.

And this is all in the first half of the film. In the second half, new ideas and conflicts come out. Characters pair up and start having conversations with each other one on one, instead of all four together at all times. Sam Cooke storms out of the room and Clay goes after him. That leaves Malcolm and Brown, and they have some pretty compelling discussions of their own. Like the one about the different shades of skin color on black people. They discuss light-skinned black people versus dark–skinner black people in a conversation we don’t often get in movies, (the last one I can remember was in the Spike Lee movie Jungle Fever, a number of decades ago. Here, the conversation comes up with Brown asking Malcolm if it’s because of his light skin that Malcolm feels like he owes something to black people. Like he has to sort of prove something to them. It’s an incredibly interesting conversation, although just one of many in this movie.

One Night in Miami is pretty remarkable. It does a lot of so little. It also really captures these characters at the perfect time, when they were all transitioning and at a cross roads in both their careers and their lives. The movie excels with dialogue, but also with character development and atmosphere. Movies that take place all in one night are often pretty cool. Movies that take place all in one night in a hotel or motel take it to the next level. There aren’t many that fit that bill, (Identity, the John Cusack, James Mangold-directed mystery comes to mind,) probably because keeping the movie interesting the whole way through, with such limitations seems too challenging. But One Night In Miami does it, and pulls it off. The walking around the hotel, in hallways, the parking lot, and the roof, help give the viewer a real sense of the layout. And then the use of music that is so strong it is worthy of conversations, also goes a long way. There are the Sam Cooke songs and the Bob Dyllan song, but there’s also the flashback where we see Cooke spontaneously perform the song “Chain Gang.” It just one more fantastic moment in an already very smart movie. The only flaw here is that a little more time could have been devoted to Jim Brown’s story and conflict. For the other three characters, however, this movie handles their storylines with both excellence and precision.