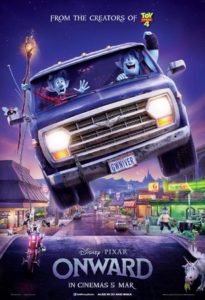 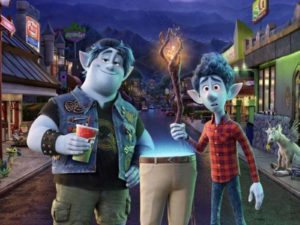 Part Lord of the Rings, part Raiders of the Lost Ark, two teenagers go on a quest through a world of fairy tale creatures, and the journey turns out to be a whole lot of fun.

Wow, is this a great movie. It’s one of those movies where the more you watch it, the more you pick up on everything. And one can probably say that about most movies, but this one really has levels. It has an ending that just knocks it out of the park with being unlike anything you could or would ever predict. But it also has an amazing quest stories about these two brothers out on a mission. And then there’s the backdrop to this whole thing, a fantasy world that once was, where now the creatures of fantasy stories (centaurs, fairies, and more,) still roam, but they now resemble people in our world, and have traded magic for simplicity. The opening montage depicts all this, and it is hilarious. The movie is loads with adventure and humor, and other than it’s lousy and forgettable title, this film is pretty fantastic.

Onward is a great movie with a terrible title. The problem with the title is that it’s incredibly forgettable. It’s the kind of title that a year from now, people who are thinking about this movie will be saying, “what was that movie called?” All it had to do was make up some crazy name for the world and call the movie that, and it would be done. But Onward? What does that even mean? That they are moving forward? The good thing, however, is that this is really the only negative thing about the entire movie. It’s an excellent film with a super powerful ending that really packs a punch. This is a quest movie filled with adventure and excitement. It’s also filled with some really smart plot twists and humor.

The movie is about 16 year old elf teenager named Ian, (voiced by Tom Holland,) who is incredibly awkward. He doesn’t know how to talk to anyone, other than his family members, and makes a fool out of himself whenever he tries. Those family members are only his mother and older brother, Barley (voiced by Chris Pratt.) Barley is a chubby nerd who knows everything about the history of magic and spells and the world of fairy tales that once was. He’s a dungeons and dragons type of guy and even has a game just like that, called Quest of Yore, that he believes is based on reality.

We learn at the start of the movie that magic did once exist in this world, and included unicorns and fairies flying around, wizards casting spells, centaurs running through the fields, and mermaids swimming in the rivers. But over time, creatures realized that life is just a whole lot easier without having to rely on magic for everything. The montage that shows us this, with a Cyclops trying to use magic to create light, and then eventually seeing a light switch that can just be flicked off and on, is fantastic.

We see lots of other examples, including fairies giving up flying and grounding themselves when they see a plane, mermaids giving up swimming in rivers and just relaxing in a single-person backyard blow up pool, and trolls who once struggled to create fire with sticks, now just sitting beside an electric, turn a switch on, fire place. Basically, the world of fantasy and magic has now become very much like ours. The creatures are still fantastical, but they do everyday things and work everyday jobs. The centaur, for example, is a cop who drives a car, (how exactly he fits in the car is anyone’s guess – maybe he has had the back seats removed,.)

If this sounds a little bit like Zootopia, as far as the world, that’s because it is. In basic premise starting point only, that movie was about animals who act like humans and have a world similar to ours, and this one is about fantasy characters who have that situation too. But when you think about it, lots of Pixar movies are like this. Monster’s Inc is another quick example. It’s not the world that is so interesting, it’s the story. And the story here, about how magic once existed, but now has pretty much been forgotten is unique to this movie and this story, and it works out really, really well.

The story starts after that opening montage about the world once was and what it has become. Now we meet Ian, as he throws on his Dad’s old sweatshirt and wakes up the morning of his sixteenth birthday. He runs downstairs where is mom (voiced by Julia Louis Dreyfuss,) is doing a hop step back and forth set to a workout video where she says, “I am a mighty warrior,” (all of this will come into play later on in the movie.) This is where we learn about the sweater, about the dad, who passed away before Ian was born, and about Ian’s birthday. His mom wants him to invite some friends over, but Ian doesn’t feel so good about that. We also meet Barley, who demands that no one touch the pieces on his game.

When a Centaur police officer shows up, who is also the mom’s boyfriend, we learn that Barley is in trouble with the law for trying to protect old relics in the town of the days of magic, from being torn down. And then the boys are off to school, where Ian strikes out with a group of friends, in large part because of Barley’s interference. When they get home, their mom presents both with a gift from their dad… a wizard’s magic staff. Only Ian can make it work, which is funny because it is Barley who has studied this and knows all the spells like the back of his hand. But when Ian gets it working, they come pretty close to bringing their dad back to life for one full day, from sunrise to sunset. Only they don’t. They only bring the bottom half of him back, which is basically a set of legs and feet. Now this is funny and ridiculous stuff. The “dad,” of the movie consists really of these legs, and yet he becomes a character in the film. When Ian crafts a top half for him that makes him look like a scarecrow, there are definitely some Weekend At Bernie’s vibes, and it’s all pretty hilarious.

At this point, Ian and Barley set out on an adventure. They know that to get the rest of the spell to work, they need to find a special gem, and that they have a very limited amount of time to find it. Once the sun sets, their day with their dad is over. And so they embark on the quest, taking Barley’s van, Guinevere, which has a unicorn painted on the side. And their first stop… the Manticore’s Tavern. This is a pretty cool place to begin, and the movie continues to defy expectations and surprise us when this place that looks like it might be an old dusty haunted house on a hill turns out to be a family friendly restaurant. But not to worry, there’s mystery and adventure hidden inside, it includes a very funny character who also has forgotten or moved on from her past. The Manticore, voiced by Octavia Spencer, is a fantastic character. And it’s great that the movie doesn’t just use her in this one sequence, but finds a way to make her character relevant to the plot of the rest of the movie.

At the tavern, the boys aquire a map. That map, which is really a kids menu with a puzzle that has been completed by a child, leads them to a place called Raven’s Claw. But to get there, they will have to overcome a ton of challenges. These include Barley shrinking due to a spell gone wrong, a biker gang of tough guy fairies called the Pixie Dusters, and an invisible bridge that can only be crossed if one both poasses magic and also truly believes. If your starting to get Indiana Jones vibes here, with this bridge, it’s only the beginning. After a showdown with the police, where Guinever the unicorn van actually gets to take flight, the boys find themselves in a tunnel filled with traps, and we get all kinds of adventure fun.

From time to time, this movie has a minor misstep. For example, the turning a cheese puff into a boat seems a little too silly, (why not use a fallen boulder, and have the magic be just making the boulder move, instead of the cheese puff?) But most of it really works. And the realization moments at the end are absolutely fantastic. Without giving anything away, this one definitely does not end the way anyone might expect, in terms of Ian’s story. And there’s a really great climax with Ian putting use to both his invisible bridge walking skills and all of the magic he has learned so far. This movie is exciting, funny, and a whole lot of great, smart fun.