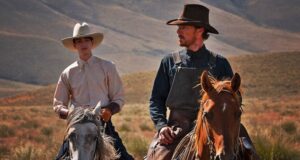 This year the Oscar movie contenders happen to be some very interesting and unusual films. And that’s a good thing. Because unlike certain past Best Picture winners, like The Shape of Water, which had no business even being in the competition, this years movies that have been nominated seem pretty well-deserved.

The Power of the Dog

Having seen most of these movies, I can safely say that they are pretty good choices. For one thing, it’s interesting that movies like Nightmare Alley and Don’t Look Up got in here, when they really haven’t been recognized much in other categories. Those are the more mainstream movies to be in the race, and in the case of Don’t Look Up, some of the better movies. That film was absolutely terrific. By far the best movie on this list. Meryl Streep and Jonah Hill should both be nominated for acting Oscars, except that the academy doesn’t like to recognize actors in comedies. So instead we have Jesse Plemmens being nominated for The Power of the Dog because apparently everyone associated with that movie has to be nominated (and I loved the movie, but being nominated in all four acting categories is a little much.)

Getting back to the Best Picture race, I love that there were ten nominations, I love that Don’t Look Up and King Richard and West Side Story and The Power of the Dog were nominated. What I don’t love is that Spider Man No Way Home was left off the list. Is it really so hard to nominate a superhero movie? Is it really like pulling teeth for the Academy? Let’s consider that the reason 5 movies got bumped up to 10 back in 2009 was because of The Dark Knight. That movie didn’t make the five best picture nominations, everyone felt it should have and so they bumped the number up to 10 so that this would never happen again.

Well, now over ten years later, only one superhero movie has been nominated for best picture since the change… Black Panther. And that was more of a cultural statement than anything else. A good movie, for sure, but definitely lacking in some major areas too (like computer effects.) You know what movie’s not lacking? Spider Man No Way Home. You know what movie saved the box office and brought people back to theaters during the worst pandemic in the history of movies? Spider Man No Way Home. Not to mention setting box office records as one of the highest grossing movies of all time, and dodo coming out at the exact perfect time of year to be nominated. December. Oh and one more thing..  the Oscars are coming off it’s lowest watched year ever. Would it kill them to throw in a popular movie router in nostalgia?

Getting back to the other nominations, I hope The Power of the Dog takes this one. It is a hauntingly beautiful movie, and if Don’t Look Up had a chance, I’d be all in on that one, but for that movie the nomination is the accomplishment. With The Power of the Dog, we have a real contender of an extremely dark movie with disturbed characters, and a story that slowly and carefully builds to a wild conclusion. This is the movie where everyone was nominated for an acting Oscar. All four categories. That has only happened twice since the early 80s (Reds, in 1981.) The only two times it had happened in the past forty years was with Silver Linings Playbook and American Hustle (both movies by director David O Russell.) So what The Power of the Dog has going on is quite an accomplishment, and it will hopefully win.

In other categories, Will Smith should win for King Richard. It’s between him and Cumberbatch for Power of the Dog, but it’s gotta be Smith. He carries the movie with his performance, and it’s a really good movie. Just the idea of making a movie about Venus and Serena Williams and focussing the movie around the Dad is an incredible concept. And Smith knocks it out of the park. This is his year. It’s his time. And this is by far and away the best performance he’s ever given. He needs to win for this one.

The other Oscar races are a little tougher to predict. For Best Supporting actress all arrows point to Ariana Dubose from West Side Story. And of all of the actors in that movie, she’s definitely the one who comes away as the most memorable. With actress, Nicole Kidman seems like the safest bet, for playing Lucille Ball in Being the Ricardos. It’s an iconic character and she captures Lucy well. Plus it’s one of those movies that takes an inside look at the industry and its history,  the Oscars love those (just think about The Artist.)

So that leaves best supporting actor, director, and then the writing awards. For supporting actor, my money is on Kodi Smit-Mcphee. He’s a fairly newcomer going up against heavy weights like Cumberbatch in this movie, and he’s pretty good. Plus it’s doubtful that Cumberbatch wins over Smith, and someone should win an acting Oscar for this movie. Smith gives the second best performance in the film, and while his character is absent from the whole mid-section of the movie (hence why it is supporting actor,) he definitely is a major part of the final act, which is where the movie gets most powerful.

So now for director and writing. Director is a tough one. There’s Jane Campion for Power of the Dog, Spielberg for West Side Story, and Kenneth Branagh for Belfast. While Belfast is definitely the most personal movie (it’s about Brannagh’s childhood,) it’s also not all that great of a film. What Spielberg does with West Side Story, on the other hand, is a tremendous accomplishment. I like him the best for this one, although there’s a good chance Campion takes it.

And then for writing. For adapted screenplay it’s either Dune or Power of the Dog. Dune might win because it will be one of this movies only awards, but considering how slow and dull the movie was, I think The Power of the Dog is more deserving. For Original Screenplay Licorice Pizza will most likely take this. Is it deserving? Not really. The movie is just okay. And what would blow my mind is if the movie that actually deserves it, Don’t Look Up, wins. But Licorice Pizza is the movie everyone loves and keeps talking about, and it’s another one of those inside the industry movies (kind of,) with iconic real life Hollywood personalities being played by Sean Penn and Bradley Cooper (in very small roles.) If that movie wins for anything, it will probably be this.

So there you have it. My ideas on who should win, and who will win. Now we’ll just have to wait for the big night, on March 27th,  and see what happens.