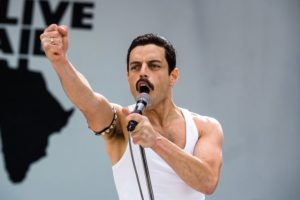 As we get closer and closer to Oscar night, (now just a week away,) it’s time to examine the movies that are nominated, the ones that didn’t get nominated, and to try to make some sense out of this whole thing. First off, this is going to be a strange year at the Oscar. It’s the first year in a number of decades where there has been no host. How that’s going to work out, exactly, I have no idea. Will it just be a bunch of presenters coming on and going off stage? Will there be little skits and vignettes? And who will be making all the jokes?

But now let’s talk about the movies. The films that achieved nominations, and those that didn’t. It’s an interesting road complete with some patterns and some very good movies getting their due.

For best picture, we are looking at eight films.

Green Book, Roma, A Star is Born, Bohemian Rhapsody, The Favourite, Black Panther, Black Klansman, and Vice. They are not all great movies, to be certain.

Black Klansman and Vice, in particular, are not very good. Sure, they have their merits. Especially Black Klansman, which is a fine film, but deserving of a best picture nomination, it is not. And Vice is just another Adam McKay, political commentary dull film, (like his last movie, The Big Short, which was also nominated for many Oscars.) Luckily, neither of those films has much of a chance of winning. Neither does Black Panther, which would have been the first superhero movie to win, ever.

So let’s talk about Black Panther and Black Klansman for a minute. Clearly these two movies are taking the Get Out spot from last year, which is to say an African American centered movie from much earlier in the year than all of the other Oscar nominated films. Now, I’m very happy that Black Panther is nominated for Best Picture, and Get Out was my absolute favorite movie from last year, and deserved to win. But what I don’t like is that the only movies which seem to get nominated from way earlier in the year, are these movies. What about the countless other films throughout the year that were also excellent? And I also don’t like Black Klansman being nominated at all.

Speaking of that, in the best supporting actor category, Adam Driver does not belong. He’s nominated for Black Klansman, and it’s pretty ridiculous. Similarly, I’m not sure why Sam Rockwell is nominated for playing G W Bush in. Vice. Rockwell is a great actor, and deserved to win last year, for Three Billboards Outside Ebbing, Missouri, but Vice is nothing special, and his performance is barely in the film. Instead we should be seeing either Timothy Chalamet or Steve Carrell nominated for Beautiful Boy. No such luck.

Much as I don’t like Vice, Christian Bale in that movie, is pretty awesome. This guy is a chameleon, and he absolutely brings the character of Dick Cheney to life. The only problem is that he’s up against Rami Malek, playing Freddy Mercury of Queen, who is even better. While Bale embodies the part, Malick makes us care about and feel for him. Malek gets us into the movie with his emotional and powerful performance. He deserves to win, and most likely will.

A Star is Born

Aside from Malek and Bale, Mortensen is pretty great too in Green Book, and Cooper might not be the best actor here (although his Sam Eliot-like voice in A Star is Born is pretty awesome.) The only thing Cooper has going for him is that he was snubbed for a best director Oscar, the same way that Ben Affleck was snubbed for that with Argo. But that lead to Argo winning best picture, not actor.

Speaking of best picture… it will either be Roma, A Star is Born, or Green Book. And it’s very doubtful that it will be Green Book. The artistic favorite between those three is Roma, although it is by far the worst of the three movies. A Star is Born is the classic movie that has a wide audience and has been the front runner for sometime now. But in the past month or so the tides have turned and now it seems like Roma might be first in line. Consider it like La La Land vs Moonlight from 2006. La La Land was the favorite, a la A Star Is Born, but Moonlight snuck up under the radar and won, (like Roma just might.)

Yalitza Aparicio, “Roma”
Glenn Close, “The Wife”
Olivia Colman, “The Favourite”
Lady Gaga, “A Star Is Born”
Melissa McCarthy, “Can You Ever Forgive Me?”

it’s either Glenn Close, Olivia Colman, or Lady Gaga. Close is the favorite simply because of her age and the fact that she’s never won before. But nobody saw her movie or knows anything about it, and that should really count for something. Colman is fantastic in The Favourite, and it would be pretty awesome if she won, but the thing about that is, it’s strange to think she is considered the best actress, and the other women in the cast are both nominated for supporting actress. Emma Stone is clearly the star of that film, and Colman is actually the third of the bunch. And Gaga is pretty awesome in her movie, but considering that it’s her first time acting in a movie, the nomination should be good enough, (although they did give it to Jennifer Hudson for Dreamgirls, despite that being her first film too.)

And now it’s onto the supporting actor / actress categories. For supporting actor, there’s only one great performance here and it belongs to Mahershala Ali. Yes, he won just two years ago for Moonlight, (a role he didn’t deserve to win for,) but with this movie, he actually does. The only one who is even good here is Sam Elliott in A Star is Born, playing Bradley Cooper’s brother, but the nomination is enough. It’s Ali who really embodies his character and nearly steals the show.

For supporting actress, they say it’s Regina King for If Beale Street Could Talk, but for this one, I really have no idea. Amy Adams was okay in Vice, but nothing special. The Favourite was a great movie, but. Coleman was really the one giving the best acting performance, and for some reason they nominated her for the wrong category It’s a bit of a mess.

Now for director. They say it’s got to be Alfonso Cuaron for Roma. The movie isn’t great, but the directing most certainly is. He brings an artistic integrity to a movie that exists in a time where movie goers generally don’t have the patience for symbolism. But with Roma, Cuarron makes us care. He makes us look at this movie in a way that gets us to dissect it. And, while the plot is thin, there is still a lot going on behind the scenes. The movie looks beautiful,and moves at a pretty good pace. It’s just that not enough happens. This film is a little too anticlimactic, and not nearly exciting enough.

Prediction: Spider Man Into the Spiderverse

Finally, for animated feature, it’s Spider Man: Into the Spiderverse. That’s the favorite, and it’s well-deserved. Consider that they had to invent a new kind of animation to bring the Vision to life. And it works. Now the only thing left to do is wait. One week and then we will see who the big winners are.