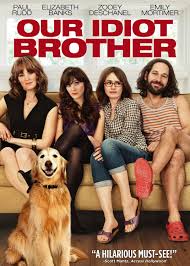 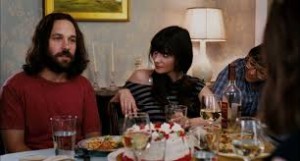 A fun movie about a very likable, yet goofy guy and the three sisters whose lives he ends up getting involved with.

Our Idiot Brother is an interesting comedy that is built around a sort of road trip formula where the character goes from place to place and spends time with different people. only it doesn’t really feel that way. that’s because, unlike Four Christmas’, or any other road trip movie, in this one the character really goes back and forth. nothing is laid out simply, like first he goes here, then there, and then there. instead, the character spends a few days somewhere, then a few days somewhere else, and then often returns to the first place.

All of this is important because it makes the story come out in the foreground instead of the background. and the story is about how this brother, Ned, ends up affecting his sibling’s lives. Ned has three sisters (all attractive, of course), and each of them has a problem going on in their lives. of course Ned comes along and makes each of these problems a whole lot worse.

the movie starts with Ned selling pot to a uniformed Police officer. it’s a kind of funny scene, but also a bit of a downer because the officer really does appeal to Ned’s nice side. the guy tells him that he’s been having a hard week and really needs something to help him go on. Ned is in no hurry to sell to this guy and even tells him that he’s not going to sell to an officer, but then he decides to help a guy out. and Ned doesn’t even want to charge him. of course Ned ends up getting arrested and locked away in jail, but the scene really shows us just what a nice guy Ned is, even if it means being a little stupid too.

when Ned is released from prison, his first stop is to go back to the farm where he was living with his girlfriend and dog. only his girlfriend, Janet, has moved on to another guy and to make matters worse, she won’t even give up the dog. she refuses to let Ned stay there and sends him off on his way, to his mother’s house. that’s where we meet the three sisters and here one of them, Liz (Emily Mortimer) tell Ned that her door is always open.

Soon Ned is taking her up on that offer and coming to stay with Liz and her husband, Dylan (Steve Coogan), who is a real jerk. Dylan looks down on Ned and thinks of the guy as a total screw-up, and yet Liz convinces her husband to take Ned along to work with him on a documentary film set. Dylan has pretty much given up on his wife, and Ned ends up finding out the reason why, although he has no idea how to put the pieces together, which is kind of funny.

Ned then goes back and forth with staying with the other sisters as well. there’s Miranda (Elizabeth Banks), as the independent, successful, businesswoman willing to sell her soul for a story. she’s a journalist and having a hard time getting people to open up to her. of course charming Ned comes along and gets these same people to open up right away. and the conflict comes when Miranda needs to know the things he was told in order to include them in her story.

another conflict with her involves the guy she is kind of seeing, Jeremy (Adam Scott). Jeremy tells Ned what he really thinks of Miranda and Miranda tells Ned the problems that she has with Jeremy. and of course Ned goes and tells everybody everything. he’s got no lid on his mouth and just spills the beans, often not really on purpose. he always does it in this dumb, nice guy kind of way as if he doesn’t realize what he’s saying.

The final sibling is Natalie, played by Zooey Deschanel. she’s the youngest and most free spirited. Natalie lives with about four other people in a tiny Brooklyn apartment. the place is so small that when Ned comes to stay with them he has to sleep in a raft in the garage. and Natalie has a secret of her own that she tells Ned. Natalie is dating Cindy, played by Rashida Jones. and her secret is one that Cindy doesn’t know. the sparks go flying from there.

my idiot brother works on a lot of levels. first of all, it’s a comedy, and it’s often kind of funny. there are no great laugh out loud moments here, and nothing hysterical, but still the situations are often kind of humorous. I love, for example, how easily Ned buys the excuse a character gives him for why he is naked. but aside from comedy, the story here is pretty great. it’s very involving, and we get involved in each characters lives. with so many different story lines and a new conflict for each one, there is a lot of excitement going on here. each sister has her own major problem and Ned gets involved in all of them.

and aside from the comedy, and the plot, the casting here is pretty great as well. Paul Rudd is perfect as the lead, and he handles the character just right, but there is so much more talent on the screen than just him. I mean there is three people from the TV show parks and recreation in this cast alone (Adam Scott, Rashida Jones, and the girl who plays Janet). not only does a talented actress play every sister, but every sister’s romantic partner is too. and that casting really goes a long way. for example, Steve Cogan’s character, Dylan, wouldn’t be half as much fun to watch if a different actor played him. this movie has a lot going for it. things might get tied up a little too neatly at the end, but it’s still a whole lot of fun getting to that Point.