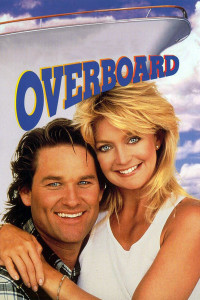 An okay movie with an intriguing premise that just becomes a little too predictable and routine as it goes on.

The storyline here is pretty entertaining, at least with its original concept. This is a movie about a man who finds a girl with amnesia and then convinces her that she is his wife. Talk about taking advantage of someone’s physical condition. The only reason it works here, as a light-hearted comedy is because the woman owes him money that she has no plans of paying and the man intends to use this situation to get her to work for him until he makes the money back. The beginning and ending of the movie are a lot of fun, and the middle is where that creative premise comes out. The only problem is that other than that premise, the movie doesn’t have a whole lot of ideas. It definitely drags on during the mid-sedtions of the film. And the movie is also way too predictable towards its end. Still, it is also a good deal of fun.

The overall idea behind Overboard is by far and away the craziest thing about the movie. A man convinces a woman who has amnesia that she is his wife, and brings her home to live with his family. This premise is so politically incorrect that it would never fly in a movie today. Sure, it’s all in good fun and doesn’t cross any direct boundary lines, (for example, he never takes her to bed, with her thinking she is his wife,) but even still, this is borderline kidnapping. And it certainly taking advantage of someones mental state. But instead of thinking about how ridiculous it was that the movie was able to get away with all this under the guise of a romance, an even better way to think of it is how funny it all is. How in the world did they ever pass this movie off and what does that say about the society that was okay with it?

For what it’s worth, this is a pretty out there and original premise, and that kind of thing generally goes a long way. This movie was made at a time when light hearted comedies were indeed trying to find creative and unique ground. Movies like All Of Me with Steve Martin playing a man with a woman traped in his body, or Raising Arrizona, where our heroes were kidnappers who stole a baby from his crib. And in an age where being different was everything, the movie Overboard ended up being a little too familiar after all. Sure the premise was great, but the more the movie went on, the more predictable it became.

At the start of the movie we meet Joanna, (Goldie Hawn,) a wealthy businessman’s wife, who owns a yacht with her husband and sails it wherever they please. Joanna, in particular, treats the help horribly, and this includes a butler on their yacht who brings her food to sample and see if it’s to her liking. Goldie Hawn is playing such a stuck up character here, in these opening scenes, that she borders on acting like an evil cartoon character. And yet, it’s fun. Especially when Dean Proffitt (Kurt Russell,) comes into the picture and cannot believe that she’s for real. He represents the audience, just laughing at how over the top Joanna is.

Proffitt is a carpenter hired by Joanna to redesign her closets. Specifically she wants a place to put all of her shoes. Proffitt designs a really cool cubby hole armoir where you turn a crank and all of the compartment fall back while other compartment move forward, revealing all new shoes. Only Joanna doesn’t like it. She doesn’t like the kind of wood Proffitt has made it out of, and demands that he redo the entire thing. On top of that, while he has been working hard on this for the past two days, Joanna has spent the time making insults about Proffitt to the other people on the yacht, and he’s heard every one of them. She ends up throwing him overboard, into the water, and then throwing his tools over, after him.

But then something happens. Joanna goes up to the deck that night, looking for her wedding ring, and she falls overboard herself. The next morning her husband wakes up and sees a news story on TV showing Joanna in a hospital with amnesia. Apparently her memory is gone, but her attitude is still exactly the same, and she’s driving all of the hospital employees crazy with her insults and demands. The two characters who learn about this and decide to show up are Joanna’s husband and Proffitt.

Her husband arrives first. He watches Joanna through the glass door, standing there, pondering his options. He watches as she continues to drive people crazy and realizes that this is his chance to get out. And so when the husband comes in, he pretends to have never seen her before. And then Proffitt shows up and claims that Joanna is his wife. If the reason for this was because he liked her, then the movie would have a problem, because then he really would be taking advantage of her for sex. But instead, it’s about money. Joanna owes Proffitt six hundred dollars for the work he did on her armoir, and he intends to get it back. That means making her work for him, whether she knows it or not.

Proffitt brings Joanna home and introduces her to “their” kids. The kids are in on this whole thing and play along, calling Joanna mom and acting like they are concerned about where she has been. The house is a mess, and is as disgusting as can be. Proffitt apparently isn’t very much of a father, or at least not that good at it, letting his kids run wild all over the place and not really disciplining them at all. When the principal comes over, in an earlier scene, to meet the family, the kids basically drive her screaming out of the house.

The mid-section of the movie is where Joanna starts to change. Little by little she goes from a miserable, cranky, and nagging person to a woman who cares for these kids and can learn to relax. She has doubts about the different things that Proffitt tells her she always does for them, but goes along with them anyway. And soon the house is getting all cleaned up and Joanna is helping her husband start a mini-gold business, based on ideas she has for what each of the holes can be.

You can tell that this movie was definitely based around a simple logline, with lots of space that needed to be filled in. Much of what happens in the mid-sections feel kind of tedious. That includes a pair of panties that Joanna finds in Proffitt’s car, to accuse him of cheating on her. The funny thing is that the panties are actually hers, with her real initials on them. Only he has given her a different name, with different initials. At one point Joanna even goes into school, on behalf of her kids, to speak to the principal about how they are doing.

The ending is pretty much exactly what you would expect. Of course the secret is going to be found out and the jig will be up. Any movie where the premise or relationship is based on a lie ends with the character who was lied to finding out. These movies always end with the big fight, where the characters separate, and then for some reason start missing each other enough to come back to each other. With this movie, I’m not so sure that she really would. This is a man who not only lied to her, but basically kdinapped her, and on top of that, his lifestyle is far less glamorous then the one she is used to. Still, the scenes of her back on the yacht trying to fit in again, with high society, and realizing that she doesn’t belong, are a lot of fun. This movie has a great premise, a solid beginning, and a predictable, yet likeable ending. It’s the mid-sections of the film that fall a little short of the mark.