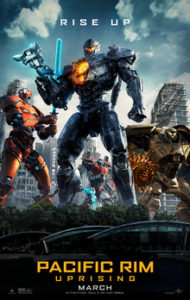 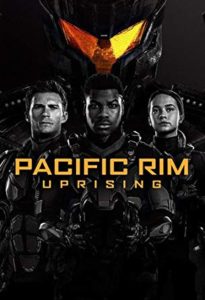 A pretty lousy movie, this one somehow takes everything that was good about the first film and throws it right out the window.

This one is a mess. There’s really no other way to put it. If the original concept was giant lizard monsters attack and so we have to create giant robots to combat them, then this sequel more or less forgets about the giant lizard monsters. How does that even happen? How do you go more than halfway through the movie without showing us a single monster. It’s as if they were trying the approach of some of the older horror movies, where throughout the film you slowly saw more and more of the creature until in the final scenes you saw the whole thing. But those movies (like The Relic or Deep Rising,) weren’t exactly good, and they certainly didn’t have the potential for world building the way the first Pacific Rim movie did.  That first movie was a creature-fest extravaganza, brought to us by the greatest creature movie director around, Guillermo Del Torro. Well, he’s nowhere to be found for the sequel, and it shows. The story here is about robots fighting robots (as if we needed more Transformers-like material,) an alien brain controlling things, and a bunch of teenage cadet pilots in training. Other then one cool twist involving a character’s evil plan, none of it actually works. With the lower budget then the original film got, and a first time movie director replacing the director who was actually a perfect fit, what did you expect?

Pacific Rim: Uprisiing is in every way worse than the first movie. You knew there was going to be a problem when they replaced Guillermo Del Toro as the director, considering that he was the absolute perfect fit for these movies. Del Torro is a master of creature films. He always has been. From his earlier films like Blade 2 and Pan’s Labyrinth to his later movies like the Hellboy films or The Shape of Water, Del Torro does the genre like nobody else. And he is the sole reason why the first Pacific Rim movie was so good. It was all about the creatures. These giant lizard-like monsters that he called Kaiju. And to combat them, the first film had humans invent giant robots called Jagers. The tagline was “to fight monsters, we created monsters,” and that was pretty much the gist of the movie. It was a take on Transformers Vs Godzilla, and in the right artistic and creative hands, it really worked.

But the sequel doesn’t even recognize or attempt to recognize what made that first movie so good. If the coolest thing about the first film was the monsters, than somehow the sequel intentionally tries to ignore that fact. The movie inexplicably spirals into the exact opposite directions, to the point where it doesn’t even feature the monsters in the first hour or so of the film. Certainly the first half. Those creatures are nowhere to be found. Instead, this thing is about giant robots versus giant robots, and there isn’t even a whole lot of that.

The premise here is that the portal between earth and this alien dimension, (which is on the ocean floor of the Pacific Ocean,) was closed in the first movie and hasn’t been opened since. It has been ten years. So for a decade, there hasn’t been a single Kaiju. And yet for some reason the government is still making these giant Jagers and training people to pilot them. Yeah, right. Can you imagine how much money all of that would cost? But they say it’s about our safety, in case the Kaiju ever come back, and so we go with it (because we have no other choice.)

Since the movie isn’t about the monsters, and is barely about the robots, then what exactly is it about? The teenager trainees. Basically, the most boring option they could have possibly picked. This is about watching these unknown actors argue with each other in the military barracks and training facilities. And if you’re wondering why they would choose to go this route, it is all about money. The budget for this film was scaled down significantly from how much money was put into the original. So now you know why Guillermo Del Torro got out.

Now they do give us some scenes of Jagers (robots.) Certainly much more so than they give us the Kaiju (monsters.) Our first big action scene (other than the opening,) has one of the Jagers go rogue and attack the base where the pilots are training. And that’s really the big event of the first half of the film. The pilots take another Jager after this one and end up in Antarctica, trying to get answers about who the pilot of this thing is, and why it attacked.

Before that, we meet Jake Pentecost (John Boyega,) the son of the Commander Pentecost, (Idris Elba,) from the first movie. Elba was an amazing get for that first film, but he’s nowhere to be found here, and instead, Boyega is chosen to take up the reigns. Only he’s not just replacing Elba here, but also the young hotshot of the first movie, played by Charlie Hunam. The fact that they couldn’t get Hunam back for this movie really tells you something, because he’s not exactly starring in a whole lot else, (when it comes to big budget action movies.) But Hunam made the right decision, the same way that Keanu Reeves did when he rejected the role in Speed 2. Sometimes you can just smell a stinker from a mile away, no matter how good the first movie was.

With this one, the problems are more than just a missing director and cast. There’s also Steven S. Denight as the replacement director. Denight did a great job as showrunner of the Netflix show Daredevil, Season 1, but first of all, he was building off the work of Drew Goddard who wrote and outlined everything before leaving, (and we know how talented Goddard is, from movies like Cabin in the Woods,) and secondly, Pacific Rim: Uprising is not something that Denight had a lot of creative freedom with. The script was already written and the movie was all ready for production when Denight came on board. He was trying to get a different, lower-budget-movie greenlit, and instead the studio offered him this one. In other words, he didn’t even go in and interview for it. He was just handed it, as a project that was ready to go. Talk about a movie that was not his at all.

Getting back to the plot, the Jager attacks and is followed, and when they find out who (or what) is piloting it, the answer couldn’t be more unsatisfying. It’s an alien brain. So now it’s a letter of figuring out how that brain got there. Who is behind this whole thing? There’s one cool twist in that regard, involving a character that we never would have suspected, but that’s really just about the only thing decent in this entire movie.

Apparently this movie wasn’t made for U.S. audiences. The first film was, but this sequel could care less. The first movie didn’t do so hot in America. It was overseas, specifically in China, where the movie really achieved success. And that’s the reason why a sequel ever got made. So it shouldn’t come as a surprise that this movie plays for a different audience. But even still, if the hope is to repeat the success of the first film, then the logic would be to do similar things to what the first movie did, right? Apparently not.

The original Pacific Rim movie took its time with ideas. It wanted us to believe in this world, no matter how ridiculous it was. And so it introduced us to concepts like the neural handshake in order to make a pilot to pilot connection. It got us committed to the idea that you had to be compatible with your partner in order to operate the Jager and that not just anyone could do it. Even the idea of how big these things are and what they could use for weapons, (like a ship from a boat yard,) added to the fun of that movie. And this sequel has none of it. None of the fun, none of the creativity. It’s a real shame because John Boyega would have been a fine star to carry on the franchise, and this was certainly a universe that could have used more exploring, (how about instead of then coming to us again, this time we go to them and explore the alien / Kaiju world?) But this sequel wasn’t the movie we might have been hoping for.