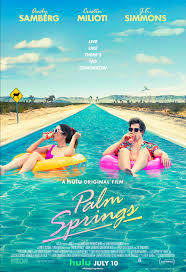 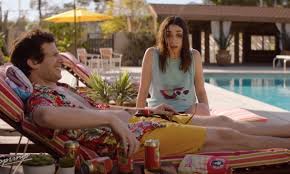 A very clever movie that takes the Groundhog Day premise and finds a new way to make it work for a romantic comedy.

This is a pretty cool movie about the waking up to the same day over and over again, “Groundhog Day,” Scenario. This movie coins it as one of those “infinite time loops you may have heard about,” but let’s be real… it’s the plot of Groundhog Day. And this movie comes up with some pretty clever ways of using it, giving us a romantic comedy where we see the situation through the point of view of two different characters. There have been lots of movies that used the waking up to the same day premise at this point, but it has never been two characters together. Aside from that, this movie is loaded with twists, and not the bad kind that all appear at once at the end. These twists occur right in the middle of the story, which means they expand the story and take it in new, creative directions. This one is pretty smart and a whole lot of fun.

The Groundhog Day premise has been used again and again. And again. It’s the idea that a character wakes up and has to live the same day over again, every day. It was amazing in Groundhog Day itself. It was very good in Edge of Tomorrow, the alien invasion action movie that was the next film to use it. But then the premise started getting used a little too often. From the horror movie Happy Death Day to the Vin Diesel borefest Bloodshot, what was once an original idea became a cliche. And yet, the latest movie on the list, Palm Springs, manages to find some fresh life and creativity using the concept.

Palm Springs is a  Hulu movie starring Andy Samberg as Nyles, a guy who falls into a cave which turns out to be a sort of curse where he must now relive the same day every day. We join Nyles (Andy Samberg,) as he wakes up one morning and attempts to have a quickie with his girlfriend, Misty (Meredeith Hagner, a rising talent who was so great in the TV show Search Party and then the movie The Oath.) It’s a funny start to the film, especially with what ends up happening to Nyles in the scene. And everything that day leads up to an evening wedding where Misty is one of the maids of honor and makes a speech. So does the bride’s sister, Sarah (Cristin Milioti, another rising star who was fantastic in one of the best episodes of Black Mirror.) She is supposed to make one, anyway, only she didn’t realize it and is clearly uncomfortable as she gets up in front of everyone. That’s when Nyles jumps in.

Nyles wings something that he puts together in the moment (or maybe not, considering he is reliving this day,) and it’s pretty non-sensical for a wedding speech. It’s more about life advice than it is about the couple getting married. But it is witty enough to get Sarah’s attention. Plus, he kind of bailed her out. And so Sarah goes and seeks Nyles out. He likes her and wants to spend some time with her. When she asks if his girlfriend will be mad, he shows her what his girlfriend is up to. Let’s just say it’s the first twist of the movie. Many more to come. In fact, every main character has a twist. Nyles has a twist about what he has done in the past with Sarah, reliving the same day again and again. Sarah has a twist about what she did the night before the repetitive day began. Hers is especially big for a number of reasons, one of which being where she now wakes up every single morning.

But before we get to all of those, we are out in the desert with Nyles and Sarah, as they are preparing to get in on, under the night sky. And that’s when an archer named Roy shows up in camouflage (played by the great JK Simmons,) and shoots Nyles with a bow and arrow. Nyles runs aways with Sarah following the whole thing, wondering what in the world is going on. When Nyles makes it to a cave, Sarah comes in behind him. Nyles warns her to not follow him any further, but she does. And that’s what pulls her into this infinite time portal.

Now we start following Sarah’s story and see her reliving the same day again and again. So in a sense we actually get two days that we get to see relived in this movie… Nyles’ day and Sarah’s day. Obviously there’s plenty of intersecting between them. In fact, we get to see how Sarah’s day goes into Nyle’s day, where we saw her enter it before, only from Nyle’s point of view. Earlier on, when we saw Nyless’ day being replayed for the first time, we saw him on a float in a pool, lounging around, when Sarah shows up and angrily comes after him. Well, now we get to see the scene from her point of view, and that includes seeing what she was doing right before this, and how events that morning for her led up to what we have already seen. It’s a smart way to show us the story.

Nyles explains everything. Not that he really knows how this all happened or what it means. He just knows he went into the cave and Roy went in too, and now both of them are stuck in this infinite time loop. Roy blames Nyles for this about once a week or so he comes after Nyles and tries to torture him. And now Sarah is stuck in it too. At this point, we are approaching the halfway mark or so, and the twists and secrets start coming out. First Nyles’ secret about Sarah, and then Sarah’s secret about what she has done. And then we stop seeing Sarah for a while. Each morning, Nyles wakes up, goes to find Sarah, and she is not there. That’s because she has gotten up earlier than Nyles (during the day that is one repeat, she woke up earlier than him, which means every day she now wakes up earlier than him,) and leaves town.

We now spend time alone with Nyles, day after day, waking up and spending the day without Sarah. One one of these days, he is lying in the bed of the husband-to-be, Abe, hanging out with the groomsmen, when he recognizes a scent on the pillow. It is the perfume that Sarah wore. Nyles has spent so much time with Sarah at this point that he recognizes her smell, and he and Sarah have even had conversations about the perfume. Nyles figures out the secret about Sarah and confronts those involved in what happened to her. Only that’s just a small part of why she has been running away. The other part involves Nyles and the secret that he told her.

Nyles goes to see Roy to find out why the man has stopped coming after him and Roy explains that he figured out that this is about as good as it’s going to get for him. Time will never continue for him, and that stinks, but at least he gets to live again and again in a perfect day. And he has come to terms with that. This is a nice ending to the Roy story, although there is mid-credits scene that takes the ending even further.

At this point we join up with Sarah and see all of her time loops that she has been involved in, since we last left her. We see how she was determined to find a way out of the cave, and started studying quantum physics and having conversations with professors. Sarah started working out the situation scientifically, mapping it out on napkins at diners. And she even used a goat to try out an experiment and see what happened. Sarah figures out a solution to the cave-time loop problem and she shows up at the wedding again to share it with Nyles.

The ending involves them dealing with the time loop situation once and for all. These Groundhog Day-like movies always seem to end way. It’s all about trying ton get out of the loop. And none of the explanations ever make sense, of course, because the time loop itself doesn’t make sense. The explanations in this movie are pretty confusing, and don’t even add up… whatever happened to the goat should have also happened to Nyles and yet he appears at the wedding again with Roy one more time. Still, it’s easy to pick apart time travel or time loop movies, and the best way to approach them is to just got with it. Aside from some small logic issues, this movie is pretty good. It is plenty funny and gives us a clever take on a somewhat familiar plot. One thing that works for this movie in particular is seeing the time loop play out for two different characters at the same time, and therefore actually getting to live through each of their time loop situations. Another thing that really helps are the multiple twists, each one feeling like a nice, smart addition to the story. And unlike other movies, which tend to save the twists for the end, this one finds the perfect moments, in the middle of the story to drop them in, and give the movie movie some new life and energy. All of this adds up to a pretty good film.