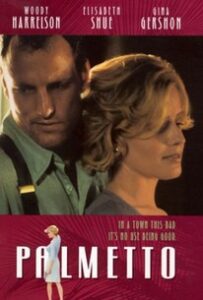 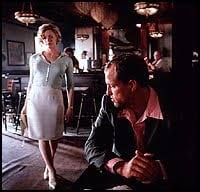 The pieces are there for a decent film noir, but something just feels a little clunky here, like it is paint by the numbers without much effort toward being anything unique.

This is an okay film noir. It doesn’t do anything to make it especially lousy, but it doesn’t exactly do anything creative either. There’s a plot point where the protagonist, who is involved in a kidnapping gets hired by the police to work with them (as the press liaison,) and be there at all times during the investigation. This, of course, is pretty ridiculous…even if he was hired for this, would he really be there, at the crime scenes, or round he just be briefed by the detectives after they got back? But it’s this movies attempt at creativity, (even though it is pretty much a staple of noir that the character being investigated is also the one working the case, ever since Double Indemnity.) Palmetto isn’t much fun or humorous either. The story is okay, but everything happening here has been done even better in other movies.

Palmetto is a movie that follows all the rules of film noir to a T. And that’s exactly the problem. There’s nothing creative or unique or different about this movie in any way. It’s about a down-and-out loser who comes to town, gets seduced into committing a crime, gets in over his head, has the wool pulled down over his eyes, and learns that not everything is what it seems. We’ve seen this kind of storytelling a thousand times before. Double Indemnity, the classic film noir that more or less started it all, (technically the Maltese Falcon was the first, but Double Indemnity cemented it,) was basically this. A guy seduced by a woman into killing her husband, who later learned that he was betrayed and setup to take the fall.

In Palmetto, our protagonist is Harry Barber, a former journalist with the local newspaper who has been incarcerated for two years. The movie opens with him being told that he will be released from prison. The detectives have figured out that it wasn’t Barber who committed the crime. Upon hearing this news, Harry is at first ecstatic, knowing he is free. But then it hits him that the two years spent in prison have all been for nothing, and he gets angry at the judge, (who speaks to him over a TV set,) demanding the two years of his life back. Right away, this movie isn’t off to the best start.

First of all, the film opens with a closeup of a cockroach, and we will continue to get images of cockroaches throughout the movie. Considering it is one of the more disgusting insects around, the kind most people despise, it’s not the greatest image to be showing the viewer. But, of course it is meant to be a metaphor, to show that Harry is a cockroach, or is treated like one. But then there’s his demand for the system to give him the time back (which of course is not possible.) Anger is one thing, but if he’s in there knowing he didn’t commit the crime, then this is the best he could hope for. Meaning he must have been hoping this day would come,  and would be thrilled that it finally did. But perhaps he’s just angry that he’s not getting an apology of any sort for the mistake made by the detectives that cost him two years of his life.

So now Harry is going to Miami to start over, when he runs into an old flame who twists his arm and gets him to come back with her to Palmetto, the town where he had all the trouble. This former girlfriend is Nina, and the way she just shows up in the middle of the street with her, “shut up, Harry,” line is a little ridiculous. It is meant to say this guy is such a loser that he doesn’t even have free will, and if she wants him to come back to Palmetto, he’s going back. But without any kind of explanation to who this character is, it feels odd. Of course we learn shortly after that, that Nina is an old girlfriend who now takes Harry back in, and is an incredibly successful art maker and dealer.

Harry, meanwhile, has no clue what to do with himself. He’s a writer with nothing to write. He spends his days sitting in a bar, trying to think up ideas, and not having any luck. The bar is empty, other than the bartender, and Harry always orders a shot of bourbon that he does not drink. He’s a recovering alcoholic. So why order it? It’s meant to be interesting, of course, like a character trademark, but really it’s pretty dumb. And the idea, in terms of what it means, must be that Harry likes to torture himself and tempt himself at the same time. He is offered a job by Nina, to deliver things for her, but gets angry at the idea of it. He doesn’t want to be her “errand boy,” or take work out of pity.

And so when Rhea Malroux walks into the bar looking for someone to do a job for her, Harry gladly agrees. He doesn’t just accept the job, but he certainly shows interest. It all starts with Rhea intentionally leaving her bag in a phone booth to see if Harry will take the money inside. He does. And then she tells him about the idea of kidnapping her step-daughter, Odette Malroux. Odette is in on it, and will really be going out of town for a few days until her father pays the ransom. And then she and Rhea will split the money and Harry will get ten percent. All they need from him is to be the voice on the phone asking for the ransom, and to be the guy who picks up the money after the drop-off.

Harry is interested, but he wants to make sure he is not being set up first. The reason why he ended up in jail was because of a setup. He had come across some corruption going on, and planned to expose it. At that point money was offered to him to keep quiet. Harry refused the offer and the money turned up anyway in his bank account. Only this time, it was followed by the police who got a tip about it, and arrested him. Harry tells this story later on, to help explain why he accepts Malroux’s offer. The last time he turned down an easy payout, he ended up in jail. But before accepting the offer, Harry goes to Malroux’s house to make sure Malroux really is who she says she is. He finds her working in her garden, waving up to her husband who watches from a balcony. We also meet Malroux’s bodyguard, Donnely, (Michael Rapport,) an ex-cop, at this time.

Harry now asks Rhea to come to his rented bungalow on the beach, to work out the deal. He tells her he wants to meet with Odette, to make sure the girl is actually in on it. And so he does. All of this feels like dragging the movie out. Sure, it’s nice that Harry wants to cover his bases and make sure nothing suspicious is going on, and that he can trust these people. But at the same time, crossing every small bridge so carefully just makes the movie feel kind of tiring. Maybe if the scenes where these women came to meet him were more interesting, it might have helped. Sure Rhea Malroux seduces Harry, and he records the conversation, but something seems missing. Even more so in the scene where Harry meets Odette.

The kidnapping happens, the police find out about it, and then they go to Harry to offer him a job. They know he was a former newspaper reporter, and a lead detective there is the brother in law of Nina. So he offers Harry the position of being the press liaison, which means handling the press in terms of filling them in on what the police want them to know about the investigation. Mainly the point of his job is to get the press off the backs of the detectives so that they can work the case. But the criminal who is also working the investigation on the police side feels very cliched. It’s another one of those ideas that goes all the way back to Double Indemnity and has been done again and again. Te kidnapper his movie doesn’t exactly handle it so well either, having Harry put his shoe up against the footprint of the killer and tell the police the killer wears the same size shoes as him, or having the detective make a similar comment when a description of the kidnapper comes in. “He could be talking about you,” the detective says, jokingly. It’s not very funny.

In fact, a big problem with this movie is the tone. It wants to be a black comedy, only it’s not very funny. The jokes a simple-minded, (Harry shouting “yes” over and over again while driving, after getting the money, then finding the dead body of Odette and shouting “no,” while driving back. But the problem is also in the storytelling. There’s very little believable here, including that Nina would stay with Harry after everything he puts her through. First, he’s a deadbeat who has just gotten out of prison and has no direction, while she is incredibly successful. Next, she finds out about the dead body. And lastly, she finds out that Harry cheated on her. But this movie just wants us to roll with the fact that she stays, saying, “well, some women do that.” It doesn’t work. What is meant to be a surprise at the end doesn’t really work either. The only twist in this mystery that is kind of cool is the way that two different dead bodies show up in the bed at Harry’s bungalow, and what each of them means. The movie isn’t bad. It’s playing in a genre where if you do things right, you are pretty much guaranteed to at least be okay. And that’s exactly what happens here. The movie does hit the right notes, in terms of the staples of the genre. And it does include some twists along the way, which help give the story some momentum and fresh air. It’s just that there isn’t a whole lot that is creative here, and that definitely hurts.