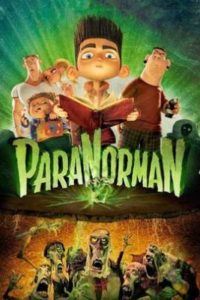 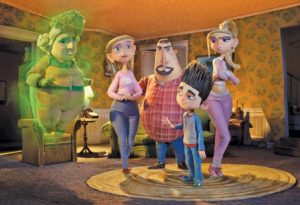 Not quite on the same level as the other Laika films, this one might have fun with the zombie gross stuff, but the story is just a little too simple to work on the same deep levels as those other movies.

The worst of the four Laika films, (Coraline, Boxtrolls, Kubo and the Two Strings, and this one,) it’s not that the movie is bad or anything, it’s just nothing special. At all. What we have here is a pretty standard story of a boy who sees and talks with ghosts, and a town that is attacked by zombies. There’s a reason for all of it, and even that feels kind of generic too, although the movie treats it like a great, big mystery. The cool thing about this movie is the way it combines ghosts, zombies, and witches into the same story, without any of those three feeling forced or stuffed in. Instead, the zombies want to be ghosts so they don’t have to walk the earth, and can just fly off to a better place. But this is just a small part of the story that is mainly about a boy out to save his town and stop the zombie invasion. It’s a fine film, but the high creative energy that we’ve come to know and love from Laika movies just doesn’t seem to be present with this one.

Paranorman is an okay movie. It’s fine, and somewhat interesting, but for the most part it feels very familiar. This is the story of a kid who sees ghosts (think The Sixth Sense,) and has to help a town that is cursed from an attack by an army of zombies. It all feels kind of generic when compared to some of the other movies by this studio, Laika. These guys are the first names in stop motion animation, a medium that has really been relaunched with their company to the point where it can compete (in quality, but certainly not in the financial market,) with the Disney computer animated films that are being released today.

Laika is the company that made both Coraline and Kubo and the Two Strings. Those two movies were as different as could be, but both were absolutely fantastic. Coraline is a movie about a girl moving into a strange house and discovering all sorts of secrets, including mysterious neighbors and passages to another parallel dimension. That movie is the closest thing to an animated nightmare that you can imagine. And then there’s Kubo, which is even better. That movie is about a boy in Japan learning to survive the wrath of his evil Aunts and Grandfather, while learning about his own powers and heritage.

In both movies, the animation itself is spectacular. Coraline is so dark and grainy that you actually feel frightened and freaked out while watching an animated film. And Kubo captures the mystical atmosphere of a Japan filled with farmers and the legends they believed in. With Paranorman, a movie that was made by the studio in between those other two, the animation is okay. There’s nothing that stands out as being especially impressive, and that’s kind of shocking considering how great this studio is. But the movie feels like the sort of usual moral tale about a town that did something terrible once to a girl and is now paying the price.

At the start of the movie, we meet our protagonist, Norman, the boy who speaks with the dead and is completely misunderstood by nearly all other humans. These include his parents, sister, and the kids at school. Everyone except for his best friend, an overweight kid named Neil, who is bullied,himself. Norman’s family is frustrated by his refusal to admit that he doesn’t see ghosts and is making it all up. He sees his grandmother sitting on the couch everyday and has conversations with her, much to the displeasure of his parents. Norman is seen as a freak in the town and made fun of as the weird kid who talks to ghosts.

The movie does a lot to show us the horror atmosphere and how it is all around Norman, towards the beginning. He watches zombie movies at home, and the school play is all about burning a witch. Apparently this really happened in the town and it’s like a town legend at this point. When Norman is on stage, acting in the play, he sees zombies and has a meltdown, causing the whole production to become. a mess. Norman’s father is not too happy.

Norman gets a message from his dead grandmother that he is going to have to help out a guy named Penderghest. Then, this Penderghest shows up and tells Norman that he had to come and find him, and take a book from him. Penderghest dies and Norman goes to find his body. When he does, the book he takes out of Penderghest’s dead hands kicks starts a whole big problem. Suddenly zombies start rising from the graves, and Norman and his friend, Neil, go on the run. They are quickly joined by Norman’s sister, and the body building dummy she likes because of his muscles, Neil’s brother. The voice talent here is pretty good, including Anna Kendrick as the sister and Caset Allfeck as Neil’s older brother.

Norman and his friends drive around in a car trying to escape the zombies, but these creatures aren’t just after them. They’re after the entire town. And the town isn’t tasking it laying down. They bring out their pitch forks and start rallying in the streets. Only instead of fighting the zombies in an all out war, the people take their anger out on Norman. They think all of this is somehow his doing, and when Norman and his friends go to library to search for answers in the archives, the people of the town attack the library.

All of this leads to Norman realizing what the zombies want. The common story about ghosts is that they always want something and are sticking around because they’ve got unfinished business that needs to be tended to. Here, the same is true of the zombies. They are cursed and need Norman to set things right in order to turn them from zombies to ghosts, where they can fly away and live happily, (or something like that.) Norman uncovers the truth of what’s behind all of this, but it kind of feels like a letdown considering how simple it is, and how the secret was basically telegraphed since that opening play and story about the town.

The movie is fine, but the problem is that the ambition and drive that made the other films work so well doesn’t really seem to be there with this one.  Those other movies, (Coraline and Kubo,) worked for completely different reasons, and yet together they pretty much covered all areas of the spectrum. They were either perfectly confined to a single building for some nightmarish exploring or pushed the boundaries of magic with imaginative and mystical storytelling about al kinds of powers.. Paranorman, on the other hand,  is a straight forward zombie movie. Sure, there’s a curse and some backstory, but the movie really doesn’t go much further than that.

The positive about the story is the way it combines zombies, ghosts, and to a certain extent, even witches. It does that seamlessly, not just throwing them all together as characters of a Halloween world or something, (the way a movie like The Nightmare Before Christmas did.) This one is all about the zombies wanting to be set free to turn into ghosts. And the witch craft comes in with the story of what the town once did, and how they misunderstood a girl who was different and talked to ghosts (just like Norman does now,) and accused her of being a witch, before issuing her a punishment and carrying it out. This story and where it goes is pretty neat, but the movie still feels like a basic zombie film with the creatures chasing characters around the town until they find the solution to stopping the curse. It’s an okay movie, just not as great as those other Laika films, or even on the same level.