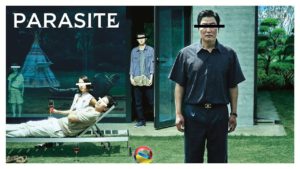 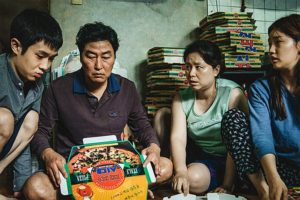 An interesting movie with a pretty cool premise that just gets a little too carried away in the second half.

The premise is pretty good. A poor family with lots of problems decides to infiltrate the life of a wealthy family. The way they do this is by posing as people who can work for the wealthy family in their home. By posing, what I mean is faking that they have experience in doing such jobs, and pretending like none of them know each other. But what they also do is plant things and set the scene for the current employees of the home to get fired, therefore opening the doors up for more jobs that their family members can fill. It’s all pretty interesting for a while. And there’s even a twist at a around the halfway point. But then things start to get a little too strange after that. And the ending doesn’t quite fit. A good movie for most of the way through, this one just needed to figure out its ending a little better.

Parasite is the new movie by Korean filmmaker Bong Joon Ho. This is the guy who made The Host, Okja, and most notably Snowpiercer. That’s four movies that have been visually interesting and artistic, almost in a Guillermo Del Torro kind of way, (after all, two of theses movies do feature creatures / monsters, just like Del Torro’s films.) But there’s a problem. All of Ho’s movies tend to be lacking, to some extent, in storytelling. Each one is built around an intriguing premise that is able to get the movie to the halfway point or even further, with some real interesting ideas. But then it’s the second half of these movies where things start to get less and less interesting, until they just run out of fuel. In the case of Parasite, the second half does continue to bring new twists, for a while, and then by about the three quarter mark the story hits a wall. It’s good for most of the way through, but it sure doesn’t know how to wrap things up.

Parasite is the movie of Ho’s that has probably gotten the strongest reviews and acclaim of any of his films. This film won the Palme D’or,  which is such a prestigious award that the last American movie to win it was Pulp Fiction, back in 1994, (other American winners include Sex, Lies, and Videotape, Appocalypse Now and Taxi Driver.) Parasite will most likely win the Oscar for best foreign movie of the year, and that’s kind of cool as well, (last year’s winner was Roma, another very good film.) And with Parasite, one thing that makes it kind of special is just how simple the premise actually is

There are two families, a rich family and a poor family. The poor family, The Kims, more or less infiltrates the service positions inside the rich families house, by faking who they are. The members of the Kim family are our protagonists. They live in a basement of a building in an alley where there are disgusting conditions including insects and  drunks who stumble into the alley to urinate right on their window. The movie begins with us watching the family inside their home, dealing with these issues. At one point, the son (Ki-Woo,) and the daughter (Ki-Jeong,) climb up on different ledges and landings in the apartment, looking to get a WiFi signal by stealing it from a neighboring location. They find one in the corner of their apartment and have to crawl up into this tiny space just to use it. At another point, fumigation is sprayed throughout the alley. The gasses move swiftly through the air, to the point where the family members shout, “quick, shut the windows.” But the father, Kai-Taek, tells them to leave them opened, because they’ll get free extermination.

All of this leads to a pretty funny and entertaining beginning. Things are obviously not going too well for the members of this family. The mom, Chung-Sook, tries to get a job delivering pizzas, but a requirement is that she fold the boxes, and she can’t seem to fold them correctly. This makes the owners of the company angry, to the point where they want her to pay for the damaged boxes. It goes without saying that this job doesn’t quite work out. And so the family members are in trouble. But then an opportunity comes their way.

Ki-Woo is talking with his friend, who has come to visit, and the friend lets on that he’s going to live overseas for a few years. He has a tutoring job here that he will be leaving behind, and it pays really well. So he wants Ki-Woo to take over, despite the fact that Ki-Woo has no tutoring experience. Ki-Woo agrees, leading his friend to recommend him as a  tutor to the family, The Parks. Pretty soon after that, Ki-Woo, is going to the house for the first lesson, with the mother sitting in, and faking it all the way.

Pretty soon, Ki-Woo learns that the Parks want an art tutor for their son. And so he tells them that he knows someone, and that someone he is thinking of is his sister, Ki-Jeong. Only he doesn’t tell them she is his sister, and like him, she has no real experience at all. The whole thing is a fake, hence the title of the movie, which is about people who prey on others.  Watching Ki-Jeong come in and pretend to be an art teacher is especially funny, since she approaches it with a much tougher approach than Ki-Woo. For example, unlike her brother, she does not allow the mother to sit in on the first lesson, and has the confidence to tell the mother this, despite the mother being her boss.

Once the two of them start working at the house, it becomes time to take  things to the next level. Ki-Woo and Ki-Joung get devious and start planning how to get the house keeper, Moon Gwang, and the driver fired, so that their parents can get jobs in the house as well. This involves framing the driver to make it look like this man uses the car to have sex with women in the backseat. It also involves rubbing things on Moon Gwang that she is allergic to, causing her to have breakouts and terrible reactions. With a little influence from the Kims, who say they saw Moom Gwang at a hospital getting treatment, they are able to convince the Parks to fire her. And so Chung Sook takes over that position. This pretty much leads us into the second half.

The second half of the movie continues to have twists. There’s one involving the Moon Gwang, who still has more to her story besides just getting fired and then leaving, (unlike the driver, who really does never appear again after he is let go.) And then we get the night where the Park family goes out of town, and the Kim’s stay at the house, enjoying a night of luxury. At this point it seems like they have fully taken over, at least for the night. But then some unusual things start to happen. It starts out interesting, as we discover secrets not just with the characters, but also with the house. But then, at a certain point, the ideas just stop.

Our characters find themselves hiding under a table, with the Park family parents lying on the couch beside them, having no idea that they have company. And from there, the movie pretty much goes downhill. There’s a flood sequence that is kind of dull, when it should have been interesting, and then a party sequence that is more disturbing than anything else. The events that happen here don’t have enough explanation or justification to make them work. And we leave the movie feeling a little short-changed.

A number of the sequences in Parasite are fantastic. The scenes of the kids planting things in order to get Moon Gwang and the driver fired, for example, are top notch. But the movie just doesn’t seem to go far enough or have enough follow through in its final act. We expect the Kims to take over the Park’s entire lives and home, in a Talented Mr. Ripley, kind of way. So we are expecting something kind of big. And when the movie doesn’t deliver anything close to that, we feel a little short-changed. Especially when what we do get, instead, doesn’t quite connect. There’s a lot to like about this movie, which probably is Ho’s best film to date, (Snowpiercer might be his most popular, but that’s probably more due to its all star cast than it is to the story. Parasite is a good movie that just needed a tighter ending.