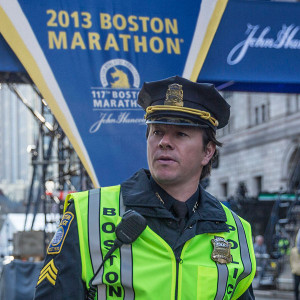 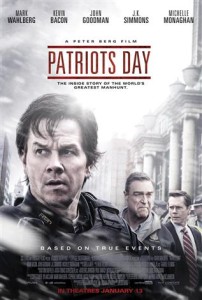 A pretty thrilling movie about the Boston Marathon terrorist attack, the chase and hunt to get these guys is great, but the characters could have been a little more interesting.

This movie is great. It captures the investigation and closing in on the terrorists who did the Boston marathon bombing brilliantly. It gets inside the heads of both the terrorists and the FBI investigators. The only thing it doesn’t do so well is find the right characters to spend time with in their home lives, outside of the investigation. But the movie doesn’t dwell on these parts and is much more about the bombing and its consequences. Maybe there could have been fewer characters and a tighter focus (for example, this movie even gives us the stories of the victims,) but as far as the terrorist and investigation stories, this one knocks it out of the park.

Patriots Day is the movie that chronicles the true story of the Boston marathon bombing. It does this by showing us every angle it can think of, including the investigation, lives of the terrorists responsible, the lives of anyone who these terrorists will later come in contact with, such as the police officers who will be getting involved. This multi-angle, multi-dimensional approach turns out to be both a good and the bad thing for the movie.

The good is that it gets us interested in all the characters. So, for example, we learn about the Asian student who will later get carjacked by the terrorists and taken along for a ride with them. Now he’s an integral part to the story. He’s the one that escapes the terrorists, runs to a gas station, and calls the police, leading to the narrowing down and closing in of the investigation. But at the same time, we see the lives of much less significant characters to the story, such as the cop, played by JK Simmons (no doubt his home life role is beefed up just because the movie got an Oscar winner to take the part, and wants to use him for more than just one quick scene.) But does this serve the story? No, it does not.

And while we we are spending so much time getting to know the characters who will later on, somehow be involved, (like the security guard who the terrorists shoot and kill at MIT,) we are not getting enough about some of the more relevant elements to the story. For example, we could have definitely used more about the terrorists themselves, and about the cop, Tommy Saunders, (played by Mark Wahlberg.)

The terrorists are probably the most compelling and interesting characters in the movie. They are also the scariest part, and the villains of the film. Learning about their relationship with each other, (the older one is dominating and bullies the younger one,) and the way they see the world is both disturbing and fascinating. For example, when they kidnap the Asian student, they talk to him about September 11th, claiming that it was the U.S. government who did the attacks as a plan to get the world to hate Muslims. They claim that any Muslim who confessed to being involved and responsible was actually an actor hired by the United States government.

Getting into the mentality of characters like this is definitely a unique approach. There have been countless movies about real life terrorists, from United 93 to Zero Dark Thirty, but we don’t often get a look inside the terrorist’s heads. Similarly, when we hear the lines of thinking by the police officers and FBI agents running the investigation, we understand a little more about these characters and where they are coming from. Saunders has the  idea to get the people of Boston to help catch the bad guys. He tells the FBI that the people will not see it as ratting to the cops, but instead will view it as protecting Boston. He finds a way to get the people to stand up for the cops and work alongside them, and he turns out to be right.

The movie does an excellent job of showing us the investigation from the very beginning. In fact, this is probably the best thing about the film. Inside their headquarters, the FBI sets up a replica of the street area where the bombing took place (at the finish line of the race,) and Saunders comes in and walks through it  As he looks in every direction, he’s able to tell the FBI specialists what store he’s looking at and where the cameras are. Then the FBI hacks into cameras, types in a time, and tracks down where the terrorists were in each moment. This is used to both find the first terrorist (the only guy to be turned away from the bombing at the moment of impact,) and then to see that earlier on in the day he was working with someone else.

While the investigation is superb, a part that doesn’t feel as well-done is watching the home lives of the characters involved. For the Saunders character, it makes sense since his wife (played by Michelle Moynahan,) will be at the race during the bombing, but for so many other characters, it doesn’t. And even the Saunders and his wife story could have been better. We barely get to know them, other than some corny dialogue, (“I can tell your blood alcohol level by the sound the key makes when you try to open the door.”)

Luckily the relationships they don’t work aren’t really given too much screen time. The movie just has too much else to get to, including the lives of the running victims, who got injured from the bomb. If the first half of the movie is about meeting and getting to know the characters, then the second half is about the investigation, and that’s where the movie really soars. From the college roommates who try to hide the fact that one of their roommates was a terrorist, to the street shootout with tons of pipe bombs exploding cars into the air, it’s incredibly intense.

Patriots Day is a pretty great movie. Almost everything about it works. The investigation is superb. Getting into the lives and heads of the terrorists is fascinating. The moment when one of them turns on the other, and blames the other one for something that happened, for example, is terrific. The home lives of the police officers involved is the one area where this film falls short, mainly because they are unnecessary. But other than that, this is an all around terrific film.