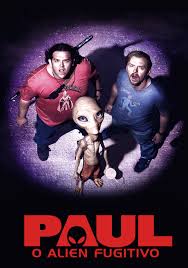 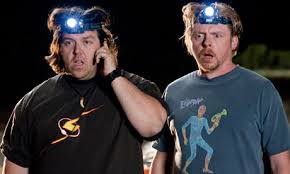 A very average movie, occasionally funny, but for the most part nothing special or memorable.

There’s not much going on in the movie Paul. not much besides the initial premise anyway. when I heard that Simon Peg and Nick Frost were teaming up for another movie together, I was ecstatic as I’m sure a lot of other people were too. these two guys were the stars of buddy genre spoof films Shaun of the Dead and Hot Fuzz. Shaun was their breakout and it was pretty good. hot fuzz was even better. both movies did wonders for their genres. Shaun capitalized on zombie culture so much that since then there have been other zombie spoofs (Zombieland) and even a zombie TV show (the walking dead). and both are tremendously Popular. hot fuzz not only gave us a send up of the buddy cop movie, but also of the mysterious serial killer in a small town situation. both movies are pretty brilliant and these guys clearly proved that they were great together.

but there was one missing ingredient that those two movies had and Paul did not. director Edgar Wright. the guy who directed both Shaun of the Dead and Hot Fuzz. instead of making Paul, he chose to make Scott Pilgrim Vs. The World, a great and innovative movie. Paul, by contrast, looked to be just the same old thing. we were all super psyched that Pegg and Frost were doing another movie together, but then the trailer came out and we saw how stupid this movie looked. it’s great that they are playing best buds again, but a movie about them finding and hanging out with a cool alien? that sounds like a plot from the movies of the eighties when Alf was the number one show on TV and E.T. was dominating theaters.

still, having these two guys on board was enough to entice other comedic actors in their prime, to joining the cast. and so we get Kristin Wiig, Jason Bateman, and Bill Hader. aside from that, our two heroes are playing nerdy fan boys who start the movie off going to comic con in San Diego before taking a trip of the new Mexico UFO sighting hot spots. all of that seemed like a good way to start the film.

and so the movie begins, and it isn’t very long until they are driving around one night and see a car accident on the road. they pull over and are approached by the alien, Paul (voiced nicely by Seth Rogen.) frost’s character, Clive, passes out, leaving Graham, (Pegg), to take the alien in. does this and drives around with him for a few hours, trying to make sense of things. when Clive wakes up he’s not too thrilled about having a strange looking alien in the camper with them.

but all that changes after the boys and Paul get to talking more. Paul is very funny. it’s a good thing, because this movie felt like it was going nowhere fast. Paul talks about how everyone thinks he’s going to probe them and wonders why. “what am I trying to harvest farts?” he asks. Paul’s frustration with humankind is one of the key ingredients to the humor of this movie.

the story really just has the characters driving around from place t0 place, trying to avoid the authorities. there’s a hunt out for them, with Bateman leading the pack and two idiot agents working under him. they are kept in the dark about what they’re after and come to resent Bateman’s character all the more because of it. as if Pegg and Frost weren’t playing dumb enough guys, these two idiot agents bring it down even further.

despite having so many dumb characters in the movie, (Kristin Wiig isn’t much better, playing a religious freak who has never experienced lots and lots of things,) the film never feels stupid. it never goes for slapstick or lazy laughs. it’s just that it’s very plain. strange to be saying that about a movie about an alien, but it’s true. for example, Graham and Clive have no back-story. we don’t hear about what their lives were like in the past or anything like that. Wiig’s character has even more back story than they do, with her strange eye patch going on.

the movie is basically lazy. by the final act, some kind of story is finally formed as we learn who is really on what side and are supposed to care. at least there’s something going on at that Point other than our heroes being chased around. by the time we finally get some real plot Points at the end, with the appearance of a new character, it’s too little, too late.

That being said, this movie is not bad. Pegg and Frost are natural comedic talents, and even if they are given nothing to work with (which is almost the case here,) they still manage to shine. Seth Rogen is also very good in his part and gets the biggest laughs of them all. Rogen is not only an actor, but a writer, and he’s usually in touch with what works. he’s had a few missed here and there (Funny People, Observe And Report), but more often than not he’s the funniest part of the movie (50 / 50.) Paul is certainly one of those times.

the movie might not be anything special at all, but it is still enjoyable in the moment. it gets better as it goes on, and we do like spending time with these characters. similarly, it also gets better the more times you see it. It’s a throw away movie that was never meant to be anything great, and so it isn’t. However, plenty of throw away movies were given the right kind of attention and turned into monster laugh riots. movies like Superbad. Paul is nowhere near anything great, but at least it’s sometime kind of fun.