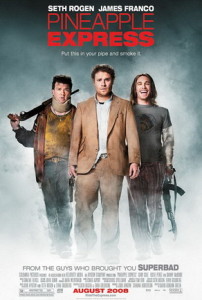 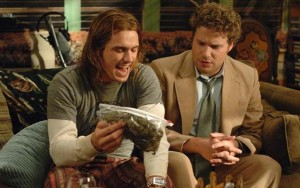 A funny and violent stoner comedy crossed with a crime movie.

Pineapple Express is kind of unique for a stoner comedy. that’s because unlike dazed and confused, half baked, or any of the usual films in this genre, the movie is about more than just getting girls and partying. this movie is about crime. it actually has a plot. and it’s got action. and having these other things going for it just makes the comedy even better because even when a joke doesn’t work, the movie is still entertaining in other ways.

Pineapple Express came out the summer after seth rogen emerged as a movie star with knocked up and superbad. both of those movies were tremendously fun. Pineapple Express doesn’t quite reach the same levels of excellence, and that’s partially because of it’s subject matter. this movie might have worked as an older version of superbad, with guys in their twenties and thirties taking the place of those high school kids, and the crime pushed off to the side, but more likely than not, it would have been sad. those kids in superbad had to deal with fake ids, getting alcohol, dealing with the cops, and crashing parties. Pineapple Express wanted to be something different. it set out to be a stoner movie, and while not a great film, it still pulled it off with some definite success.

that’s because of the combination of a movie in this genre with a crime movie. the premise is simple… what happens if someone stumbles upon a murder, and the killer can figure out who the witness was based on the weed he was smoking. that’s because the killer is also the dealer who supplies this weed. there’s the coincidence that seth rogen’s character, dale denton, would be going to the house of ted (gary cole), and that ted is the guy who supplies denton’s dealer, saul (james franco). then there’s the coincidence that denton would mention ted to saul. then that dale would drop a joint outside of ted’s house, and then that ted would find the joint. but if you can get past all of these coincidences, (and none of them is really totally unbelievable), then the plot actually works.

more than the storyline, however, what really works about this movie is the comedy. seth rogen is a great comedic actor. he doesn’t always deliver, as could be seen by his movies observe and report and funny people, but more often than not, if one of his movies is funny, it’s mostly because of him. that was the case in the green hornet, a movie that worked only because of it’s comedy and the ridiculous relationship between brit reid and kato. similarly, the main reason Pineapple Express works is because of the relationship between dale and saul.

dale is the rational guy who doesn’t take shit from anybody and doesn’t care what people think of him. but no matter what happens, he still keeps his head about everything. early on, we see him dating a high school girl (a strange choice for any movie), and interacting with her in the hallways of the school. when a faculty member comes over to give them a hard time, dale throws it all right back in that faculty member’s face, letting it be known that he doesn’t really care who you are. he’s still gonna stand his ground.

saul, on the other hand, is the genuine nice guy pot dealer. saul is the guy who is everybody’s friend. now he doesn’t let people take advantage of him either, as can be seen when two guys show up wanting to buy drugs that he’s not selling, but in general he’s very trusting of all around him. saul cares about his bubby, grandmother, more than anything else in the world, and the best thing about saul is that he’s a little crazy. he is constantly stoned and laughing, and while in another movie that might be annoying, here he is just always coming up with funny ideas. in fact, when we first meet him he is discussing with dale what dale does for a living, and he completely misunderstands. dale is a process server, meaning he serves people subpoenas. but saul hears him say “servant,” which means saul starts talking about butlers and shining shoes.

as if these two guys weren’t great enough, there is a third character who ends up befriending them and is just as funny as either one of them. that character is red, played by eastbound and down’s danny mcbride. Pineapple Express was really mcbride’s breakout movie. he had been in the foot fist way earlier, but that movie was something that most people had heard of, but not seen. and it wasn’t really all that great, either. in Pineapple Express, mcbride got to deliver his crazy ass monologues and ideas of what he thinks is cool. for example, his kimono with a dragon on it. this kind of detail, and listening to mcbride describe it is the exact same kind of thing you would find in eastbound and down, with mcbride’s character, kenny powers, talking all about it.

aside from those three guys who are all great in this film, the rest of the cast is made of talented actors as well. the villains are gary cole and rosie perez, two very recognizable actors. and they have two henchmen doing the dirty work for them, played by kevin corrigan and craig robinson. these two guys are especially funny. they bicker and argue with each other and even cry, the way no tough guys ever should. they are threatening and menacing, but they can also turn it off at any moment and become just regular guys with issues.

the thing that makes Pineapple Express work with it’s comedy is a sense of realism in response to ridiculous situations. when saul is driving a police car in a high speed chase and tries to kick his leg through the window, for example, like we have seen in so many police movies, his leg gets stuck. now he’s driving around with one of his legs through the window. when the bad guys shoot red, he takes a bullet to the stomach, but doesn’t die. and when saul tries to buzz denton in to his apartment, there is the issue of not trying to open the door at the exact moment it is being buzzed or else it won’t open. these are jokes about the way things really are in today’s society, and how other movies just look past them or take them for granted.

Pineapple Express is an enjoyable movie. by the time we find ourselves in the middle of the final action sequence, the movie has become somewhat tiresome, but that’s in large part because the comedy portion of the movie is done. so long as it has comedy running alongside the action and crime, this movie works real well. james franco is playing a character unlike anything he’s played before in movies, and he does a really nice job with it. in a lot of ways this movie really is like superbad, only the characters from that film are now about ten years older, and not really all that much wiser. instead of caring about booze, they care about weed. instead of caring about girls, they care about saving their lives. it’s a fun movie, gross at times toward the end, but mostly just a very funny film.