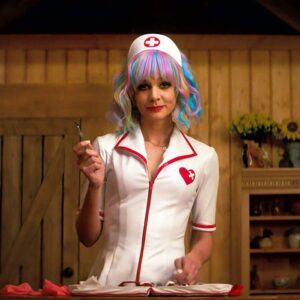 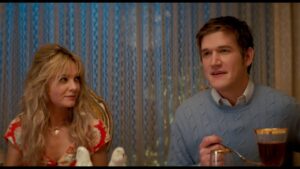 A pretty fantastic revenge thriller / mystery, this one really gets good once the plan is triggered and the mystery begins to unfold.

Promising Young Woman is a pretty amazing movie because of the way that it works on all sorts of levels. First, you have this incredibly interesting character story about a woman who is stuck in a shell of a life, with no seemingly way out of it. Then you have a mystery about what happened to her in the past. And then you have the revenge thriller, which is a mystery unto itself about what this character is going to do. The movie uses a Kill Bill style tally chart checklist, only this appears in the form of subtitles. The movie is suspenseful and creepy story in all the right ways, and it packs surprises that you never really see coming.

Here is a movie that seems like it might be a pretty standard psycho woman out to kill lots of different men story, basically a horror movie, and turns out to be completely the opposite. This isn’t a movie about a crazy woman, but instead about a woman who is out to set things right and seek vengeance for something that was done in the past. And the movie is nit only a revenge thriller playing out this woman’s plan, but also a mystery of what was done, what the results were, and how things ended up the way they are right now.

Now we’ve seen plenty of movies where the big reveal at the end is seeing this big event from the past, and learning the whole truth about what actually happened. Those movies tend to be all build up for one tiny moment. A good example recently was the terrible Denzel Washington movie The Little Things. The good news, regarding Promising Young Woman, is that it is not that kind of movie. There’s no final reveal at the end (although there is an unexpected twist, which is incredibly powerful, but it’s not us finally getting the answer to what happened.)

Instead, we put the pieces together throughout the entire film, and we get know just about everything that happened by about the halfway point of the movie. And this works, because now instead of having the same goal in the second half that we had in the first (to find out what happened,) our goal for the second half can switch to new ideas, new reveals, and new surprises that we had no idea were even possibilities during the first half of the movie. This evolving and opening up of new creative doors turns out to be a very good thing. It keeps the movie feeling fresh and interesting at all times.

Another great thing about the movie is that the mystery doesn’t start until a solid ways in. First we have all kinds of introductions to the characters and their eccentric lives. We learn about the unhealthy habit our protagonist Cassie (played by a never-better Carey Mulligan,) and also witness the development of a relationship from its opening stages all the way through dating. In other words, the plot is interesting already to begin with, and is already solidly in motion by the time an even better storyline suddenly springs into gear and takes over. And the next thing we know, we are strapped in on a roller coaster ride of a chapter by chapter, crossing off a tally list, Kill Bill style revenge thriller. It’s pretty amazing how the movie doesn’t appear to have this agenda early on, and is still pretty interesting before this real plot line even begins.

And that Roman numerals turned into tally marks concept (marking down each person Cassie goes to see as one more person Cassie has to “take care of,” and one more clue about the past,) turns out to be another excellent move. It keeps us curious about who is next on the list end whet new information will be revealed. And it also keeps the audience trying to figure out what Cassie’s end game will be. At a certain point, we definitely realize the way things are building and who her final target will be, but how it’s going to happen and what exactly Cassie will do still remains uncertain. And that also keeps the momentum going the whole time…. fact that there are really two mysteries going on here at once, what happened to Cassie and her friend, Nina, in the past, and whet Cassie is planning to do about it now.

But let’s backtrack for a moment and look at how all of this really happens. We meet Cassie for the first time when she is acting drunk, pretending to be nearly passed out on a couch at a bar. In fact, we hear guys talking about her before we even meet her. One of the guys goes over to see if she’s okay, ends up taking her home, and tries to take advantage of her. That’s when she drops the act, and surprises the guy with the truth about her sober condition. We don’t see where this scene ends, and what she does to the guy, since it. It’s to black, but it definitely gets our attention.

From there, we cut to Cassie coming home in the morning, to a house she lives in with her parents. They aren’t exactly very approving of Cassies lifestyle, and we learn that Cassie does this every weekend and doesn’t really have friends. Next we are in the coffee shop where Cassie works. We see her manager, who is the closest thing Cassie might have to an actual friend. And we watch as a guy named Ryan, who Cassie used to go to medical school with, walks into the coffee shop, recognizes Cassie, and then he’s up getting her number.

The next batch of scenes continue to establish Cassies life. We see her pull the “I’m not really drunk,” routine again, with another guy (the first was played by Adam Brody, and this second guy is played by Superbad’s Christopher Mintz Plasse.) This time we see a little more of what Cassie does. We see more of Cassies relationship with her parents. When they buy her a suitcase for a birthday present, as a way of saying she needs to get out and either leave or at least go on a trip somewhere and start experiencing things. And we also watch as the relationship between Cassie and Ryan develops. Things don’t exactly go smoothly with that one. First there’s the insult which leads to Cassie spitting in Ryan’s coffee, then the fake number, and then the date where he tries to get her to come up to his apartment by being sneaky about where he lives.

All of this is interesting and different, but it’s nothing compared to what is to come. On one of their dates, Ryan reveals some stories and  information about some of the other people they were in Med school with. And one name that comes up triggers something in Cassie. It’s hearing that this guy has moved back to the states she is getting married that sets Cassie off. And suddenly her plan is set in motion. Now, this becomes a revenge movie of sorts with specifically chosen targets, unlike before where they were all random guts he met at bars.

The mystery and revenge plots both work simultaneously. Each person Cassie visits or meets with is someone who is connected to what happened. Each person reveals a little more. And each person suffers Cassie’s punishment. We’re not talking about torture or anything like that. This is not a horror movie, but more of a psychological thriller. As we move throughout one target after another, it seems like Cassie is using a system to keep track, be it Roman numerals or tally’s. By the end, we realize exactly what’s happening. And nearly every person Cassie visits is played by a famous actor. From Connie Britton to Allison Brie to Alfred Molina, this is one jam-packed film with stars. There is so much to like about this movie, including Carrie Mulligan’s head-turning performance and the wonderful music choices. The ending has some downer moments, but still managed to come through with its surprises. And as much as the ending might be hard to swallow, it does seem like the necessary place this movie needed to go, to the bf Ruth something extreme and unforgettable. What a great mystery and a terrific film.