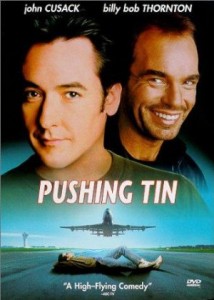 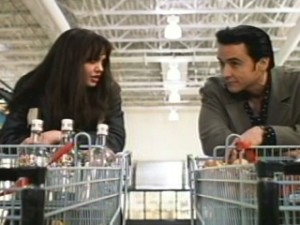 A movie set in a pretty cool environment, the world of air traffic controllers, turns out to be a somewhat routine story of romance and competition.

Brief review: there are some important things to like about this movie, starting with the world that it is set in where our main characters are air traffic controllers who land planes for a living. these are the guys who sit at control monitors and bring the planes in. and nick falzone (who they call the zone because of how good he is), seems to have it all under control until a new guy shows up and throws off his game. the first half of the movie is about nick dealing with this new guy and the second half is about him and his wife, as they begin to have problems. all of it feels pretty routine and that’s the problem. instead of something different that we’ve never seen before, this movie ends up feeling like a romantic comedy, complete with an ending that’s as silly as anything else in the movie. it’s not a bad film, but would have benefited from a little more ambition to be something great, or at least unique.

The best thing about Pushing Tin is the setting. this movie takes place in the world of air traffic controllers and gets so into the job that not only are our two lead characters in this business, but so are all of their friends. it’s a very interesting job and fun to watch the actors doing it. but the movie that takes place outside of that world, which involves their wives and affairs isn’t half as exciting as everything going on in the workplace.

you can just hear the pitch of this movie being proposed to a studio. an air traffic controller is in control of the fate of everyone who ever takes a flight, and is a perfectionist about everything until it comes to his own life. this guy is so down to the second perfect, such an expert at everything he does or will do, and then suddenly his world comes crashing down when some new competition enters the picture.

we see nick falzone (john cusack), running the show, talking a mile a minute and knowing other people’s jobs better than they do, from the very beginning of the film. he’s at a restaurant with his friends, trying to order from a waitress, and they all start talking at once. nick grabs the pad from the waitress, writes all over it, and then runs over to the chef in the kitchen. he then proceeds to give the order himself, speaking a mile a minute, as if he knows the secret language of waitresses and cooks.

ordinary life is mundane for a guy like this. he’s got a beautiful wife (cate blanchet), and two great kids, and yet he’s bored. life just isn’t exciting enough for him anymore. even his job has become too easy, and he needs something to spark his interest and get him more involved. that’s when russel comes along. nick’s first encounter with this guy is seeing russel on his motorcycle, cutting nick off on the road, to the point where nick, (who is driving,) has to stop short and cause his friend to spill coffee all over his lap.

When he gets into work, just moments later, nick learns that the guy who was responsible for all that hastle on the road, is their new coworker. russell bell (billy bob thornton), doesn’t seem very friendly from the start. he’s cold and quiet and reserved and nick can’t seem to figure him out. they do contests like a lit match competition where each person holds the buring match until they can’t hold it any longer. there are a lot of guys in the contest, but wouldn’t you know it, the whole thing comes down to nick vs russell and ends with russell never having to put his match out or drop it. instead, he lets it burn into his hand in order to go out.

We watch these guys compete both at work and in their social lives. at work, there is one day where both of them are trying to land as many planes as they can in a small amount of time. it’s not a set competition or anything, but you can tell that these guys are going at it against each other, each looking over their shoulder to see how the other one is doing. especially nick. when russell calls for them to give him more planes, nick insists that there is no way russell can fit any more in, and sure enough, russell finds a way to slide the planes in place, like puzzle pieces.

outside of work, there is a barbecue scene at one of the coworkers houses where russell shows up with his wife. this is mary bell played by angelina jolie in a role she seems just right for. mary bell is a heavy drinker and the kind of girl who doesn’t care a thing about what anyone thinks of her. billy bob thornton is just right for his role as well, for that matter. in real life, the two of these actors were married and used to wear viles with each other’s blood around their necks. how’s that for not caring? at the barbecue, nick and russell compete over basketball, taking as many free throws as they can before missing. nick sets a record and then russell beats it. nick challenges russell after that to take a single shot worth one hundred dollars and russell misses it and pays up.

while all of this might be entertaining, it is certainly nothing creative or original. really, we are just watching two grown men have a giant pissing contest throughout the movie, and that is something we have definitely seen before. but then things start to get a little better when one of the characters breaks a code and sleeps with the others wife. now all of a sudden there is a spark of interest in the movie that was sorely missing before.

the end of the movie is where things really fall apart. instead of continuing with the storyline about nick vs. russell, this now becomes about nick and his wife. not that the russell story was anything great, but at least it had potential. look at rushmore. movies about two guys competing can work if done correctly. but instead of going any further with that, the movie chooses to go down the route of a usual romantic comedy for its ending.

btweeen a trip nick takes to go and find russell to nick’s pursuit of his wife, and trying to get his life back, things just become silly in all kinds of ways. this movie definitely had interesting ideas, but spent way too much time in safe and routine territory. the most creative thing about the film was the jobs these guys do, and that was on screen from the moment the movie started. instead of building off of that, the movie basically threw a very ordinary plot into the environment. we get half a movie about the two guys competing and the other half about an affair that turns into one character and his wife having problems and needing to reconcile. i’m not sure what i would have preferred, but it certainly isn’t this. maybe the bomber scene at the control center could have been turned into a climax instead of this business of actually getting on planes (two different scenes of that, both in the second half of the movie.) if only the movie was a little smarter and had more of an eye on creativity than on playing it safe, this could have been something cool.