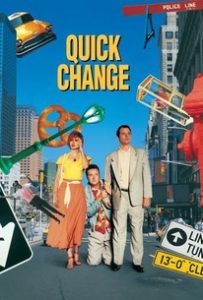 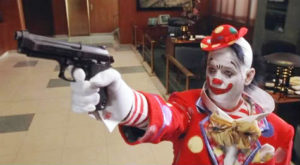 The premise is funny enough, but it’s also incredibly simple, and the longer this thing keeps going, the more it loses momentum.

This movie starts out pretty great, featuring a clown robbing a bank and all the clever ideas he has planned for escaping. Some of these include using two inside players who pose as hostages and are really on Grimm, the clown (Bill Murray’s,) side. But once the three of them successfully leave the bank and make it on the road, the craziness begins. At that point the mission is a very clear straight line to get to the airport, and then to leave the country. Only everything that can go wrong does go wrong for them, in order to prevent them from getting there. Some of it is funny and some of it isn’t. By the time the second half rolls around, the premise of keeping them from getting to the airport starts to get tiresome. And so does Randy Quaid, playing the friend who acts more like a child than an adult. The move starts out great, and overall has a pretty good premise, but it’s not enough to get us all the way to the finish line.

Quick Change is an interesting movie. The whole thing is about the results of a bank robbery. This is Dog Day Afternoon, the comedy version. The movie opens with the robbery itself, and then tells the story of the three robbers involved, and their attempts to leave New York. They expect to head right from the scene of the robbery to the airport, only things continue to go horribly wrong for them, again and again. And soon they find themselves stuck on the streets, dealing with different modes of transportation, (a cab, a bus,) just to get to the airport and catch a plane. It’s a funny formula, and kind of like the crime version of Planes, Trains, and Automobiles. And for the most part it works, although just like that classic Steve Martin – John Candy film, the formula doesn’t have enough staying power to make it all the way to the finish line, and does eventually wear out its welcome.

The movie opens with a crowded subway car, and a very unhappy looking clown sitting down, holding a bunch of balloons. This is Bill Murray’s character, Grimm, in full makeup, showing us exactly how he’s feeling with the miserable expression on his face. He gets up, when the train reaches his stop, and tries to get out of the car with all the balloons in his hand. Only he can’t, because of the people getting on and pushing him back through the doors. It’s pretty funny. And then, the clown heads to the bank.

Once at the bank, Grimm announces to everyone there that he is robbing the place, and nobody pays him any mind. It isn’t until he pulls a gun out and fires it in the air that anyone actually moves. This movie was codirected by Bill Murray, and you can tell that this is his kind of humor. We’ve seen tons of bank robberies before, but never have we seen a group of people that didn’t seem to care that the bank was being robbed, or take it seriously. When Grimm asks the teller for some money that a customer just handed over to her, and the customer complains. Grimm tells the guy not to worry because his money is ensured by the bank.At that point the customer responds that the teller didn’t give him a receipt yet, and until she gives him one, the money is not actually ensured by the bank. So Grimm now makes the teller give the man a receipt. Again, witty humor.

The smart fun continues as Grimm talks to a hostage negotiator / police detective outside, (Chief Rotzinger, played by the great Jason Robards.) And Grimm makes ridiculous demands (a monster truck,) in exchange for releasing hostages. Only the hostages that get releases end up being his friends, who are working with him on the inside. These character are Phyllis (Geena Davis), and Loomis (Randy Quaid.) Loomis acts like a paranoid nutcase from the very beginning, shouting over and over again that they’re all gonna die. When Grimm comes in and says the trouble makers will be the first ones that he kills, the people start getting especially upset with Loomis. And then as Grimm is deciding which hostage to send out, and leaving it up to the other hostages to decide, Loomis starts vomiting into a paper bag. At that moment, the hostages all point to Loomis and say him. Get this guy out of here.

Similary, Phyllis is the next one to go, because she gets on the bad side of the other hostages. She does this by telling Grimm off to his face, calling him a coward. The other hostages say that she doesn’t speak for all of them, and one even hands grim a three thousand dollar watch in exchange for letting him go. Only Grimm doesn’t. He doesn’t even just take the watch, but instead, gives the man back three hundred dollars for it, so that it’s technically not stealing. And when Phyllis calls Grimm out, and the other hostages feel threatened for their safety, they all point to her as the next one to go.

This time Grimm releases two hostages, and those people who go out are actually Phyllis and Grimm himself, (no longer dressed like a clown, of course.) So far everything has been pretty smart, including the idea of letting the hostages choose who Grimm released. This way nobody could say, “maybe you should look into that guy who Grimm releases for no reason. Maybe he was in on it with him.” Another smart move was having his two accomplices pose as hostages. This way, if there was anyone in the vault planning an escape, or an uprising, the friends would see it and be able to either do something, or at least to warn Grimm.

But now, after leaving the bank and the robbery, the real quest of the movie begins. And that quest is very simple. Get to the airport and fly out of town. The three protagonists even have flight tickets and a destination. They just need to reach the airport. And this movie pulls out all the stops with preventing them from getting there. Some are funny and some are not. The earlier moments are the ones that tend to be the funniest. For example, when the crew stops to run up and get something from Phyllis’ apartment, they leave the car parked in front of a fire hydrant. And of course, at that very moment, there is a fire outside. So the three of them watch from an apartment window as the fire department comes and slowly tears apart their car to get at the hydrant, until eventually, whatever is left of the car is just sent rolling away.

That part definitely works, but plenty of other moments don’t. These include a cab driver who doesn’t speak any English or know where he’s going, and Grimm easily tricking the mob, without knowing anything about their business, into handing over lots of money to him. The cab driver (played by Tony Shaloud,) is so bad at his job, (not only the English and directions parts, but also in actually driving,) that at one point Loomis just jumps out of the moving car, simply to get away. And this results in Loomis running, off balance, right into a pole and passing out. This is not smart comedy. Whatever was smart about it in the first half or so, is long gone by the second half.

With that in mind, the second half seems destined to keep our characters from getting to the airport in whatever ways possible. These include not being able to find their way onto the expressway because workers on the side of the road have taken down the signs (the days before GPS,) and then finding a nice guy with a map who seems willing to help, only to have him turn out to be a robber who steals their car. It’s all pretty silly. But it only really starts to get tiring in the second half, where it seems they have run out of gags to keep them from the airport, (or almost run out of them,) and so they start focussing on the characters, and don’t really have a lot to say about them.

Loomis in particular is very annoying. It turns out that bit he was pulling in the bank, saying “we’re all gonna die,” again and again, wasn’t entirely an act. That’s the real him. He pretty much acts like a kid, who the others have to take care of, (notice the picture, used for the movie cover, at the top of this review,) with him down on his knees, between the others. And Phyllis and Grimm are a couple. They have their own issues going on, and at one point even have the inevitable separation part, where you don’t know if they’ve broken up or will ever see each other again. It all feels very familiar. The premise is good, and the story works for a while, but once it reaches the second half, and they are still doing all the same things, it does start to get tiring.