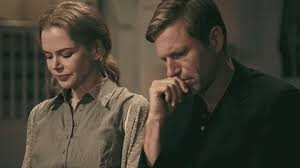 A very dark and emotional movie that is gripping and powerful every step of the way.

A fantastic movie that is incredibly dark and emotional, but really tugs at your heart. this is drama at it’s finest, with mountains of conflict surrounding a couple who lost a small child and is now dealing with the recovery from that. the movie takes place eight months after the boy’s death, as the couple is finally ready to try getting their lives back together. becca and howie are played by nicole kidman and aaron eckhart in the best performances of their careers. it helps to have such wonderfully written material to work with. this movie goes in all different directions with its multiple storylines and really explores what things might really be like for them. i love how becca and howie each get their own story outside of the relationship, how both stories are incredibly different, and how powerful nearly every scene is.

Rabbit Hole is a wonderful movie that is dark as hell. i wish i could call it a black comedy, but it’s not. this is not a funny movie at all, but more of a drama along the lines of ordinary people. it’s about two parents, Becca (Nicole Kidman) and Howie (Aaron Eckhart) dealing with the death of their young son. their boy, danny, ran into the street after his dog one day and was killed by a car. the movie takes place eight months later, when the two parents are still a wreck.

part of the reason why the film begins eight months after, instead of immediately after, is because it’s about the parents trying to get their lives back together. in the first eight months, that would be impossible to even think about, but now, it’s been a good amount of time, and it is time to start figuring things out. for example, becca still refuses to sleep with her husband, eight months later. they haven’t been intimate since danny’s death, and this is very hard for howie to deal with. he tries to make advances and to be very nice and respectful of becca, but at the same time, he needs to move forward and becca makes that very hard for him.

they also have very different mindsets when it comes to what to do with danny’s things. becca wants to give everything away. that even includes their house. she wants to move, because everything in the house and every room reminds her of danny. howie, on the other hand, wants to be reminded of danny. he wants to remember his son, and keeps things, including a video of danny on his phone. howie watches that video over and over again, until one day it gets deleted off his phone and their is an issue about how that could have happened.

there are a number of other major characters in this movie and that is a big way that this movie surpasses ordinary people, which was really about the three characters in the family and the psychiatrist (played by judd hirsch). here, becca and howie are the leads, but they are surrounded by other characters and other stories. the first one we meet is becca’s sister, izzy. she is much younger and more immature, and the first time we meet her, becca is going to prison to bail izzy out. the movie doesn’t let us know that izzy and becca are sisters for a while, and that’s an interesting move, making us wonder. i actually thought that izzy might be becca’s daughter, with the way that becca was lecturing her about being so immature.

izzy is pregnant, a revelation that doesn’t come until a solid portion into the movie, and that effects becca. she becomes angry and jealous that this great gift is going to be given to her sister when she, herself, has lost her child. becca cannot show this side of herself, ofcourse, and instead continually gives izzy advice about being a parent. she feels that her sister is much more immature than her, and if she lost a son becuase of not being careful, what will happen to her sister?

Another major character is becca and izzy’s mother, nat, played by the great diane wiest. nat has also lost a child. it was becca and izzy’s brother, who died when he was thirty from a drug overdose. nat never misses an opportunity to compare what happened to danny to what happened to her son. becca greatly resents this, and at a bowling party for her sister, ends up blowing up at her mom. her thirty year old brother was someone who got to make his own choices and was old enough to know better. danny wasn’t. nat’s point is that a mother never stops grieving for the death of her child, no matter how it happened.

becca and howie go to a support group for parents who have lost their children and befriend another couple who is also going. that couple is gabby (sandra oh), and her husband, and they have been going to the group for many years now. howie and becca, who just lost their son eight months ago, cannot even fathom being in this group for that long. becca, in particular, starts to resent the group. especially when a couple mentions god having a plan for their child when he took her, and claiming he needed another angel. becca bursts into the conversation saying, “why couldn’t he just make one? He’s god. Why did he have to take your child for his angel?” this is the first awkward group moment, and it results in becca never coming back.

howie continues to go to the group, however, on his own. that’s where he starts up a friendship with gabby that nearly turns into an affair. it’s one of those situations where any other movie would have had the two characters get locked up in an affair, with all the building blocks right there in place, only this movie takes pride in being unique. the two of them do end up smoking pot and then going to the group meeting together. this becomes the second awkward group meeting, and by the time its over, they won’t be coming back again either. instead, they go to an arcade and play games all night, which is a lot more fun to do considering what they have in their systems.

while howie has his storyline about a potential affair with gabby, becca also has a private storyline about a secret that she keeps from her husband, and a relationship with another character. becca follows a bus with a boy named jason on it. it starts with her car being next to the bus one day and her glancing up and seeing him through the window. then she starts following him and eventually meets with him. it turns out, jason is the boy who ran over her son. becca wants him to know that they don’t blame him for what happened, and jason invites becca into his world of making comic books. the one that he has made is about a rabbit hole that leads to other worlds in place and time. this brings on the idea that maybe becca’s son is out there, somewhere, in another lifetime and another world.

rabbit hole is a fantastic film because it excels on all levels. the performances by kidman and eckhart are absolutely fantastic. both of them have never been better than they are here, and i’ve followed eckhart’s career going all the way back to in the company of men. the story is loaded up with conflict and interesting scenes. there’s a great one, for example, when the couple decides to sell their house and howie stays around to show potential buyers the little ins and outs of the place. when they walk into danny’s old bedroom, the couple looking at the place ask howie how old his son is and it opens up a whole can of worms. moments like that are just fantastic. this movie really delivers and i like the way it takes it’s time to develop each storyline. the way that we don’t know izzy is becca’s sister for a while, is used again with jason and us not knowing who he is or why becca is following him. that mystery angle makes us curious and holds our attention. this is a pretty great film.