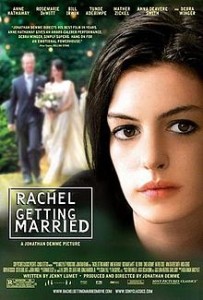 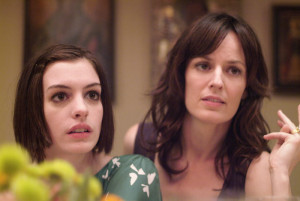 An interesting psychological film about a girl confronting her family and her past, that unfortunately spends way too much time on the wedding, the speeches, and live music performances.

Rachel Getting Married is a movie that is certainly different from the usual family drama. there aren’t a whole lot of psychological films to begin with that stay grounded in reality and focus on a main character’s disorder. that’s because movies of that nature tend to be depressing. for every good will hunting out there, which ends up being uplifting and full of hope, there are about ten ordinary peoples. now both movies are great, but ordinary people doesn’t exactly leave you with a good taste in your mouth after it’s end. Rachel Getting Married is that same kind of film.

the movie is about a girl named kym, played by Anne Hathaway, who is returning home from rehab for her sister’s wedding. kym has mental issues and has been severely depressed. she is also a former drug addict. when she arrives at home, right away she is making thoughtless comments, such as reminding her sister rachel, of a time when rachel used to make herself throw up in order to lose weight. only kym doesn’t realize what she’s saying and that these things are rude.

the first minor conflict comes when kym learns that she will not be the maid of honor. instead, rachel has chosen her best friend for the role. rachel tries to explain to kym that she didn’t even know if kym would be able to get out of rehab and make it to the wedding. but kym isn’t hearing any of it and insists that she be maid of honor. and rachel asks if that’s really what kym wants, hoping kym will say, “no, it’s okay,” kym doesn’t. and so rachel’s best friend steps down and kym takes her place.

this is a very minor problem compared with what is to come. for a while things seem okay. there is a lengthy rehearsal dinner that begins with everybody in a small room listening to speeches and singing songs. the man who rachel is marrying is apparently very musical and has links to the music world. he has tons of friends who are involved in the recording business and many of them take the rehearsal dinner as an opportunity to sing or play a song.

it takes a while to get out of that first room and into the room where they will actually eat dinner, but once we get there, we get to here the real speeches. the one that is the most interesting, of course, is kym’s. this is where our first real problem begins. kym makes a speech that is all about her. it is so painfully ridiculous that it is cringe inducing. kym’s speech talks about how she was such a bad sister and how one of her steps in rehab is to apologize, so she would like to take this opportunity to apologize for putting her sister through hell. the speech is meant to be funny, but kym sure doesn’t understand humor. and she certainly doesn’t realize that her speech is supposed to be about the couple and not about herself.

from there we go to the house for the second major conflict scene. this is where rachel lets kym have it and tells kym how terrible that speech was. she knows that everyone pities kym because of her drug problems and lets her get away with anything, but rachel is going to call her out on the selfish speech. this ends up being more than just a fight between the two girls as other members of the family get involved while they are all sitting around in the living room. especially the father, paul, played by bill irwin.

paul is a peaceful, gentle guy, and he can’t stand to see his daughters fighting and screaming at each other like this. that’s when the tables get turned on him, and rachel starts talking about how all he really cares about is kym. this is her wedding weekend, and the dad is insisting that everyone be nice and easy on kym. rachel tells kym that the only way to engage their father in a meaningful conversation is to begin it with asking about how kym is doing.

that scene is very well written and so is the one that follows it, when kym goes to her mother’s house to dig into some events from the past. this family has a deep, dark secret involving death and the reason why kym went off the deep end, and now kym wants answers about what happened. she is the one who did the act, but she wants to know why her mother allowed her to do it or put her in a position where she could do it. this is really the climactic scene of the movie with both women not holding anything back. the mother is played by debra winger, and this is her big scene in the movie.

from here kym drives away, gets into an accident, and the movie goes downhill from there. we’ve been given a lot of great, intense scene, but now it’s time to recover from all that and have a nice happy ending. all that is left is the wedding, the next day, and nothing goes wrong at that. the day begins with kym showing up with her face all battered and bruised from the accident, and her arrival is that last moment that is in any way out of the ordinary or interesting.

the wedding is pretty dull and lifeless. there’s a lot of music and dancing, but absolutely no conflict. this movie had some pretty cool things going for it, including a powerful secret that kept us wondering about it until the movie was finally ready to divulge it in detail, and plenty of scenes of conflict. the problem was that all of those conflict scenes came at the same time, one after the next. we really got all three of them in a row. and both before and after those three scenes, the movie had nothing going on. the conflict scenes should have been spaced out. the wedding stuff was pretty dull, whether it was the rehearsal dinner, the pre-rehearsal speeches, or the wedding itself. this movie felt like being at someone else’s wedding who you really didn’t care about. none of the best scenes were at the wedding at all, and so this movie should have recognized that and given us more scenes like those. during the three scenes of conflict this movie showed real promise, but everywhere else it was just kind of lifeless.