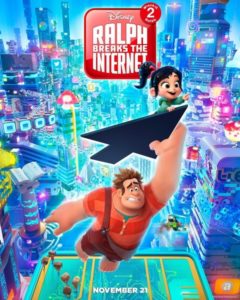 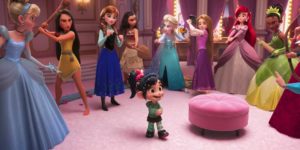 A sequel to one of the better and more inventive animated movies, this one takes the video game concepts to the internet and finds another lonely story to make it work.

Here’s a movie that takes what the first movie put out, (which was tremendous,) and builds off of it nicely. The ideas here, which include a broken steering wheel to an old arcade game and then having to go on a quest to the internet to buy a new one on EBay, are pretty solid. The jokes are strong and the references are great. Especially in the sequence where Venelopee (Sarah Silverman,) comes across a room of Disney princesses from all of the classic animated movies and has lots of clever interactions with them. But the movie does take a dark turn for the worse in its final segments. It goes places, by the end, which seem unreasonably lousy. Up until then however, and let’s say for about four-fifths of the way through, it’s a very enjoyable film.

Wreck It Ralph was one of the better Disney animated movies of the past decade. It was a movie about characters from the video game world who interacted with all sorts of Capcom characters, (such as those from Street Fighter and Sonic the Hedgehog.) And it told the story about different characters from these games leaving their game machines to enter other games that were also at the arcade. That’s how Ralph, (voiced by John C. Reilley, as a mix between Donkey Kong and Rampage,) could end up in a game called Sugar Rush, (think Candy Land meets Cruisin ’ USA.) And chaos ensued, when the King of Candy Rush turned out to be evil and needed to be dethroned.

What came out of that movie was the unlikely friendship between Ralph and Venelopee (Sarah Silverman,) the little girl hotshot racer from Candy Rush, and as a side story, the coupling of Felix from Fix It Felix,, and Calhoun (voiced by Jack McBreyer and Jane Lynch.) Well now, at the start of the sequel, Ralph Breaks the Internet, Ralph and Venelopee begin the movie as best friends, hanging out every night in all different games at the arcade. The idea from the first movie was that these characters took the game as their jobs, that they preformed for the customers (the players,) each day, but when the arcade closed at night, they were off duty and could just be themselves. This movie continues with that concept and builds on it.

The situation here is that Venelopee is bored with her game. It’s too predictable. She wins every race and doesn’t feel like she’s really being challenged. And so she tells all this to Ralph and he comes up with an idea. He goes into her game and makes a new track,  just for her. Only when she attempts to try it out, the player controlling the steering wheel thinks differently and wants to stay on the regular track. This causes Venelopee to override player control and leads to the steering wheel breaking. Another movie might have now put Venelopee on trial with the characters of the video game world for breaking a fundamental rule, overriding player control. This movie has better ideas than that. It takes our characters to the internet to try to buy a new steering wheel on EBay.

What’s great is that all of this comes from Ralph and Venelopee overhearing the conversations of kids at the arcade. When the steering wheel breaks, the kids go to the arcade owner and ask him to get a new one. He tells them the company that makes this game is no longer in business. At that point, they get their phones out and check the internet. They find the wheel for sale on EBay. Only problem is, it costs so much that the arcade owner can’t afford it. And so Ralph and Venelopee go to the internet, (via the arcade owners new router and Wifi. And that’s where the real quest of this movie begins.

Once they arrive at the internet, and are surrounded by all kinds of advertisements for Amazon, IMDB, and sites like that, the two of them go right to EBay. Once there, they bid on the steering wheel, thinking the idea of an auction is to just say a number higher than everyone else’s. This leads them into a situation where they are stuck with a set price that they have committed to, and now must find a way to get that amount of money or else find themselves banned from EBay all together. And so the mission changes. First it was to make Candy Rush more fun for Venelopee, then to get the wheel, and now it has become about getting the money. And all of this is great. Having the mission keep changing keeps things interesting, as long as one mission really leads logically into the next. In this movie, each one does.

And so, with our characters in dire need of lots and lots of money, they turn to spam and find a guy who will offer them money for stealing a car. This leads them into another game, where they find the prize-worthy car, boost it, and then find that they have stolen from a big shot racer and doesn’t take getting robbed by them easily. This is Shank, voiced by Gal Gadot, and she does whatever it take to get her car back. But despite winning, she has to admire Venelopee’s raving skills, and the two share compliments with each other.

At this point, Ralph and Venelopee go their separate ways. That’s where the movie starts to fall apart a little. There’s no reason for them to separate, other than the movie falls for it. What that means is that it doesn’t logically fit the story, but it’s designed to help the filmmakers hit the points, coming down the line, that they want to hit. Ralph turns to making videos that go viral and using them to get money. Venelopee turns to spamming people with pop ups.

And then things get worse. When Ralph overhears Venelopee talking about how she likes  Shank’s game more then Candy Rush and wants to stay there, he decides to destroy this new game that Venelopee has sound. In order to do that, he needs to travel underground to find a shady charter who can help him start a virus. This shady character has a mole of sorts on his neck, that looks like a second head. Which of course leads to tons of mole and goiter jokes. We’ve seen this gag again and again in movies like Wayne’s World and Austin Powers. Maybe the idea is that kids who are watching this new Wreck It Ralph movie probably aren’t familiar with those other films, but for the rest of us, it’s old and uninspired stuff.

And Ralph’s goal of destroying Venelopee’s game is pretty ridiculous. It’s hard to believe that he doesn’t realize this might lead to his best friend  getting hurt. Especially since when he tried to just create a new track in Candy Rush, at the start of the film, it led to problems. Everything about Ralph creating a virus in Venelopee’s new game is terribly out of character. He basically becomes a villain here, as much as the movie wants to pretend he just makes a mistake. Pretty big mistake, putting your best friend in harms way and seeking it out. And so the virus forms on Venelopee because of her glitch, duplicating her all over the game. Then it duplicates Ralph, and suddenly we’ve got giant Ralph monsters all over the place.

Aside from that very dark and out of place turn that the movie takes in its final act, this is a pretty good film. Most of the story is clever, including the different places they come across while traveling the internet. The highlight of the film has got to be the Disney Princess scenes. When Venelopee visits a website called “Oh My Disney,” she runs into characters that Disney now owns (from Marvel and Star Wars,) and also a room full of Disney princesses. Only, these are the princesses after a makeover from the Me Too movement. They are awakened in a way where they talk about and make fun of their commonalities such as not having a mother figure, having an overbearing father, and having every one of their accomplishments get attributed to a man. The sequence is great, not just for the strong female – Times Up ideas, but also because of the way each Princess gets to make jokes about her character and movie. So many great references here. Lots of fan service, and all of it well-done. That might be the highlight, but overall this is a very good film. If only it wasn’t for that out of control, and out of character, ending.