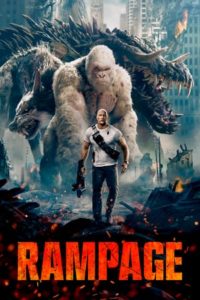 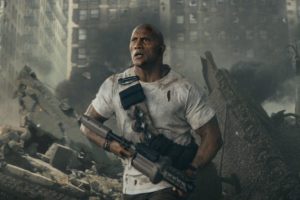 A pretty lousy action movie that doesn’t really deliver in any of the areas one might have hoped for.

A mess of a movie, this one is based on the fantastic 80s arcade game where giant monsters attacked tall buildings, but the movie can’t hold a stick to the game. The game did something very smart by having players go inside the bodies of the monsters and become the bad guys. The movie goes the usual route of giving us a human protagonist to relate to. This protagonist is played by the Rock, and there’s not a whole lot that either he or his charm can do for this one. If somehow there were a way to transport a character into the body of one of these beasts, like the game did, it might have been pretty cool, (then again, isn’t that exactly what Jumanji, also starring the Rock, did earlier this year?) The story is beyond weak with two ridiculous villains in the form of a brother and sister team. And the monsters don’t even look good. The action, which should be amazing, is really just routine. We are used to over the top computer effects by now. You have to gibe us something more. Rampage never really does.

There isn’t much to like about the new movie, Rampage, other than the source material it is based on. Rampage was an arcade video game in the mid-eighties, where players could be one of these giant mutant monster characters, destroying skyscrapers while smashing everything in sight. The humans were the bad guys, in the game, and players were the ones doing the damage. It was a pretty cool twist. And with just one of these giant creatures, it wouldn’t have been anything special, but the fact that players got to choose between three of them made it pretty cool. And so when word was announced, a few years back, that the Rock was making a movie bases on the classic 80s arcade game, the general consensus, (from anyone familiar with the game,) was that this sounded pretty cool. It’s a nostalgia thing, just like if we heard that the Rock was making a movie based on the game Contra (and don’t think it won’t happen, after all the Rock is also the guy who gave us the movie Doom, a few years back, based on the game.)

So clearly the Rock is a gamer in his spare time, and is pretty nostalgic about what some of the great games have been, (it would be awesome to see him pop-up in a Mortal Kombat movie, whenever they get around to rebooting that one.) But that doesn’t mean anything in terms of what the movie is or how it turned  out. He’s also a fun actor when it comes to big budget, B movies. The Rock is the guy who got nicknamed “franchise viagra,” a few years back because of the way he would come into a franchise and breathe new life into it, completely reinvigorating projects. He did it for the GI Joe movies and he most definitely did it for the Fast and the Furious series. But with his own original movies, it’s a whole different ballpark.

Over the past few years, the Rock has been in anything he can get his hands on. This guy seems to never stop working, and that includes a TV show on HBO called Ballers. With movie, he is attached to as many projects as possible, including lots of remakes, like a possible upcoming Big Trouble in Little China remake. Over the past few years, he has starred in mutiple team-up films with Kevin Hart, including Jumanji and Central Intelligence. He starred in a Baywatch film as well as a terrorist action movie called Skyscraper, and another action movie about a natural disaster, called San Andreas. This guy just keeps on going. And the problem with that is that as much fun as the Rock is, when you don’t take the time to carefully choose your projects, and just try to get your hand into everything you can, many of the movies don’t come out as good as they should have.

And so we’ve got the movie Rampage, directed by the same guy who directed The Rock in San Andreas. That movie was a hell of a lot better than this one. It was flawed and forgettable, but it was still fun in the moment, while you were watching it. He also directed the Rock in Journey 2 The Mysterious Island, a movie that supposedly was a lot of fun. But Rampage most certainly is not. This movie is built on such a thin concept that they have to scrounge together a bunch of ridiculous pieces, just to have something that can resemble a plot. And so we’ve got a mischievous company that deals with animals and experiments and hired a scientist, Dr. Kate Caldwell, (played by Naomi Harris,) to find out what happens when you mix around the DNA in different animals and play with their sizes and abilities.

Caldwell was fired from the company, which is run by the evil siblings, Claire and Brett Wyden , (Malin Akerman and Jake Lacy.) She was fired when she found out what her experiments were being used for and objected to it. And with her out of the picture, the Wydens took Caldwell’s findings and sent them up to space, where the experiments could be done with no one to monitor them. None of this, of course, makes any sense. But what it does do is it gives us a cool opening scene on a space shuttle with an astronaut trying to get off the shuttle and into an escape pod before the whole thing blows up. And all the while she’s floating through corridors while trying to avoid dead bodies and a giant monster rat. It’s a great opening scene that reminds me of the early satellite scene in Call of Duty: Ghosts, (and considering how much the Rock likes video games, it wouldn’t surprise me if the ideas was taken from there.

The experiment in space goes wrong, the astronaut has to evacuate, and the pieces and particles from the experiment go flying down toward planet earth. That’s where they come in contact with a wolf, an alligator, and George, the friends albino ape. George is best friends with Davis, (The Rock.) At the start of the film, we see Davis bring some young arrogant characters (especially the guy,) through the forest. That’s when George attacks them. Turns out he’s just messing around, and this helps establish Davis’ relationship with the guy, the two of them joking around with each other, and George even giving Davis the finer.

But the next morning, after having come in contact with the substance, George has grown substantially bigger. He has also killed a grizzly bear. And people are scared. They have him locked up in a special kind of cage (still at the zoo,) until they can figure things out a little more. Only the cage doesn’t hold George for very long. He breaks out of there, and so they put him on a plane, in another cage. He breaks out of that one too.

The reason for George going nuts on everyone and breaking out of all these cages (especially the one on the plane,) is because the Wyden siblings have a device which creates a signal that calls to the monsters. It’s a sound that they can’t handle and it makes the monsters want to come towards it, and destroy it. And so George and the other two creatures all start heading to the same place, a tall building in the middle of the city of Chicago.

While the sibling villains are pretty weak, and might actually be the worst part of the movie, there are some other semi-villainous characters that are more fun and more interesting. There’s one great hunter and marine, played by Joe Magniello. He goes after the wolf monster. The only problem that his scenes are so short lived. It might have been nice to see a little more of this character. But the other one is Harvey Russell, played by The Walking Dead’s Jeffrey Dean Morgan. He is a top government man, running the operation of transporting George in the plane. And when that falls apart and Davis saves his life, Russell has a sort of awakening, and suddenly isn’t such a scumbag anymore. His character is probably the most interesting one in the movie.

The big problem with this movie is the action. Obviously with this premise, it’s all going to look fake, but you still hope for something kind of fun. After all, San Andreas looked fake, but we didn’t really care because the thrills and excitement were there. But with giant beasts, this movie is in a territory that can be very tricky. Kong: Skull Island got it right, by not overdoing it with the monsters, and mostly keeping them hidden for surprise attacks. It also used it’s landscape and playing field to its advantage. Rampage does neither one. It has Davis flying around in a helicopter, while these giant monsters are knocking over a building, even though he knows full well that they can just grab his chopper out of the sky, like they have already done with many others. The coolest part of this movie is a blink and you missed it Easter Egg, where you see the Rampage Arcade Game in the background of the sibling’s office. It is out of focus, and you can just barely make out the words. When an out of focus image is the best part of the movie, you know there are problems.