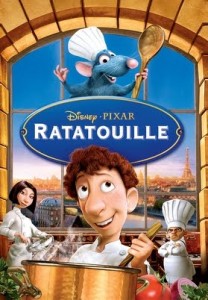 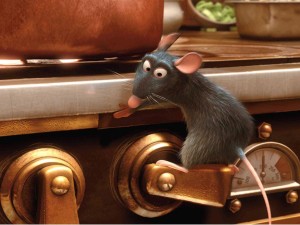 A fun and creative movie a rat who helps a guy learn to become a Paris chef.

Ratatouille might not be as funny as some of the other cg animated movies around today, or as action packed, but it certainly has most of them beat when it comes to creativity. like Wall-E, which pixar (the same studio), put out one year after this, Ratatouille is something different. the movie goes above and beyond when it comes to plot, giving us two main characters, and a fun little story about how they come together and join forces in the kitchen of a top scale restaurant. One of them is human, and the other, of course, is a rat.

the movie begins long before we meet the human chef, enter paris, or find ourselves in the restaurant. it begins with the rat and his family. this is no ordinary rat, but a very special one, named remy (voiced nicely by patton oswald), who has an amazing sense of smell. remy loves food, and is disgusted that his family members eat whatever garbage they can find. remy appreciates great flavors and combinations. he reads cookbooks and sneaks into an old woman’s kitchen to try different tastes out.

the movie does a wonderful job of showing the way remy appreciates different taste sensations. when he eats something delicious, the screen goes black all around him and then firework-like swirls go sliding through the air and eventually exploding. remy talks about different taste combinations and what would go perfectly with a mushroom he found. he gets up on the roof just to roast the mushroom over a flame and give it a smokey taste.

remy’s voice over narration goes a long way at the start of this movie to explaining his appreciation for flavors and cooking and perspective on the way other rats eat. and then we get a big event when remy sneaks into the old woman;s kitchen with his brother and she catches them. a chase leads to open-season in the woman’s kitchen with her popping off a shotgun in all directions, wearing a gas mask. soon the rats are on the run, our the window, out the door, and into the sewer.

that’s where remy gets separated from his family. there are hints of pfeiffel the mouse here, the main character from the animated film, an american tail. in that movie, the character was a mouse, (not far off from a rat), and also got separated from his family at the start of the film. but the similarities stop there. that’s because whereas that movie was all about pfeiffel finding his family and getting back to them, in this one remy takes the separation as an opportunity to explore.

he gets into the streets of paris and has a jiminy cricket sort of conscience character, in the spirit of the recently deceased chef gustau. this chef was the author of a famous cookbook titled, “anyone can cook,” and he also owned a world famous restaurant called “gusteau’s.” and just as remy is making it into his kitchen for the first time, another man is too. this man is linguini, who is looking for a job at the restaurant, and due to some former connections he had with gusteau, is able to get one.

the movie becomes about how remy teaches linguini to cook. but it’s actually a lot more creative than that. if linguini was just learning to do it himself, it would be the usual sort of thing. but what’s special here is that remy and linguini work out a system, whereby remy stays on linguini’s head, underneath his chef’s hat, and pulls his hair in certain ways that make linguinin move like a marionette puppet.

together the two of them make masterful dishes and linguini finds himself being promoted from garbage boy to chef. but there is more at stake here. much more. for one thing, the connection between linguini and gusteau is more like a secret that linguini doesn’t even know about. but the evil head chef of the kitchen sure does and is determined to keep it a secret.

another problem is the idea of having a rat in the kitchen. any other movie would have tried to ignore this and not make the audience think about it, but Ratatouille goes at the problem head on. in fact, the entire end portion of the film is about that situation and how certain characters react to it.

this movie has a ton going on. it has remy and his family issues. it has linguini and his family secrets. it has the partnership and friendship between the two of them. and then there’s the romance between linguini and the female chef of the kitchen, as well as the head chef who is determined to have linguini’s secrets exposed. there’s even a fantastically eccentric food critic named egor, voiced brilliantly by peter o’toole. there are plenty of chases and exciting moments throughout the film, but the heart of this movie is it’s story and it certainly comes up with something lively and fresh here.