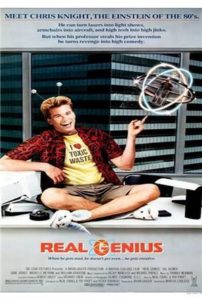 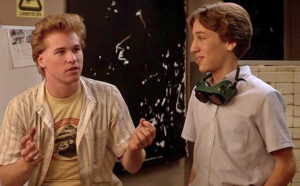 An okay 80s movie about a school for geniuses where their project is, unbeknownst to them, really being used for a secret government weapon.

This is a clear 80s movie, that doesn’t exactly hold up today. When looking at it by keeping in mind the time when it came out, the movie is okay. Most 80s movies have a unique feel to them (that was the last decade that really had a specific style, including strange colors, outfits, and music.) This movie doesn’t go for any of that, but it does capture the kids taking on the world mentality that existed back then, coming from movies like War-games. Here, there’s a school full of genius high school kids who have been recruited by a professor who is secretly working for the government, using the experiments of these kids to perfect government satellite lasers and weapons. The storyline is so far fetched that it’s pretty ridiculous, but there are some nice touches that add to the plot, such as a man who really does live in the closet of one of the dorm rooms. Val Kilmer is on hand here as the costar and comedic relief, and in the first half of the movie, he’s pretty funny. But in the second half, he gets serious and the movie goes way too far with it’s storyline. That’s where this film really drops the ball. The first half is far better than the second half.

Real Genius is one of those 80s movies where everything is just a little too simple and obvious. The premise feels right out of Wargames, (which was made two years before this movie,) about a school for genius teenagers who think they are just doing experiments and inventing lasers, but are unknowingly having their projects be used for secret government weapons. The movie tells us this from the start, opening with a war room like meeting where government officials are watching a video that demonstrates the capabilities of one of these weapons. It’s kind of like an advertisement, the way that Scrooged opens with an advertisement about all of the networks upcoming Christmas shows, and the movie Network shows us a bunch of fake shows (something that was clearly a trademark of seventies and eighties movies.) This one shows off the weapon as it fires from a satellite in space and find it’s target, a man at a barbecue, down on earth, who is immediately obliterated by the laser. And like those other movies, this is played for comedy, as the man standing in front of him turns around to find there is nothing left of his friend.

It’s an entertaining way to open the movie. Granted the effects look incredibly fake, but that’s a given, considering the time when this movie was made. Still, it gets our attention and makes us want to know how this will tie into the overall plot. From here we move to a science fair, where a man named Jerry Hathaway (William Atherton, who played some of the greatest scumbags in film, from his recurring roles in the Ghostbusters movies to the Die Hard movies,) is walking around looking at projects. Jerry is the man who is in charge of the institute where this movie will primarily take place, and he’s also the connection to the government agents. He secretly turns over the work done by the kids he has at the school, to the government, for a large sum of money.

Going back to the idea that this movie is a little too simple and too obvious, Jerry is the perfect example of that. He’s one of two villains in this movie, (the other one being a student named Kent,) and both villains are clearly awful people who are over the top. It’s a bad guy cliche that bad guys are mean to old people and dogs, (something I learned from the Kevin Costner movie Tin Cup.) Well, this movie has that in spades. Jerry is mean to anyone he comes across who cannot help him with the laser project. That includes the construction workers who are rebuilding his home, (using the money he has received from a grant that was supposed to go to the school,) and, of course, their dog.)

But before we learn that Jerry is a bad guy, he’s walking around looking at projects, but is really there to see Mitch Taylor, (Gabriel Jarret.) This kid is so young, (maybe around 14,) and yet so smart, that Jerry just has to work with him. And so Jerry, (who is also a celebrity, hosting his own TV show,) invites Mitch to come to the school and be a part of the projects and experiments that they are doing there. Mitch is thrilled with the idea, and he mentions that he has read all about Chris Knight, (Val Kilmer,) the only other high school kid who Jerry has recruited at such a young age.

When he gets to the school, Mitch meets Chris, who is now about two years older, and a senior at the school. Now, here’s a question. All of the other kids at the school also look about the same age. Maybe they are one year older than Mitch. But Chris is the only senior, so is it just that Mitch is the youngest Jerry has ever recruited, (other than Chris,) and that all these other kids are only a year or two older than him? It just makes the age thing not quite as special. But it’s never exactly explained, how old Mitch is compared to the other kids there. This movie wants to avoid details whenever it can, and just expects us to go along with everything, (the way that many movies from the eighties did.)

Mitch is thrilled to learn that he won’t just be working with Chris, but also forming with him, as the two of them are assigned to be roommates. Now, considering Chris’ cynical and rebellious attitude about the school, don’t you think that Jerry as well as anyone who gave it more than a thought, would realize this is a bad idea? Wouldn’t you want the person who was rooming with Chris to be someone who would influence him in a positive direction? But for the entertainment value of the movie, they make Chris his roommate, and that entertainment comes from Chris, who is a class clown. Everything about this guy, in the first half of the movie, is a joke. He’s a party animal, and it’s hard to believe that he’s the genius science student that we’ve been hearing about.

Aside from Chris not being what he expected, Mitch also gets another surprise in his room. There is a man living in his closet. At first, he thinks he’s just dreaming it, or is half asleep and just imagining the situation. A man walks into his room, goes into the closet, and then disappears. Mitch chases after the man, but when he opens the closet, there is nothing but a bunch of hanging shits. He later learns the truth about this man, and what it has to do with the school and their government secrets. It’s a pretty cool reveal and way of bringing the real story into focus for Mitch to find out about. It’s also a really strange and creative idea, and the movie gets a lot out of it.

The first half of this movie is definitely better than the second half. In the first half, we get all of the humor of the Chris character. This includes him turning the floor of a dorm hallway into ice and then sliding around it. It also includes him throwing a party where he makes a pool in the middle of the auditorium and invites a bunch of female students from a nearby beautician school. The first half Is also where Kent shows himself to be an antagonist, trying to catch Mitch and Chris in anything they do that is against school rules. It is Kent who is upset about the ice hallway, and it is him who brings the pool party to the attention of Jerry.

Kent goes from teacher pet to major villain when he records a private phone conversation that Mitch has with his mother, while Mitch is crying and talking about how much he hates the school. Then Kent and his two buddies play the conversation over the loud speaker at the school, which Mitch is sitting in the cafeteria eating. It’s one of those Heathers or Mean Girls like stunts, where the victim is surrounded by other students who start laughing and pointing. Unfortunately, Mitch’s vengeance, involving a car that is being pumped up and down, isn’t nearly as memorable.

While the first half of the movie had some pretty good ideas at times, the second half is far less interesting. This is where the story is supposed to get more exciting, and I suppose the people behind this movie thought it was, since this is where the laser project really comes in. But it’s just routine material as the kids lean what their project is being used for and set out to sabotage it in a way that it can no longer be used by the government. Their final “prank,” is a little too ridiculous, and also not enough punishment on Jerry for all that he has done. If this movie were made today, it would end with Jerry getting taken away in handcuffs. But here, it goes for humor and silliness instead. It doesn’t work. The first half of this movie, is okay. I would hesitate to call it anything great, but it is far better than the second half. Let’s put it this way, in the second half, our heroes wear fake mustaches and go sneaking around government labs. It’s that kind of dopey. The movie, as a whole, is okay. It is definitely representative of the eighties as a much simpler and sillier time.