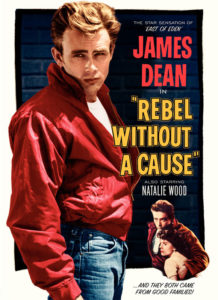 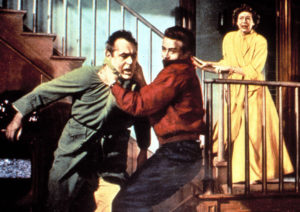 A fantastic movie about teenage psychological problems and finding solace in other teenagers who are also dealing with issues at home.

This is a fantastic movie about teenagers trying to navigate their personal lives and their home lives at the same time, and watching the two of them conflict with each other. There are three main characters here, and each one is dealing with a very different situation at home. The one similarity is that all three are having a tough time with their parents and are looking for a means to escape. When the characters run into each other at school, things build to a tension level that leads the protagonist, Jim Stark, (James Dead,) to feel the need to prove himself to the other kids. That’s what puts him into a dangerous and deadly race off the side of a cliff. And while scenes like this are exciting, it’s the scenes between Jim and his parents that are the real heart of the film, because they explain why he is so upset and how he turned out the way he is, (unable to let anyone call him a chicken, without challenging them to a fight.) The three friends find solace in each other, and form their own version of a family, away from their homes. But they’ve got enemies who are coming for them, and the balance between this story, and that of their homeliness with the their parents, makes for a pretty entertaining film.

Rebel Without A Cause is a genuine masterpiece. This is a movie that really gets at the heart of what it’s like to be a teenager and be dealing with issues that adults just can’t seem to understand. It’s a movie about three different kids who each have their own problems with their parents, and act out because of them. The three kids all have very different issues at home, and yet the ways they handle and respond to these issues are pretty similar. And the result of their behavior, and acting out, winds them all up in jail for the opening sequence, which is where we meet all three of them at the same time.

The movie begins with Jim Stark, (James Dean,) lying on his stomach in the street, drunk and playing with a toy monkey. He puts the monkey to sleep, like a parent would a child. The scene tells us that Jim is still a little kid at heart, (playing with a toy,) but wishes he had someone to look out for him, and be responsible for him, the way he is for the monkey. His problem is that his parents keep moving him away, from town to town, every time he gets into trouble. And he keeps getting into trouble, because whenever he’s challenged to fight, he accepts, refusing to let people call him a chicken.

The reason for that goes back to his parents. Jim’s dad is a pushover who does whatever his mom wants, or orders him to do. She pushes him around and the dad is just fine with that. But Jim isn’t. He lives in a house with overbearing women, (not just his mom, but also his grandmother, who we meet at this police station scene too.) And Jim wants his dad to stand up to them. Especially his mom. He loves his dad, and even offers him a seat, when his dad comes to see him at the station. Jim calls his dad, “the king of the ball,” and laughs and plays around with the man. But when he sees the way his father interacts with his mother, looking at them through a peephole in the door, Jim falls apart.

Meanwhile, also at the station, there are two other kids who have been brought in. Judy, (Natalie Wood,) and Plato, (Sal Mineo.) Judy is there because she was picked up for wandering the streets at night. She is really there to get her father’s attention. Her situation is the most ambiguous. We know that she has a bad relationship with her father, where they used to be close, and now that she has come of an age where she is attractive to men, he wants nothing to do with her. She tells the story of how one time when she put on lipstick, her dad came over to her, called her a tramp, and violently rubbed the lipstick off her lips. Judy doesn’t know what happened to her father, but she wants desperately to go back to the way things were. The movie’s one flaw is that it doesn’t address this situation enough, getting at the heart of what’s going on between them. Is the father attracted to his daughter? Maybe it was brave of this film, for the time, to even hint at such a thing, but we never get any answers or resolution to this story.

The third teenager at the station is Plato, and he’s the most messed up of the three of them. Plato is there because he shot and killed some puppies. His situation is that he comes from a well-off family where his father has left them, and his mother is never around. Instead, she’s always off traveling the world, leaving her son at home with the nanny. This nanny arrives at the station and tells the police officer that today is Plato’s birthday. While his unpleasant home situation is pretty clear and understandable, killing puppies is a way too extreme action. It’s a strange and uncomfortable way for this movie to introduce a character with, and then expect us to sympathize with him. A better idea would have been if Plato was shooting at the puppies, just to scare them. But other than this, Plato is a pretty great character, afraid of the world and feeling like he has nobody to take care of and watch over him.

Jim takes to Plato right away, seeing that the boy is cold at the police station and going over to offer Plato his coat. The next day, at school, Jim and Plato meet again. It’s Jim’s first day at a new school, and when he steps out his front door for the morning drive to school, he meets Judy, who is being picked up by her hoodlum friends. Then he gets to school, sees Plato again, and finds out about a school field trip, happening that day, to the nearby planetarium. Jim gets in his car and takes off. Once at the planetarium, the movie takes some time with the show, as the speaker talks about the different constellations in the sky, and how the future is uncertain. Our world might end with the earth being crushed with absolute destruction. This is a weird message, but it works on different levels. On the one hand, it is the speaker trying to relate to the kids and get their attention. On the other, it is a metaphor for the idea that a ball of destruction is headed the way of the kids if they don’t wise up fast and change their ways. And they don’t. It is definitely meaningful that the character who has the hardest time with this message is Plato, who Jim finds after the show, hiding under his seat. Plato is the weak character of the movie. He’s the child in need of a guardian’s and direction.

When the show ends, Jim goes outside to see Buzz, (Judy’s boyfriend,) and his gang of friends, (which includes a young Dennis Hopper,) sitting on top of Jim’s car. They want a fight and do all the right things to get one, starting with slashing his tires. When Jim gets down to where they are, Buzz challenges him to a knife fight and calls him chicken. That’s exactly the right button to push for Jim, and the two of them go at it, slashing and cutting each other. When security puts an end to the knife fight, a new challenge is issued. A chickie run. That means the two of them will get in stolen cars, drive them straight at the edge of cliffs, and jump out before the cars go over. Whoever jumps first is a chicken.

This takes place in the evening, but first, Jim goes home to have a word with his father. The scenes between Jim and his parents are some of the best in the movie. In this instance, Jim wants some advice from his father about whether or not he should go. His father tells him that nobody can make a quick decision about a thing like that, and tries to sit down with Jim to write out a list of pros and cons. It’s exactly the kind of thing Jim doesn’t want to hear, and so he takes off and heads to the race. Once there, we get a very exciting drag race scene that ends in destruction and death.

And now the characters are left crushed by the events of the evening. Especially Jim and Judy. They find solace in each other, when Jim is driving the streets and finds Judy wandering around by herself outside. Together they go to an abandoned mansion, where Plato meets up with them and the crew plays house. Jim and Judy act like a couple touring the mansion and Plato pretends to show them around. But pretty soon, their fun is cut short by Buzz’s friends. They show up and come after our protagonists and it leads to the climax of the film.

Rebel Wihtout A Cause works on many different levels. Even the ending, where the kids unite to form their own version of a family, is pretty creative. Especially considering the home lives that each one of them is running away from. There are some flaws to the movie, most likely due to when it came out, and what audiences thought about back then, versus think about now. So, for example, Judy gets over the death of her boyfriend way too quickly, and the issue between her and her father is never concluded. But most of the storylines work, and even the ones that are incomplete are still pretty interesting.For James Dean, this is is finest film, (he only made three in total,) and it’s a masterpiece that for the most part still holds up today.