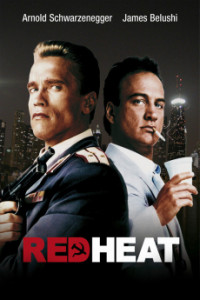 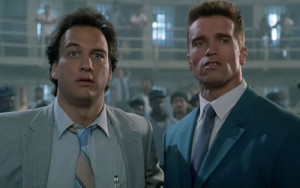 An okay cop movie that is good for some laughs and some decent action scenes, but is also kind of forgettable.

Not a bad movie, but also completely forgettable considering the other films in the genre that were out at pretty much the same time. This movie is really just another entry into the buddy cop genre, and it came out in the eighties, when that genre was at its height. 48 Hours, Lethal Weapon, and Beverly Hills Cop, (not a buddy cop movie, but still,) are the real contenders there, and the Rush Hour films are the modern version of all those movies, but Red Heat is a pretty decent entry. It’s got Jim Belushi working the comedy an Schwartzenegger as the serious, almost robot-like Russian. The action scenes in the movie are okay, but the story is a little too predictable and similar to the other films in the genre.

Red Heat is a movie that comes from the time when the buddy cop movie was the big money making genre. This genre to the eighties was like what superhero movies are to today. So you had 48 Hours, Lethal Weapon, Stakeout, Tango and Cash, and this movie. In the nineties all of this started to die down when one single franchise took over the genre. Rush Hour. The very same year that the Lethal Weapon series ended, with Lethal Weapon 4, the first Rush Hour movie came out. Now the Lethal Weapon movies were the most successful of them all, and even that ran out of fuel and reached a point where it was dated and past its time.

The point of all this is that while Red Heat must have been a pretty notable movie back when it came out in 1988, today it is really just the usual run of the mill cop film from that time period. And it would be hard to find someone who would be looking for a movie from this genre and this time and choose this film over Beverly Hills Cop or Lethal Weapon. Still, the movie does hold up as a decent film, just not a very memorable or unique one.

The movie stars Arnold Schwartzenegger at the time when he was pretty much at his biggest. When you look at his most classic films, nearly all of them had just come out right before this  one. The Terminator, Conan The Barbarian, Predator, Commando, and The Running Man. So Arnold was the name on everyones tongue, just like Sylvester Stallone was because of the Rocky and Rambo movies, (and Stallone’s entry into the buddy cop movie genre was Tango and Cash.) For Arnold, he’s basically playing a robot or cyborg here, in the sense that he is all serious, talks in a monotone, almost robotic way, and is clearly pumped up like a machine. You can see why the Terminator role was perfect for him.

Schwartzenegger is playing a Russian character named Ivan Danko. It’s a name that sounds pretty familiar to the villain in Rocky IV, which came out a few years earlier, Ivan Drago. In Red Heat, Danko starts the movie in a Russian bath house, fighting it out with multiple gangsters in the building, throwing them out the window, and into the side of the snow covered mountain, where the fighting continues. After this, there is another action scene in a bar where Danko knows exactly where to look for some hidden drugs…inside a man’s wooden leg. And then there is a chase in the streets with the villain of the movie, Victor, pulling a gun out of his wrist, Desperado-style, and cutting down Danko’s partner.

All of this leads to Victor getting away, fleeing to America where he has a drug connection, and to Danko having to fly to the states to go after him. That brings us to Art Ridzik, (Jim Belushi.) He’s the comic relief of this movie, and while he can’t hold a candle to Eddie Murphy or Chris Tucker, he’s also not half bad here. When we first meet him, it’s during a stakeout with two other, more serious cops in the car, and he can’t stop talking about the size of a girl’s boobs and whether or not they are real. We’re not talking about very sophisticated humor here, but he puts in the effort, nonetheless.

There’s a shooutout introduction to this character, much the same as how we met Danko over in Russia during a series of action scenes. And then Danko arrives in the states and he and Ridzik are put together. Danko has been warned by his government to not tell the Americans anything about Victor because it can be very embarrassing to their country. And so he doesn’t, even when the local police have captured Victor and are holding him in a cell. They bring him to a train station, and that’s where the escape happens.

It’s unfortunate that this is all done in such a predictable way that you can see it coming a mile ahead of time. It’s still early in the movie and the main villain has been captured. Unless this movie is going to spin one villain into another, like Batman Begins or something, (from Carmine Falcone to The Scarecrow to Ra’s Al Ghul,) you just know that this villain, Victor, is going to escape. And that’s exactly what happens. Now the real movie, of these two cops working together, begins.

They put together a few leads and interview a number of suspects, including a black prisoner who is blind, yet seems to be running the drug trade, and Gina Gershon, who claims she is Victor’s wife. When the two cops go to a hospital to question one of the men who was working with Victor, there is a nurse there, murdering the man by injecting his IV with poison and turning off the heartbeat alarms. This turns into an interesting shootout through the halls of the hospital.

There’s another shooutout in the hotel where Victor once rented a room and Danko is now staying. With all of this going on, there are a number of action scenes, but very few of them seem like anything special. The only reason the hospital scene stands out is because of the nurse, and who she turns out to be. And Victor and the cops have quite a lot of run-ins throughout the film, constantly crossing paths. This is both good and bad. On the positive side, it’s a lot more exciting than a movie where the hero and villain only meet at the beginning and end, with the whole middle of the film being simply filler. On the other hand, all of the run-ins make it seem like the movie is kind of out of ideas, and so it just keeps throwing these characters together, again and again.

Red Heat is a fine movie, but it is also completely forgettable. There’s not a whole lot that this movie does to make it stand out and separate it from any of the others. I suppose the one key difference is that in this film, one of the two cops is from another country, and new to America. That leads to a lot of jokes about the cultural differences. This sort of thing all reappeared, of course, with the Rush Hour movies, which took it to the next level, not only featuring Jackie Chan, coming to American from China, but also motormouthed Chris Tucker in one of those roles he was perfect for, (Friday is the other one.) Schwartzenegger and Belushi are both pretty good in Red Heat, but its the story that is just a little too simple, predictable, and similar to all of the other films in this genre that were being made at exactly the same time.