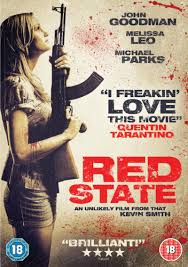 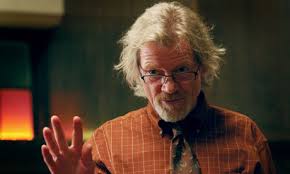 A pretty freaky, pretty scary movie that isn’t very feel good or enjoyable, but definitely keeps your interest and attention.

Kevin Smith finally learns how to direct a movie! That is absolutely the best thing about Red State. There are a lot of interesting Points to be made and things to say about this movie, but by far the best is that it is directed like a real movie and that the director is Kevin Smith. I suppose the problem with Kevin Smith, as a director has always been that all of his movies are the same. Now I was a big champion of his first three films, Clerks, Mallrats, and Chasing Amy. but after a while, you’ve got to realize that he’s just making the same movie again and again. or trying to. and since making those first three, everything he’s put his hands to has come out about a thousand times worse.

he is a director of comedies who is not very funny. and neither are his movies. Take Dogma, for example, with its monster made of poop and it’s two guys (Jay and Silent Bob) who talk about nothing besides sex. it’s just dumb. At least Chasing Amy (Smith’s best film) had a real premise. Well, with Red State, for the first time, Smith is not making a comedy. he’s making a horror movie / action picture and he directs it like a real movie. The film is artistic and well shot and for the first time, Kevin Smith shows that he is actually talented.

the movie is about three teenagers out in redneck territory (somewhere in the south), who find an add online for a woman who is interested in sleeping with them. she actually wants to do all three of them at the same time, and these guys are very interested.

The boy’s head out to the woman’s trailer, talking about how they’re going to do her and what their ideas are. at one Point on the road, they get so excited and careless that their car sideswipes a parked car. and in that parked car one man is going down on another man. And one of those two guys is the sheriff of the town, played by Stephen Root.

When the guys arrive at the trailer home of the woman (Melissa Leo), she gives them all a few beers and then tells them to go in the back room and strip. Now one thing that I don’t really get is that this woman is old and disgusting (no offense, Melissa Leo), and they are young teenagers, and yet this is the woman they are excited about sleeping with. why not use an attractive younger woman, the way that hostel did?

as it happens, the whole things turns out to be a trap. the beers are drugged, and the boys wake up tied up and imprisoned. The first boy, Travis, wakes up in a cage. covered by a cloth, sitting at the front of a church. And there in the church, a crazy minister, played by Michael Parks, preaches to an audience about the evils and sins of man. He talks about homosexuality and sleeping with a woman at the same time as other men are doing her too.

the people of the church have a man tied up and gagged, hanging on a cross, and when the preacher tells the adults to get the children out of the room, it’s time for the violence to start. the men of the church rise up, come forward and kill their prisoner. And then they take Travis out of his cage and tie him up to the cross where the last victim was hanging.

there is an escape attempt by two of the boys that leads to a chase, some action, and some dead bodies. but the major plot of the movie is about to change drastically. John Goodman is woken up from his sleep and gets a call that makes him sit up and hop out of bed immediately. It is well into the second half of the film, and suddenly the movie is about Goodman leading a team of field agents to attack the church.

what started out as a twisted horror movie now turned into an action film. Both sides are using heavy artillery, and it’s an all out war of gunfire and mayhem. I like the direction all of this ends up going in. for example, the police and fib aren’t exactly squeaky clean and seem to have a few surprises up their sleeves. and then there’s a really interesting thing that happens with some strange music and what it means.

Red State is absolutely the best Kevin Smith movie in over a decade. it really is his first film that feels like it was made by an adult, or someone with talent. and it’s also pretty decent. The movie is extremely dark and disturbing, and it doesn’t really get good until it’s second half, but starting with the introduction of the John Goodman character, this turns into a pretty interesting film. I like the way that the movie completely shifts in tone and kind of merges two genres together, the same way that from dusk till dawn did. I know that many people hate this kind of thing. they want their horror movies to stay as horror movies and their action movies to stay as action movies. they want everything to be predictable. I like it when the story dictates where things end up going and that certainly seems to be the case here. Red State is far from a great movie, but for Kevin Smith it is a huge improvement and a definite success.