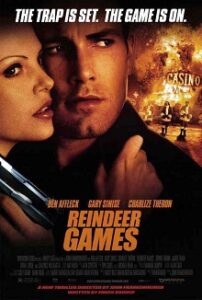 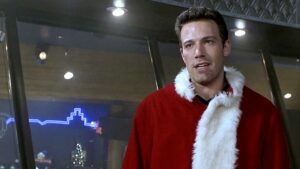 A very dumb crime movie where the character continues to dare the antagonists to kill him, and of course they never do, leading all the way up to its ending with way too many twists.

This is a pretty dopey movie. The plot itself might have been okay, and made for a decent story, if it was just handled a little better. You see, the story is about a guy who impersonates someone else, and then gets in way over his head when he finds out that “being,” this other guy comes with a whole set of consequences. This leads to him getting kidnapped by a team of criminals and made to help them rob a casino. It’s ‘nothing great, but it’s okay. The real problem is how bad the dialogue and character decisions are, as well as how little this movie comes up with to do in between the start and the end. Regarding character decisions, Ben Affleck’s character, Rudy, seems to constantly be trying to get himself killed. He does everything wrong, and seems to insist that no matter what he says or does, these criminals aren’t going to kill him. It’s pretty ridiculous. And as far as the plot, the beginning and end are fine, but there’s very little worthwhile in between. So once the idea of the robbery comes up early on, most of the movie is now spent on filler until we get to the end and can actually see the robbery as the climax. And then you have the twist after twist ending, where it’s just one thing after another until we don’t even care anymore.It’s a mess of a movie.

There’s not much to like about Reindeer Games, the Ben Affleck starring, John Frankenheimer directed action movie mess. The movie doesn’t feel smart in any way. The dialogue and characters are clunky, and the story seems to be pretty obvious. That being said, there are definitely some twists and turns that you don’t see coming. That hardly makes them good, but at least they come as surprises. In fact, the twists are in many ways detrimental – there are too many of them, so much so that we stop caring about what happens at a certain point. And then there’s the plot itself, about a team of criminals who plan to rob a casino and think they have the right guy to help them out. That story, surprisingly, is kind of original. And yet it doesn’t register as anything creative, simply because it’s not very smart. Maybe that’s why it’s original or has never been done before… because it’s not very good.

The idea itself is way too twisty and bizarre. A convict (Rudy, played by Affleck,) is in prison getting ready to be released. So is his roommate, Nick. Now Nick has been writing to a woman who he’s never met, and who he began exchanging letters with through a dating service site that matches woman with prisoners. And of course the woman, Ashley, is a breath-taking model, played by Charlize Theron. Nick plasters the wall next to his bed with pictures of Ashley. And during a food fight in the cafeteria, Nick is stabbed and killed. A few days later, Rudy is released from prison and he sees the woman, Ashley, waiting outside in the snow. So what does Rudy do? He gets off the bus, pretends to be Nick, and leaves the prison with Ashley. This is already pretty dumb.

Now it’s still just the start of the movie, maybe about ten minutes in. And already the plot is way too convoluted and convenient. Rudy and Ashley get a hotel room together and that’s when Ashley’s brother, Gabriel (Gary Sinise,) breaks into the room with his pack of goons and starts beating Rudy up. Why are they beating him? Because they want Rudy to help them with something. And this is their best idea of how to get him to do it. The goons believe that Rudy is Nick. Now Nick used to work security at a casino. So they think that Nick can help them rob the casino. And that’s their plan.

At this point, the movie should be having Rudy try to convince these guys beyond a doubt that he’s Nick, and that he can help them, and so that they don’t kill him. But not this movie. In fact, this movie does the exact opposite. Rudy now spends the next hour or so of the movie giving the goons reasons why they should kill him. First he tells them that he’s not Nick. Okay, so why so they need him? They just told him their plan to rob the casino. Does he really think they’re just going to let him leave. And after he confesses that he lied about who he was just to sleep with Gabriel’s sister. There’s no way Gabriel would let Rudy live and leave after this. And yet Rudy is pretty convinced that he can tell Gabriel the truth and then Gabriel will. just let him go.

But it doesn’t end there. Rudy decides to tell them that he is indeed Nick, after all, and to go with them to the casino. He goes inside the place, and then comes back out to report to Gabriel that the manager has changed the entire layout of the casino. Nothing is where it used to be. Rudy is trying to convince them now that he will be of no help to them. Why? Doesn’t he remember that if he’s of no help to them, then these guys are just going to kill him? Once again, he believes that these guys will just be okay with him not knowing anything and will turn around and let him go. It is just so stupid. The audience is ten steps ahead of the main character every time with this one. “No dummy, if you’re of no use to them, then they’re just going to kill you.

Rudy does plenty of other things to seemingly try and get himself killed as well. He treats Ashley terribly in front of Gabriel, not even thinking that Gabriel might have a problem with seeing his sister get treated like this. And Rudy even tries to escape, getting pretty far on the ice and throwing their operation in danger when a bystander sees them and tries to help. This leads to the bystander being shot and killed by Gabriel. And that’s pretty much the story of the movie. Rudy just keeps acting super confident, thinking these guys aren’t going to do anything to him, and they keep proving him wrong. At one point, Rudy is freezing from having fallen under the ice during his getaway attempt. He now gets a torture punishment of having the guys throw darts into him. So now he knows that these guys aren’t playing around and will indeed torture him if they are pushed. And what does Rudy do? He keeps pushing them. They meet up in the back of a truck to make a plan, and Rudy starts cracking jokes instead of telling these guys what they want to know.

None of this makes any sense. It doesn’t make sense that Rudy turns on Ashley (he does this because she confesses that she knew Gabriel was going to “speak with Rudy,”) but even still, she’s the only one looking out for him here, giving Gabriel a hard tie whenever he beats on Rudy. So maybe being mean to her isn’t a bright idea. It also doesn’t make sense that Rudy is so confident around these guys with everything he does or says. What makes him think that if he keeps pushing them, they won’t just shoot one of his fingers off, or shoot him in the foot or something? Still, the movie goes on repeating the same beats and ideas over and over again, with very little new to offer. A joke gets repeated, for example, where one of the goons refers to Santa’s elves as dwarves. And Rudy keeps correcting the guy. This is the kind of bad writing that this movie was built on.

Part of the problem with the movie is that it clearly has a beginning and an ending, but very little in between. At the start, you have the setup where Rudy’s buddy in prison keeps going off about this girl, and then the friend is killed, and Rudy pretends to be his friend in order to get with the girl. And at the end, you have the robbery and then all of the double-crossing twists that follow it. But what about in between? Sure, there’s the meeting Gabriel and his goons part, but other than that, this movie really doesn’t have a whole lot. And so it spends its time trying to find filler, like having the guys all go to the casino to check it out, even though the truth is, if you were gonna rob a casino then going there ahead of time to scope out the scene would be a terrible idea. That’s how you recognized by customers or employees who can say something like, “I recognized the guy who robbed this place. He was here just three nights before.”

But this movie isn’t built on logic. It’s not built on anything more than its start and it’s end. Two points at the ends of the spectrum and no real path for getting from one to the other. A better move might have been to have Rudy and Ashley spend a solid amount of time together in the first half, really developing as couple, and then suddenly Gabriel comes in and the entire tone of the movie changes. That might have been the kind of twist where we never saw it coming. One of those movies like From Dusk Till Dawn, where the first half is one thing, and then second half is something totally different. But here, they want to get to the Gabriel part as quickly as they can, for some unexplained reason. Maybe it’s because that’s where, they feel, the movie starts to get exciting. And they’re afraid that we’ll be bored up until that point. But the truth is, once we get to Gabriel, the movie really doesn’t have a whole lot else to offer up until the end.

Reindeer Games is a movie where everything on screen here, from the dialogue to the characters to the action, just screams B movie. Nothing is smart or well-done. This is one of those movies that was made when Ben Affleck was at his lowest point as an actor. It was movies like this and Paycheck, and then of course Gigi and Jersey Girl. Those movies led to the sort of death of Ben Affleck as an actor, until he had to reinvent himself as a director (Gone Baby Gone, The Town, Argo,) before he could come back as an actor to be in big movies again, like Justice League. But Affleck the actor and Affleck the director are almost two different people. As a director, he’s super talented, but as an actor, he sure picks some pretty bad movies to be a part of. Reindeer Games is most certainly one of those. The initial log line here might be somewhat interesting, but the movie sure isn’t. Occasionally, it’s kind of fun in a “I know this is bad, but who cares, let’s just roll with it,” kind of way, but mostly it’s just roll-your-eyes at it kind of material. If only they took the time to work out a middle that would get audiences from the beginning to the end without feeling like the movie was just wasting time. Not that the beginning or end are so great, but obviously those were the areas of the movie that the writer actually gave some thought to.