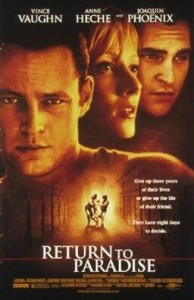 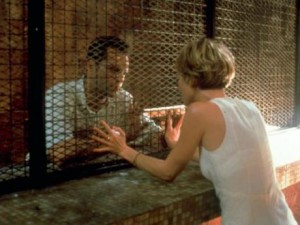 Pretty compelling stuff, this movie is fascinating and dramatic, but also quite upsetting in a midnight express meets brokedown palace kind of way.

A very gritty and intense film, this is a powerful movie that is equal parts entertaining and upsetting. it’s a movie that really captures the vibe of midnight express without having to spend nearly as much time inside a foreign prison. like that movie, this one is about an american who is convicted for drug possession while overseas, and is now sentenced to do jail time in a third world country. but unlike that film, this movie is more about the characters who dodge the bullet than it is about the guy who got caught. those two characters are now faced with a dilemma. they can go back to malaysia and do jail time themselves for their involvement, or else their friend will be hung. this is not an easy situation, and the movie handles it well.

Return To Paradise is a hell of a film. there’s no question about it, this is gripping material. the only reason it’s not more well known is because the movie is so upsetting to get through. this is not the kind of movie you can watch again and again. i saw it once, in 1998, when it came out, and now for the second time, nearly twenty years later. it’s that kind of a movie.

the story is about three friends who spend a summer hanging out in penang, malaysia, where they lay out in hammocks, get with some very pretty girls, and smoke tons of hash. these friends are sheriff (vince vaughn), lewis (joaquin phoenix), and tony. at the end of the summer, it is time for two of them to return to the states. only lewis stays behind, thinking he will start working with orangatangs and doing what he enjoys, being around nature and animals. lewis is the most kind hearted of the three of them. when they rent a bike from an old man, lewis insists on bringing it back even though it means walking it up a hill. sheriff, on the other hand, grabs the bike and throws it over the edge of a cliff.

that bike situation actually causes a lot of trouble for the boys. especially lewis, after the others have gone back home to the u.s. it is now months later and sheriff is driving a limo around town. he doesn’t really like his job or the kinds of people he has to deal with. there’s one scene where he is driving a couple that is having sex, and sheriff stops short on purpose, telling them he hopes they were strapped in. then in another scene, he tells a guy that it’s okay to smoke in the car and the guy takes out a crack pipe. sheriff is not enjoying any of this.

then one night a woman requests his services, and when he goes to pick her up, she tells him that he was recommended to her by lewis. this woman is beth, played by anne heche, and when sheriff asks how lewis is doing, beth tells him the truth. lewis is in the penang prison because of the all of the hash. it happened right after sheriff and tony left malaysia. the old man came looking for the bike and brought the police with him. they didn’t find the bike, but what they found was all of the hash. it was tony and sheriff’s share, as well as lewis’, but since lewis was the only one there, it looked like it was all his. since it was well over the limit, he was considered to be trafficking, and so the charges were extra serious.

beth explains to sheriff that she is lewis’ american lawyer, representing him here in the states, and that in six days time, lewis mcbride is going to be hung. the only way this can be changed is if sheriff and tony go back to malaysia and take some responsibility. they have to own up to the drugs that were theres and voluntarily go to prison. if that happens, then the prosecutor has agreed to reduce some of the charges.

of course, from the moment he hears this proposal, sheriff’s reaction is to tell beth to get the hell out of town. what happened to lewis is terrible, but there’s no way he’s going to voluntarily go to prison in malaysia. it’s during the course of the movie that things start to change. for one, tony is interested in going and that helps persuade sheriff. another is that sheriff realizes that he’s the kind of guy who is going nowhere fast and never really does things for other people. when he goes to meet his father, his father tells him to quit wasting time with this dilemma since they both know there’s no way sheriff is gonna go.

there are a couple of meetings between beth and tony, including one restaurant sitdown where sheriff shows up and tony’s wife lets him have it. this is vera farmiga in one of her earlier roles, and it’s her only talking scene in the movie, but boy does she make it count. the first half of the film is all about this setup and situation with the lawyer out there in new york, trying to convince the guys to do what they know is right.

another complication is that there is a reporter who has gotten wind of the story and wants to run with it. this is m.j. majors (played by jada pinkett), and she knows it’s a hot property and wants to be the first one to break it. beth begs her not to publish anything, citing the caning incident in singapore where the media spectacle led to the country having to make a bigger example out of the kid than they normall would have. beth asks for three days and m.j. agrees.

after about half of the movie has gone by, the setting switches and we return to singapore. it’s uncertain if the guys have made up their minds yet and are really going to do this or not, commiting themselves to the prison, but they are getting close to the trial date and will need to figure it out soon. sheriff goes to the prison to visit lewis and what he sees is incredibly upsetting.

there are some unexpected surprises at the end of the movie, none of them very positive. like midnight express, this is a movie that haunts you more than it makes you feel good about anything. it is powerful and smart, and vince vaughn gives one of his better performances. for one thing, he is not trying to be super funny here, as is his usual routine, ever since joining up with the frat pack of comedy in old school. this was an earlier vince vaughn, coming two years after his breakthrough movie, swingers. he looks very young here, as does joaquin phoenix who is also in the early stages of his acting career with this movie. it’s a good film, and extremely powerful, but also kind of hard to get through.