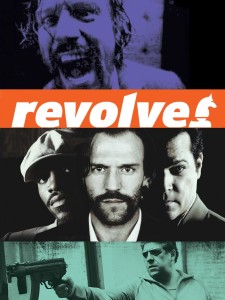 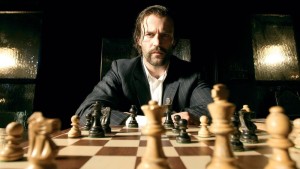 By far the worst guy ritchie movie, this one still has his artistic touch, but a terrible story with very litte going on.

This movie is a disaster. guy ritchie might be a master director, but this is absolutely his screw up film. gangster movies are his specialty, but with this him, ritchie got so overconfident and arrogant, that he thought he could make something work without having a story. at least no story that in any way felt original or had something new to offer. Revolver ends up being all style and no substance. the characters are terrible, as is the dialogue, action, and nearly everything else. the movie is about a guy who just got released from prison, and is now going after the big crime boss who put him there, only this doesn’t play like a revenge movie. it plays like a movie that doesn’t know what it is or what it wants to be. there is definitley style here, but even that is nothing compared to the style that ritchie demonstrated with his other films. this movie is his lowest point as a director, and it is a total and complete waste of time.

Revolver is really, really bad. it is so bad that more than once during this movie i considered turning it off. in fact, at one point, i think i even did, being perfectly ok with not knowing anything else about the film and where it went, and being the better because i had saved about an hour (the amount of the movie i had left), of my life. but then i got to thinking about the ending and about a twist that might be in it. not that it was any great twist at all, but i still wondered if i was right, and decided to watch just to find out. i was, and it wasn’t a very creative or interesting twist, and in retrospect, the wiser move would have been to turn the movie off and not finish it. knowing the twist was not worth sitting through this film.

i suppose i was hoping that the movie would get better. after all, this is a movie by guy ritchie, a director with so much talent that he is able to balance humor, action, and suspense all at the same time. all three of his great movies include each of these elements. those movies, of course, are lock, stock, and two smoking barrels, snatch, and rock n’ rolla. they are all masterpieces in their own way, and lock, stock and rock n rolla in particular, are works of art. now i know that ritchie directed the madonna film swept away (the remake), which is supposedly terrible, and i don’t doubt that it is. but that movie was him out of his element. guy ritchie’s element is gangster movies. and Revolver was a gangster movie. so i could see no reason why this would be a bad film. boy was i wrong. not only was it bad, but it got worse and worse as it went on.

in it’s best moments, this movie reminds me of smoking aces. now that’s not a very good movie, but it’s certainly a hell of a lot better than this one. Revolver tends to remind me of that film because of how many characters who include, that are complete cardboard cutouts with nothing oringinal, smart, or funny to say. another reason for the comparison is because a lot of it takes place in a hotel, and a third reason is because of the presense of ray liotta, who was in both movies.

in this film, jason statham is the star, and he plays jake greeen. jake has just been released from prison and now he wants to get back at the man who put him there. that would be dorothy macha (liotta), who is now a big time mob boss. does any of this sound original? Of course not. jake goes to visit the mob boss right away in a hotel casino and makes a bet and ends up taking a lot of money off the guy.

then jake leaves and as he’s getting out of a car the next day, he bends down to see a card on the ground that tells him to duck. just as he does, a bunch of bullets go shooting over his head. turns out there is a hitman who was sent to kill him, named sorter (played by mark strong.) the guys who put the card on the ground to warn jake are zach and avi (vincent pastore of the sopranos, and andre 3000 from the band “outcast.”)

these are hardly the best actors. for a guy ritchie movie, it’s a step down from just about anything he’s done, casting-wise. he went from brad pitt and benecio del toro in snatch to this. and then in rock n rolla, he got an all star cast again, including gerard butler, tom wilkinson, idris elba, and jeremy piven. but Revolver is the movie that fell between the cracks, and boy did it fall hard.

jake now goes to work for the two guys who saved him. he also plays a lot of chess against avi in cafes. the story has the three man team now pull of jobs, including stealing from dorothy. they boost out a safe of his which is impossible to open, but not impossible to steal. so they steal it, and now he’s out a whole bunch of cocaine that was in the safe and that he now owes to a higher up boss.

the problem is that we don’t really care. ray liotta is not playing an interesting character here, or a character who really does anything that evil. we don’t hate him the way we are supposed to hate a movie villain. instead, we are just indifferent. to make matters worse, the plot really doesn’t go anywhere at all. it’s not about getting to dorothy. even when jake does get to him, sneaking into his befdroom in the middle of the night, it ends up being completely inconsequential.

i really do wonder what was the motivation of guy ritchie to make this movie. the same can be said of the cast. on the plus side, this is the movie that finally broough ritchie’s two main stars, jason statham and mark strong, together. statham was the star of lock, stock and then snatch. strong was the star of rock n rolla. Revolver represents the cross over moment where the two actors were on screen together, and statham basically passed the torch off to strong. if only it were a better film.

the movie starts off pretty cool with some fantastic style. that’s guy ritchie’s specialty he turns the music up really loud and has a character going in and out of voice over while we listen to the music in the background and watch the images of characters walking through interesting environments (like a casino floor.) ritchie is definitely talented, but he needs a good story. a movie cannot exist on style alone. this movie should prove that. Revolver tries to use extreme colors and black lights, as well as every other trick in the book. none of it works. when he has characters repeat things in voice over, again and again, to the point of sounding like a broken record, it is more annoying than anything else. i don’t hate this movie, only because it does have some style, especially in it’s first half. but it gets really really bad after that, and ends up being an incoherent mess.