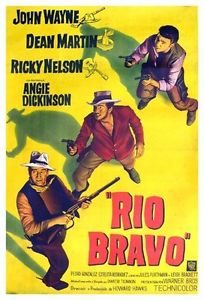 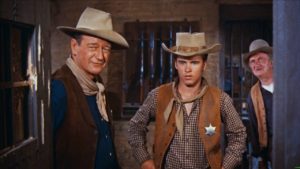 A fine premise and a pretty good first half gets lost in the mess that is the long, slow, and dull second half.

There’s a solid story at play here, and unfortunately it gets used up and worked out in the first half. To make matters worse, the movie is two hours and twenty minutes long. Perhaps no movie would have benefited from a shorter running time in history. In the first half we learn of our characters, an old, timely sheriff, (John Wayne,) his drunk new recruit, (Dean Martin,) and the old man jail cellar guard who is trigger happy, (Walter Brennan.) We also get into the situation, where a man is being held in prison and his brother wants him out. His brother is a powerful man who has hired other men to come and help. And it’s up to the Sheriff and his deputies to hold the man there. That’a about the extent of the story, and the movie does a good job with it in the first half. Unfortunately after that, there just aren’t enough places to go, and the movie continues to drag on and on.

Rio Bravo is a movie with a pretty cool premise that just really lets things get away from the story. The movie’s first half is quite strong. That’s where the ideas really come out and the threats are made. And then, somehow, they manage to drag this thing on for a running time of two hours and twenty minutes. It just keeps going and going and going until it passes the point of us being bored and reaches of the point of us not caring anymore. Talk about a waste. But the first half still stands on its own as what could have made for a great movie.

This is a Howard Hawks film starring John Wayne. Hawks is the guy who made His Girl Friday, Bringing Up Baby, and the Big Sleep. With those fast-talking, black and white Cary Grant or Humphrey Bogart movies, he was right in his element. With westerns, he was not. He also made the western Red River, which wasn’t a whole lot better than this one. But with Rio Bravo, (as with its sequels, Rio Lobo and El Dorado,) he had John Wayne, and Wayne was the biggest western movie star on the planet. This guy basically pioneered the genre, the way that Andy Serkis has done for motion capture. Wayne was more than an actor. He was a personality. And he had it here, in this movie, playing Sheriff Chance. The problem was that the movie didn’t seem to appreciate what it had.

There’s a great opening scene which has no dialogue as a drunkard gets into it with some locals at a bar. The drunkard is Dude, (Dean Martin,) a former deputy who was left by a girl, and has since fallen off the wagon. Dude shows up to the bar and watches a man drink. The man sees that Dude wants some and holds out a coin. Only instead of giving it to Dude, the man throws it into a spittoon (a metal jar where men spit their tobacco.) Dude goes to get it, and Sheriff Chance kicks over the spittoon. He wants Dude to have some self-respect. That’s when Dude strikes the Sheriff.

There’s a man there who has been watching the whole thing, just waiting to get involved. This is Joe, the brother of a well-off bar owner in town named Nathan. Joe gets involved when Dude punches the Sheriff. Joe starts punching Dude. Then a bystander jumps in and Joe shoots the man dead. He then leaves the bar. At that point, Sheriff Chance goes to Nathan’s bar, where he finds and arrests Joe. He has Dude helping him. This opening sequence might be fast paced and exciting, but it does leave a whole lot of holes or questions, (depending on how you look at it.) First, why is Joe punching Dude after Dude hit the sheriff? What does Joe care? And second, why is the Dude backing up the Sheriff, right after punching him? Perhaps the reason for that is because Joe just punched Dude, and so Dude wants his vengeance on Joe, but still, it feels a little out of place that the Sheriff and Dude would go from punching each other one moment, to working together the next.

Even still, this is one of the parts that actually does work in the movie. And it brings us into the central plot. Sheriff Chance has this prisoner Joe holed up in the prison of a small town. He’s waiting for the right opportunity to move Joe to a more secure location. Only he can’t, because Nathan’s men are all over town, watching him. So he just sits there, with his guards, waiting for the right time to make his move. And that’s pretty much the movie. It’s a lot of sitting around and waiting. Another classic western did that too. It was High Noon, and the whole movie rested on the idea that our hero, (played by Gary Cooper,) knew that this man he put away had just been released from prison, and was now coming for him. That movie was an exercise in how to build tension, with everyone knowing (from the title alone,) that at a certain time, hell was coming for this guy. It was just a matter of hanging in there, and counting down the minutes.

With Rio Bravo, we’re not quite as lucky. There’s no countdown of any sort, and perhaps that’s part of the problem. Instead, we get lots of close calls and moments that we think should lead to something, but actually don’t. There is some more happening in the first half though, which manages to keep the movie afloat. First, we learn the backstory about Dude. We learn about how great he used to be as one of the sheriff’s deputies, and how much of a disappointment it was to everyone, when he took up drinking instead. And second, we meet an older man named Pat Wheeler who is a friend of Sheriff Chance’s.

Wheeler doesn’t like the position he sees his old friend in now. He doesn’t like that the only men working for Chance are an elderly guard, (Stumpy, played by Walter Brennan,) and a drunk. Wheeler tries to hire out one of his men, named Colorado, (Ricky Nelson,) to work with Chance. Colorado is young and skilled as a gunfighter, only he wants no part of this mess. So Wheeler goes around telling people that Chance needs help and that it’s not right, what is happening to him. And that gets Wheeler killed. It’s a big moment as we see a gunman target Wheeler from inside a shop that Wheeler is walking by. And that leads to a chase that lands our two leads (Chance and Dude,) inside a bar, chasing down this killer. It’s exciting and thrilling, (although a little too convenient, how they end up finding the guy due to some falling blood that just happens to land right in a glass of beer,) but still, it’s probably the highlight or most exciting part of this movie.

From there, everything goes south. There’s a love interest here, named Feathers, (played by Angie Dickinson,) and she has some interesting encounters with Sheriff Chance. Mainly their first meeting, where he accuses her of cheating only to realize that it’s someone else at the card table who is responsible. But like most things in the movie, their banter and exchanges get tiresome and then just die down to nothing in the second half. And pretty soon we are left just waiting around for something exciting to happen.

Only it doesn’t. Instead we hear about things and expect results, only we don’t get them. So, for example, Dude getting kidnapped. Twice. Each time we expect something big to come out of it, like “oh, so now our heroes will have to go and rescue him and it will be the big climactic action scene.” Only no such luck. This movie even manages to squeeze in two different musical numbers, back to back, right when we are expecting it to get to the climax. Talk about dragging this thing on.

The thing is, Rio Bravo is very dated. People of the generation from when this movie came out loved those musical numbers. Dean Martin sings one song, “My Rifle, My Horse, and Me,” and then Ricky Nelson (Colorado,) sings another song. It would be like George Clooney singing one song and then Brad Pitt singing another these days. Only today, it’s seen as what does all of this do for the movie. Sure, the characters are all just sitting around the prison waiting, and so perhaps they’re some realism to them breaking out into song, but the movie is overlong to begin with and adding songs at this time just makes it even longer. Two hours and twenty minutes for a western like this is ridiculous, and it would have been a much better film had they paid attention to things like and made some cuts