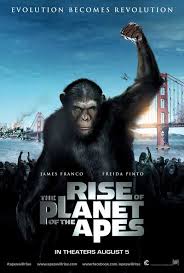 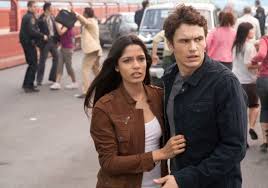 A pretty interesting and cool movie, that might not offer anything new, but is still fun while you’re watching it.

Rise of the Planet of the Apes is a prequel to all of the other movies that came after it. It isn’t necessarily part of any one series of the film, and doesn’t star a single actor who was in any of the other movies, not even the more recent Mark Wahlberg – Tim Burton take on the franchise. instead, it’s a movie that wants to be it’s own thing. it wants to relaunch the franchise in a new and exciting way, and to really begin a new trilogy and have sequels that follow.

The new and exciting way this movie does things is by motion capture CGI. the computer effects are the highlight of the film. Andy Serkis, the go-to-guy for motion captures work, is on hand here, playing Caesar, the star ape, and giving the computer wizards a real actor to work with. and the things they can do with computers and have the apes doing are pretty amazing.

From the very first time we see Caesar, as just a tiny little chimp about the size of a little puppy, computers create him. now there’s no reason why a real live chimp couldn’t be used here, but the movie has a plan and knows exactly what it’s doing. It’s getting us used to the CGI. It’s showing us that if they’re gonna use it from the very beginning, from before any of the real action is even hinted at, than maybe by the time things really get underway, we won’t be looking at it as CGI anymore, but just embracing it as real. the strategy works. we stop thinking about the apes in this movie as computer generated, pretty early on.

The other thing the computers do is allow Caesar to move in whatever ways they choose, and allow the camera to follow him. this could never be done with a real ape. yes, maybe the ape would do some amazing things, but there’s no way the camera could soar up into the rafters right behind him, catching his every move, and gliding through the air, just like he does. As soon as we see that scene, of the little baby Caesar swinging through the house with the camera moving right behind him, we know why this movie went the computer route. we can tell right then, in that moment, exactly what this movie has in mind, and how it plans to push the boundaries on any of the planet of the apes movies that came before it.

The story follows will, a young scientist (James Franco), who is trying to cure Alzheimer’s by testing out new pharmaceutical drugs on chimps. The chimp he uses the most is Caesar, and the results seem to be amazing. Caesar can put together, take apart a block statue in size order, and do it in a very limited amount of steps. Nonetheless, the project is cancelled, and will sneaks Caesar out of the lab to become his own stay at home pet.

Will’s father, played by john Lithgow, has Alzheimer’s, and one day he mistakes someone else’s car for his, gets behind the wheel, starts the engine, and crashes into cars all around him. The neighbor whose car it is grabs him, and Caesar sees from inside the house. he breaks free, gets outside, and attacks the neighbor. When the neighbor runs away, Caesar follows him, jumping into the trees and then attacking again. After this scene, will is forced to send Caesar away.

that pretty much wraps up the first segment of the movie. There are three all together, and the other big thing that happened in the first segment were will and Caroline (the ever-beautiful Frieda Pinto from Slumdog Millionaire), meets, start dating, and hit it off. They start dating when Caesar is still young, and years later they are still together.

The second part of the film involves the abusive holding area where Caesar must stay after will is forced to send him away. It’s run by Brian Cox, and has the guy who plays Malfoy in the harry Potter movies working there as well. these two are some of the villains of the movie. Especially the Malfoy character who physically abuses the apes. the second act starts out a little slow, but boy does it build up. By the end of this act, we have Caesar becoming a sort of army general to the other apes, rallying his troops, and using a cool secret code involving cookies, to let the other apes know what’s going on.

The final act is the attack on San Francisco. The apes run wild as Caesar gets them all riled up. they storm the golden gate bridge and charge through the streets. it’s cool to look at, and I love how the movie takes its time with it. another movie might have botched this final act, thinking they could just let loose and stop thinking about their plot. not this film. there’s a wonderful moment, for example, where the apes use a sideways bus as a shield and push it forward as the Police and swat stand by waiting to see what will happen next. they don’t realize that the apes actually have them surrounded on all sides, including both under the bridge and above them.

Rise of the Planet of the Apes is a pretty cool movie. sure, we know the attack is coming, from the very start of the film. after all, it’s in all of the trailers. But knowing what’s coming just makes the journey to get their all the more scary. The act where Caesar takes over in the ape’s facility and rallies his troops like a prison break from a maximum-security penitentiary is pretty amazing. Everything is done carefully, including a move where Caesar has the opportunity to kill an enemy ape, and instead allows the ape to bend down to him and show subordination. The experimental drug plot might be clichéd, and reminiscent of evil big corporation movies that forgo human safety (such as the alien films), but it’s still a lot of fun. that’s pretty much the be all and end all of the movie. it might not always be new, but it sure it cool and fun.