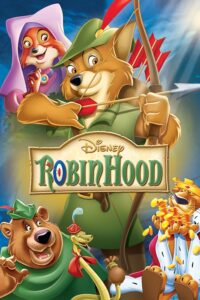 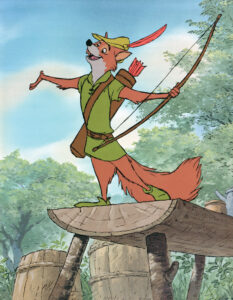 A light-hearted, humorous and entertaining take on the classic hero who robs from the rich and gives to the poor.

This is a fun, quick-paced animated film. It’s the classic story told with just enough structure to show us all the important characters before throwing them into a series of action scenes. There’s the train robbery, the archery contest, and the dungeon hail break. The movie is smart enough to limit this amount of sequences, and therefore leave a little time to develop each one of them. And it also has plenty of comedy, mostly centered around its villains. The quick pace go a a long way with keeping this one exciting at all times.

Robin Hood is a classic story of a bandit thief who challenges a corrupt king by stealing from the king and using the money to help those in need. There have been countless versions of the tale, from the Errol Flynn swashbuckling adventure to the Mel Brooks spoof, Robin Hood: Men in Tights. It’s a movie and story that gets remade every decade or two. In the last three decades alone, there have been two versions, the Kevin Costner definitive classic, and then the Russell Crowe – Ridley Scott Crusades version. Despite all of these, the Disney animated take on the story from the seventies still stands its ground as one of the best.

The animated movie works, in large part, because of how simple it is. There are only four major events, and the first of these happens at the very start of the film. It features Robbin Hood and Little John robbing Prince John’s caravan train (having two characters named John, when there’s only about five name-characters in the entire film isn’t the smartest move, but that goes back to the original story, and is not the fault of this movie.) The train robbery is a quick, easy, snd fun way to kick things off and introduce us to most of the important characters.

After the train robbery, the other four sequences include an archery tournament, a forest celebration, and finally a castle dungeon escape finale. And one of the many great things here is that because there are so few major set pieces or events, each one of them is given the time to be set up nicely for the audience. With the archery tournament, for example, we see the inception of the tournament (the villains crafting the idea to have it, in order to trick Robin Hood,) to the setting up before the tournament begins to the actual tournament itself, and of course, it’s aftermath.

Similarly, the end sequence of the movie is also setup. There’s a lot of that “calm before the storm,” kind of thing, where the movie takes its time showing where characters are before things go down, and what they are doing, so that the pieces fit into place all the more smoothly. So with the finale, for example, we see the vulture guards building the gallows (a strange sight to see in a kids movie… try explaining to little kids what those will be used for,) and we see the prisoners, as well as The Sheriff of Nottingham, all falling asleep.

That sheriff is one of three villains here. The other two are always together. There is Prince John the lion (or PJ as Little John calls him, in a friendly way.) Prince John is a sniveling coward who constantly sucks on his thumb and says “mommy.” It’s a bit much, but for a children’s movie, it works. And his loyal assistant is Hiss, a rattle snake. The running joke here is that Hiss is always suspicious and right about everything, but Prince John never believes him. Then when things are over, and Prince John has a moment to reflect, Hiss will come along and say “I told you so,” which only makes Prince John more angry. The final punchline is always Prince  John doing something physical to Hiss (stuffing him in a container or tying him in a knot or something like that.)

The train robbery at the start of the film establishes Robin Hood and Little John as best friends and partners in crime. But it also establishes the dynamic between Prince John and Hiss. Later on, we see the two of them asleep, with Hiss sleeping at the foot of Prince John’s bed, and you can tell that they really are best friends who do everything together. But what an abusive relationship it is. By the end of that train robbery, the only major characters who haven’t been introduced yet are Maid Marion (Robin Hood’s love interest here,) The Sheriff of Nottingham, and Friar Tuck. Not to worry, they are all about to be introduced in the next scenes.

Following the train robbery, we go into the town.  This is where we see that Friar Tuck is a religious figure who runs a Church and takes collections for the poor. We also see the Sheriff come through the doors, steal from the collection box, and rip everyone off. And we see how Robin Hood shows up, disguised as an old, blind beggar, to help make things right. Meanwhile, by the castle, we meet three kids whose bow and arrow game leads to them sneaking into the castle courtyard, where they meet Maid Marion and her lady in waiting.

This leads to the archery tournament. Both Robin Hood and Little John show up disguised. Robin is out partaking in the contest, while Little John speaks with and charms Prince John. Both scenes happen simultaneously, and when when the Sheriffs vultures use cheating to help him get ahead in the tournament (one of them hides inside a target so that he can move the target in order to accommodate the Sheriffs arrow,) it still doesn’t phase Robin. He easily shoots an arrow right at the target where the Sherrif’s arrow sits in the bulls eye section, and Robins arrow splits the Sheriffs arrow in two.

The tournament results in a fight, when Robins stork outfit is revealed to be a costume. That’s where Little John comes in to help, grabbing Prince John from behind the curtain and telling the Prince what to say. At the end of the sequence, Robin and his friends get away, and make it back to the forest for a celebration. we get a puppet show, a little time alone with Robin and Marion, and a song that ends up becoming a hit all over the kingdom.

The final sequence is the castle escape. It starts by Prince John’s retaliation for what happened at the tournament. He raises taxes, and when people can’t pay them, he locks them up in his dungeon. This brings Robin in to help them all escape. And while doing do, the castle catches fire, making it an extra exciting climax. It all works! In fact, nearly everything about this movie works. The quables are tiny tidbits of ideas where one or two lines might have helped clear things up. Like who exactly is Maid Marion and her relationship to King Richard? Why is she living in the castle? It might have been nice to know this, or about he’s past history with Robin, but the movie still excels without that information. It’s a great, quick-paced, and fairly simple movie that is a lot of fun.