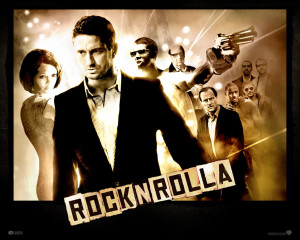 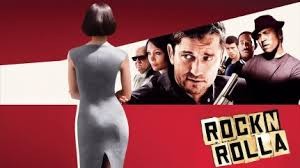 A very cool british gangster flick with not only style and story, but also humor and fun characters.

A movie that is very much about style and only somewhat about story, this one is clearly made by Guy Ritchie and is a trumped up version of his breakout film, Lock, Stock, and Two Smoking Barrels. That means the cast is better, the lighting and effects are better, but the story is more or less the same. There’s a group of friends, (in this case, they call themselves the Wild Bunch,) and they do jobs and get mixed up with the wrong people, including a gangster. In this movie, there are many more threads than in Lock, Stock, and we not only follow the boys and their connections, but the connections of each of the other characters as well, including those of this gangster. There is some fantastic music, slow motion work, and filming here. There’s also plenty of good humor. The only problem is that the movie is somewhat anti-climactic. Otherwise, it’s a lot of fun.

Rock N Rolla isn’t really about a Rock N Rolla. He’s one of the many characters in this movie, but he’s hardly the star. the Rock N Rolla who’se character ends up getting the title of this film is johny quid, a rock star / drug addict. he also happens to be the son of british gangster lenny cole, and a conniving thief. but his character is only about one tenth or so of this movie. the real focus of the film is a painting which ends up going from place to place as the characters who are either looking for it, or planning robberies around it, have various clashes and interactions with each other, some more violent and deadly then others.

basically this is a movie about characters. like guy ritchie’s other great movies, Lock, Stock, And Two Smoking Barrels and Snatch, the characters come first and then the story around them. this movie is mostly about a group of low level criminals who call themselves the wild bunch and hang out at a bar waiting for jobs to come their way. what they’re really interested in is real estate, buying a building and making a profit from it, only that’s not so easy with their criminal records.

the opening of the movie sets up pretty quickly exactly who everyone is and what they’re after. lenny (Tom Wilkinson in a remarkable performance), is the guy who can make things happen. he’s highly connected to all licensing boards and can get the “planning” or paper word for anyone he wants. he also lends money. and he lends it to the wild bunch (mainly one, two and mumbles, played respectively by gerard butler and idris elba). only once they have the money, the still can’t get the paperwork and that’s because lenny owns the people who can get them the paperwork and doesn’t want to give it to them. it’s a bit confusing at first, and this is definitely the kind of movie you need to see over and over again to appreciate.

but it’s because the movie is so smart and crafty that it’s worth seeing again and again, and that one comes to appreciate it the more times they see it. so lenny has screwed over one, two and mumbles without them realizing it, and now they owe him money. the money that they borrowed. but at the same time as all of this is happening, lenny is also doing business with some russians who want to buy a stadium. once again, lenny is the guy who can make that happen and all he needs from them is a delivery of their money.

the russians go through an accountant, played by the fabulously seductive thandie newton, who is at her best here in this film. she isn’t evil, but just sneaky and oozing with confidence as she walk around in tight dresses smoking a cigarette. she hears about the money from the russians and tells one, two and mumbles about it as a job where there’s money that they can steal. and they do.

that pretty much completes the first circle of the movie. it’s a lot and involves a lot of characters back stabbing, double crossing, and stealing from each other. and the funny thing is, it’s only one circle. it’s only half of the story. the other half is about the painting. it belongs to the russian leader and it’s his lucky painting. he lends it to lenny until their business deal is complete (whether or not he would really lend out his lucky painting is irrelevant, because the painting serves as a pretty cool mcguffin that we never get to see). it’s like the suitcase in pulp fiction or the rabbit’s foot in mission impossible III. It doesn’t matter what’s in it or on it, all that matters is that it’s something that everybody wants.

well, that painting is stolen from lenny’s house and the russian wants it back. lenny finds out that his son, johny, might have stolen it, and that brings us our Rock N Rolla. johny hangs around with junkies and it isn’t long before the painting is stolen from him and keeps traveling from there. meanwhile, there are other stories at hand here too.

there’s one about handsome bob (tom hardy before he was the inception guy who would be playing bane in The Dark Knight rises), and how he’s about to go to prison to do a two year sentence. it’s his last night and there’s one thing he wants more than anything else in the world. that story folds into the other one because bob is only going to prison due to the testimony of an informant.

the informant is one more plot line this movie has going on. nobody knows who it is, but over time, this person has put in just about all of them at one point or another, and been the cause for each of them doing time in the joint. who the informant is becomes a mystery of the movie that mixes in nicely with everything else.

this movie really does have it all. it’s got action and robbery scenes, fantastic comedy as the boys joke around with each other and constantly use british slang, wonderful style and music. it even has record producers, played by jeremy piven and ludacris. piven in particular plays a producer / agent better than anyone, as can be seen on his hit show entourage, and here he’s right at home. this movie transends genres and merges criminal activity and mystery with comedy nicely. it’s dark when it wants to be and funny all the rest of the time. if lock, stock was ritchie’s warm up piece and snatch was him experimenting and getting a little too silly at times, then this film is where he finally balances it all out. it’s a lot of fun, from it’s slang words which often challenge you to keep up with them, to it’s amazing casting. idris elba and thandie newton are both super cool here. and gerard butler, tom wilkonson, piven, and tom hardy are all a lot of fun to follow. this is a hell of a ride, from start to finish.