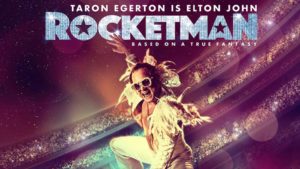 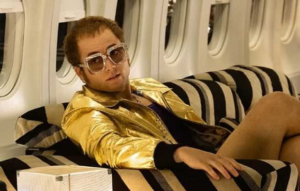 An interesting story, but not enough of what we would want, including the songs or showing us how they got made.

The strange thing about Rocketman, the Elton John biopic, starring Taran Edgerton,  is that it doesn’t show us Elton coming up with the songs. It doesn’t show him playing around with and experimenting on different rhythms, to find the right beats. Instead, it tells the story of Elton’s life and uses the songs in the background. This turns out to be a huge mistake. Of course we want to see him writing the songs. That’s why he’s famous to begin with. The story here is pretty good, as it tells the tale of Elton’s depression and drug addiction. But it also reminds us that we’ve seen this kind of kind of thing before. The idea of using songs to show where they came from in John’s real life, is pretty good, but they could have easily find that while showing John write the songs as well. The result is an okay movie, but an overall missed opportunity.

Biopics, or biography movies are a tough sell. Most of them are about people who did great things with their lives, elevating them to the status of loved celebrities (celebrated people.) And so with the movie version, we hope to see the story of how they did these great things. If it was filmmaking, then we would want to see a behind the scenes look at how they made the movies, (like in the Anthony Hopkins film, Hitchcock.) If it’s music, then we want to see how the songs were made. How did the artists come up with the beats and the words? The Oliver Stone Doors movie did that. Bohemian Rhapsody does that for Queen. But Rocketman, the new Elton John biopic, most certainly does not. It tells his story, but it does not tell the story of how he made his songs.

Instead, the movie concentrates only on the story of Elton’s life. Now all of those other movies tell the story of the artist’s life as well, but this one strategically and intentionally leaves out the story of his coming up with songs, and that turns out to backfire. The story here, chronicles his childhood all the way through his adulthood, to show how his upbringing might have led Elton to a path where he would always be looking for acceptance. The movie opens with Elton walking through hallways, dressed as the devil, (complete with wings and horns,) busting through doors with bright lights flooding the way. Turns out he is going to rehab. And we are meant to think that this whole thing of him entering as the devil is symbolic, (like he is coming in as a drug addicted mess of a person and will leave the place cleansed.) The cool thing is that we later learn, this is based on truth. He really did enter rehab dressed as the devil (at least according to the movie,) and do it works on not only s symbolic level, but also a literal one.

Long before that, however, Elton is just a boy, named Reginald Dwight, living with his mom and dreaming about music. His father isn’t around much, and so his mom has affairs with other men. She also supports Elton’s love of music, and notices his gift. He can listen to a song and then instantly play it back on the piano.  But his mom isn’t so great, just because she supports the music. Later on in life, when Elton figures out that he is gay and tells his mother, (played by Bryce Dallas Howard,) she isn’t exactly supportive. As a boy, however, she’s fine, and it’s his father who young Elton really has problems with. Elton’s father isn’t supportive at all. At first, he’s not in the picture, and then when he does show up, the guy can care less about Elton’s music, or even about Elton at all.

But Elton keeps playing, and we see him sing Rocketman, when just a boy. Now this is the first point of confusion. Did Elton come up with Rocketman when he was just a boy? No. The director isn’t trying to tell the story of Elton coming up with the songs. Instead, he’s just throwing the songs in there, whenever the content of the song fits what is happening in the story. So he is using the music as a soundtrack to Elton’s life. For any other movie, that could work. Put songs in whenever, and if they fit the story, then great. But if the story is supposed to be about the songs themselves, and the guy who came up with them, then we’ve got a problem.

So Rocketman comes on, and a kid Elton is dancing around singing it, as other people suddenly start singing and dancing in the streets. At that moment we realize we are in a musical. And that doesn’t exactly hold true for the entire film, but it certainly seems like it at first. We haven’t even met the Taran Edgerton (Kingsmen) adult version of Elton yet, but we’re already listening to adult Elton’s music. Maybe this movie thought this was an advantage, that they could get to the great songs earlier. Instead, it feels more like sloppy writing. Like, “we don’t care when, in his life, he came up with the songs, we’re just going to throw them in there whenever we want.”

Elton starts playing with a band, and that band does backup for a soul group of black musicians. They become friends with the members of the group, and one of them gives Elton, (still called Reginald, at this time,)  the idea to change his name. Another one gives Elton his first male sexual experience and turns him onto the idea that he just might be gay. The man kisses Elton, when he is just waking by, and it’s the kiss that first opens his eyes.

And not long after that, Elton is meeting a producer who talks to him about his music (at least we get a conversation about what the producer is looking for,) and then the producer introduces Elton to a guy named Bernie, who will write lyrics. Elton will then take the lyrics and set them to music. And that’s how they will write songs. It’s a fantastic idea. So why not show us some of that process? Show us some of the songs this guy gives him, and how Elton tries out different beats and rhythms until he gets it right? What a wasted opportunity. The reason why the movie doesn’t do this is because the director, Dexter Fletcher, wants to tell the story of the man, not the story of the music. He doesn’t seem to realize that they are connected, and that it doesn’t have to be one or the other.

After becoming successful as a partnership with Bernie, Elton meets John Reid (Richard Madden, better known as Robb Stark from Game of Thrones.) Reid is a music producer himself, but he’s also the subject of Elton’s sexual infatuation. The two start seeing each other and Reid convinces Elton to dump his producers and sign on with him instead. And no sooner does he do this, does Reid show his true colors, which are that he doesn’t actually care about or like Elton at all. He was just using him for money, and once the ink is dry on their contract, Reid is entitled to it, going forward.

This leads Elton to spiral down a path of drugs, alcohol, and self-destruction. He’s more popular than ever, but his self-loathing and depression are both at an all time high. It’s around this time that Elton visits his dad again, who now has a new family with sons that he actually cares about. And that is made very clear to Elton. Not long after that, he comes out to his mom about bring gay, only to be told that he will never find happiness. And he tries to kill himself with drugs on at least one occasion. Considering that this all started with the abuse from his boyfriend and manager, Reid, it’s hard not to make comparisons to the abuse and being taken advantage of that Freddy Mercury experienced at the hands of his manager / boyfriend in Bohemian Rhapsody. Only that makes vie delivered the punches on a much more emotional level. In that movie you cared about Freddy, the sad and disturbed man who was basically going held prisoner and driven away from his friends. In Rocketman, Elton comes off as a depressed drug addict more than anything else. Let’s put it this way… in the scene where Bernie comes to visit Elton at a party, and introduce s couple of girls to him, Elton acts like a jerk, and Reid is nowhere to be found. It’s hard to blame Reid for moments like this, when Elton is clearly doing it to himself.

Rocketman does tell an interesting story. Sure, we’ve seen movies before about characters who are ambitious when they are young, rise up and become successful, turn to drugs and get depressed and then plummet all the way down. From Boogie Nights to Goodfellas, it’s a commonly told story. The rise and the fall. The success and the failure. And maybe the thing that makes Rocketman special is that Elton never has career failure. Only life failure. But that just brings me back to my original point, (especially with how similar this story arc is to that in Bohemian Rhapsody,) what about the music? Director Fletcher thought he had a brilliant idea to show where the songs may have been inspired from, and show how they related to Elton’s life, and that’s all well and good, but you can do that and also show Elton writing the songs too. It’s not one or the other. And by depriving us of seeing Elton write any of his songs, it’s depriving us of seeing Elton doing what he does best. It’s the reason why we love Elton to begin with. Which means it’s the reason why we’re there, sitting in the theater, watching this movie. Consider it like this…you go to see a band because you want to see them perform the songs that you love. Their hits. And the band knows that. So hopefully they play their hits. But sometimes they don’t, and the audience is rightfully disappointed. Same thing here. The movie is fine, but what we really want to see is how Elton wrote the music, and this movie never gives us that. What a mistake.