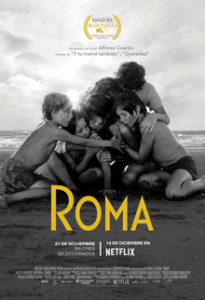 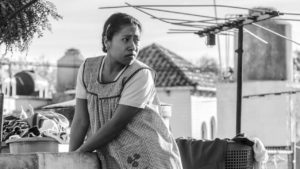 It may be artistic and symbolic, but on a storytelling level, this film leaves a lot to be desired.

Roma is an okay movie. It certainly looks beautiful in the ways that great foreign black and white films from the past also looked beautiful. Movies like The Rules of the Game and La Dolce Vita. But the problem is, there’s a very simple story here that doesn’t go far enough. The story is about a house keeper for a wealthy family in Mexico City who finds out she is pregnant. She tells the man who will be the father, and he leaves her. Meanwhile, in the family where she is working, the husband leaves the wife and kids for another woman. So both of our female protagonists, the house keeper and the wife, are going through the same thing at the same time. At that’s pretty much the story. It does go a tiny bit further towards the end of the film, as we get to see the two men who have run away, about one more time, briefly, but that’s about it. There isn’t much resolution here, and aside from one pretty upsetting thing that happens to the house keeper, this movie doesn’t really have enough going on.

Roma is a very artistic movie. It’s a black and white, foreign film, and it calls up some of the more beautiful black and white, foreign films of the past, such as The Rules of the Game, in terms of its look and locations. But what it doesn’t do is deliver on story. The plot here is just very thin and without much resolution. There’s nothing compelling here. We want to see what happens to our pregnant heroine when she gives birth, but really, that’s about it. Other then that, and a handful of villainous male characters, this movie doesn’t have all that much going on, in terms of story. Instead, it exists as a sort of thinkers piece, trying to get us to notice symbolic themes and ideas. While that is kind of fun, if you put the effort in, it’s much better if the symbolism is natural and not forced. If the movie has other qualities too, such as a gripping plot, fascinating characters, or even some humor. This movie doesn’t really have any of those things going on.

Our protagonist is Cleo (Yalitza Aparicio.) She’s a housekeeper for s wealthy white family in Mexico City. The movie opens to a lengthy shot of water bring splashed over and over again across a tiled driveway. We see things in the reflection, from time to time, such as a plane flying overhead. The flying plane is a repeated theme in this movie and it represents escape. All of the men are trying to escape their lives in this film, (notice the multiple planes flying by during Fermin’s final scene,) while the women stay to face the challenges in their lives. This is what I mean about forced symbolism. When you spend two minutes showing us water splashing on tile, and the single image that appears in the water is a plane, you’ve given the viewer no choice, but to think about it. There are better ways to do this.

With regards to the story, Cleo works for a wealthy family and sometimes feels like she is so close to them that she is actually a part of the family. This includes going on vacation with them. At the start of the film, she and another housekeeper, (her friend, Adela,) are cleaning the house, getting it ready for the parents. The father is often out of town on business, and tonight he will be coming home from a trip. But Cleo also has her usual responsibilities, such as getting the children from school, and she rushes around to make sure that everything gets done. The one time we see her splashing the driveway to clean the dog poop that has been left there, is the only time we see her cleaning the driveway before the father gets home. And that’s because she is so busy doing everything else.

One by one we meet the different family members as they arrive, all leading up to the father, who is last. We even meet the grandmother, or mom’s mother, who is very involved in the children’s lives.  And when the father arrives, we see him carefully pulling his car into the narrow driveway, little by little, and still not being able to avoid driving over the dog poop that is in the driveway. The point of all this is to show that sometimes there are problems, no matter how hard you try to avoid them. Problems are inevitable. Cleo tried her best to clean the driveway at the start of the film, and the father tried his best to get the car in nicely and carefully. But there was no avoiding the dog poop. In the case of Cleo, she could only do so much to clean that driveway before she has other responsibilities to take care of, such as the children.

When the movie has you thinking about cleaning a driveway and driving over dog poop, you know the plot doesn’t have much going on. Now that all the characters are home, and under the same roof, it’s time to get into whatever sort of story there actually is. The father joins the family on the couch at night, where they all cuddle up and  watch TV together. And that’s when Cleo creeps in. She literally crawls on the floor and over to the side of the couch, where she sits like a dog, being pet by the boy. She is watching TV with the family, only staying hidden from the adults. And the fact that she’s sitting on the floor, while even the children are on the couch, indicates that she is clearly not on the same level as them. When the father finds out she is there, he even asks her to go get something for him, putting her right to work.

In these early scenes, Cleo clearly wants to be a part of the family, but is being accepted in the way she would like. She is rejected at her job, and she is rejected in her life outside of work too. On her day off, we see Cleo in her bedroom with a guy named Fermin. This guy is a committed martial artist who does a lot of full frontal nudity as he demonstrates swinging a bo stick around in a tiny room. It isn’t long before Cleo finds out she is pregnant and that Fermin is the father. Fermin only has three scenes in the movie, and this bo stick introduction is the first one. His second is when Cleo goes to a movie theater with him and tells Fermin that she is pregnant. He goes to the bathroom, leaves his jacket (so she won’t suspect anything,) and never comes back.

This guy is pretty terrible, and the scenes with him get even worse. In his third and final scene, Fermin threatens to beat Cleo, and the baby, if she doesn’t leave him alone. Meanwhile, in the upper class parallel story, the family unit is also torn apart by a man who isn’t willing to accept his responsibility. The father leaves the family to go off on another business trip, only it becomes clear to the mother pretty soon after that the father isn’t on a business trip at all. He has just decided to leave the family. The mom becomes a wreck, telling people all about her misery and crying on the phone, despite her children being in earshot. And clearly what is happening to the mother and what is happening to Cleo are meant to be similar stories.

Unfortunately, this is about as far as the plot goes. The family goes on vacation to the countryside, and Cleo comes with them. There is a hunt scene in the country, that is reminiscent of the great rabbit hunt scene from The Rules of the Game. But just like in that movie, the hunt might look artistic, but it does nothing to add to the story. The same can be said for a riot that breaks out in the streets and finds its way into the story where Cleo and the grandmother are shopping for a crib. This is meant to be background excitement, and maybe it has some symbolism too, but at a certain point, we’ve had enough already, and we just check out. Sure, we’re still involved in the limited story, but the desire to figure out all the symbolism has long since gone out the window.

The story pretty much culminates with Cleo giving birth. The results are surprising, but other than that, this story has been pretty anti-climactic. Even when we find out a secret about the father, and what he’s been up to, it’s not all that exciting. The good thing about all this is that the movie is willing to take us other places with the characters, and sometimes that’s kind of entertaining. For example, the deserted land where Fermin trains with his bow stick, along with many other men who are also training in formation with each other, is pretty neat to look at.

Roma is a nice looking movie, with a pretty upsetting story. There isn’t a whole lot that happens here, other than the protagonist finding out she’s pregnant and eventually giving birth. But the conflict is limited and consists only of men leaving the women. There’s only one confrontation scene, for one of the women, and it’s brief. Instead, we mostly get background events trying to keep us entertained while adding nothing to the plot. I’m talking about the riot in the streets or the hunting scene. This movie needed to have more engrossing characters, (there are basically three characters here, the mom, Cleo, and Fermin.) Even the father gets very limited screen time. And that doesn’t necessarily mean anything if the plot is there. After all, the great movie Locke worked to perfection while starring only one character. But with Roma, this movie needed more. The artistic look is nice, but it’s not quite enough.