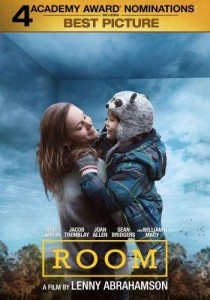 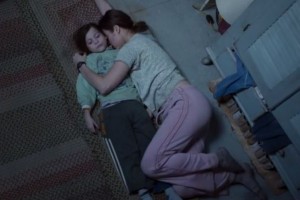 An incredibly fascinating, emotional, and original film, this one tugs at your heart-strings like no other film ever has.

This is a pretty amazing movie. For one, it is extremely original, featuring the story of a kidnapped mother who tries to give her son a normal life, by making up stories about the world to tell him. Ma has been living in a tiny shack for about seven years. There, she and her son finds all kinds of creative ways to spend their days, until the kidnapper comes by to pay them a visit each night. The first half of the movie, about life in the room, is incredibly compelling. The second half, about life after getting out, takes a bit of a nosedive. There’s plenty of good in this half as well, but it’s not flawless the same way that the first portion of the film was. Regardless, what we have here is a movie that is both fascinating and creative, and overwhelmingly powerful.

Room is a pretty incredible movie. Every year there are only a small handful of films that are truly different and eye opening in their originality. This is one of them. It’s the movie about a mother trying to give her son a normal life, despite the two of them being kidnapped victims, living in a shack, and monitored on a daily basis by their kidnapper. The movie uses the voice over of the little boy, Jack, to help us understand the way he sees things and understands the world. It is so incredibly smart on so many levels. It is also an insanely sad film. This is the movie that will make you cry more than any other film. That all goes to showing just how powerful a movie this little gem is.

The film opens with Jack taking us over the room in voice over, then saying good morning to each object in the room. It’s as if he looks at lease objects, such as sink, as his friends. It also shows us how limited the amount of things Jack knows and has around him, really are. From there, we go over a usual day for Jack and his mother, Ma, (Brie Larson, in the role she won the Best Actress Accademy Award for.) Their day includes arts and crafts and exercises, where Jack runs from one wall to the other, with the mom joking around with him about which wall he should go to. Their arts and crafts involve making things out of used egg shells.

And then the alarm goes off. It’s now getting into the evening and this is an alarm on Ma’s watch. It signals that it’s time for Jack to get into bed, in a hurry. This whole alarm business, of suddenly time to turn off the fun and get serious, and get moving, because someone’s coming, reminded me of Will Smith’s watch alarm in I Am Legend. In that film, the alarm signaled the end of daylight, right before the vampires came out. Once it went off, Smith and his dog started locking the house up immediately. Here it’s Jack getting into the closet where he sleeps and climbing into his bed.

The man who comes in is the kidnapper. When Ma and Jack talk about him during the day, they refer to him as Old Nick. He comes in every night and rapes Ma, although at this point it doesn’t seem like rape since Ma is so used to it that it has basically become a routine, and she doesn’t put up an objection or fight. That makes it a little easier to watch for the audience, but we all know exactly what it is, whether the movie disguises it or not. On this particular occasion, it was Jack’s birthday, old Old Nick sees the cake. He then comments about getting a present for the boy and Ma tells him she doesn’t want Old Nick to ever see him.

That ends day one. On the second day we see the characters, we learn a little bit more about how Ma explains the world to Jack. She teaches him that everything in the room with them is the world and that everything out there, outside of the skylight and everywhere else, is outer space. She teaches Jack that what they see on the television is coming from space. That night, when Old Nick comes to visit, Jack sneaks out of the closet to take a peak at him. When Ma wakes up and sees Old Nick holding out his hand to touch Jack, she snaps and attacks Old Nick. That leads to a problem.

Old Nick turns off the heat. He is punishing Ma for attacking him, and that leaves Ma and Jack freezing, not knowing if Old Nick will be coming back. They don’t exactly know where they are, and think that maybe they are in some deserted shack in the middle of the woods or something, where nobody ever goes. Every day Ma and Jack stand by the skylight and air vents and scream as loud as they can at the exact same time, hoping someone will hear them. Only the room is sound proofed in every way imaginable, and their voices come close to reaching the outside. Now, with the heat turned off, Ma realizes they need to do something and figure out a plan.

She comes up with some ideas to help them escape. First it’s about making Jack sick so that Old Nick will consider it an emergency and take the boy to the hospital. Only Old Nick doesn’t do this. He just says he will get medicine and bring it over the next day. Then Ma comes up with a second plan that involves Jack playing dead, being wrapped up in a carpet, rolling out of it, jumping out of the back of a pickup truck, and calling for help. Watching this plan in action is pretty amazing. Especially the shot of Jack lying on his back staring up at the sky for the very first time, in absolute amazement.

The whole first half of the film is devoted to this story of Jack, Ma, and the occasional visit from Old Nick. The mid point of the film is the escape, and then the second half of the movie is about the recovery. It’s interesting and enjoyable, but nowhere near on the same level as the first half. This is where the movie starts to drop the ball a little bit, for the very first time. For one thing, we barely hear or learn about the kidnapper and what is happening to him, at all. Old Nick is pretty much taken on of the story. That’s a terrible mistake. If this is in any way a film about getting justice, then we should have at least learned about what happened to him. The movie should have ended with Ma being called to trial to testify against him or something. And the second half could have been in part about whether she had the strength to do that or not, and see him again.9None of that happens. The second half is simply about Ma recovering, and living with Jack at the home of her mother, where she grew up.

Ma’s parents are played by veteran actors Joan Allen and William H. Macy, and they are now divorced. That’s realistic and fine, for the parents to have gone through such a tough time when their daughter went missing, that they are no longer together. And I love the subplot about how Macy can’t look at Jack because it reminds him of how her daughter was kidnapped, and how this boy is the son of the kidnapper. The only problem here is in a lack of resolution.We go from witnessing this problem with Macy to never hearing about him or the problem again. That’s another major mistake.

Maybe it’s a matter of that the movie just had so much on its plate. Especially in the second half. Aside from the storyline with the parents, (and Ma and her own mother have some conflict as well,) there’s also the television interview she does, which goes in unexpected directions, and then the depression Ma faces afterwards. The first half of the film was much more limited and restricted, and this resulted in much better results. Still, the movie as a whole is pretty incredible. It is fascinating and compelling. Brie Larson deserved her oscar for this film and the movie is not only emotional in all the right ways, but it is also extremely smart and creative. Despite some minor flaws in the second half, this movie is a real powerhouse of a film.