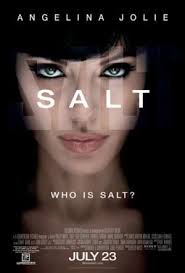 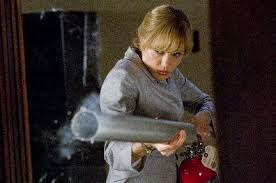 A pretty thrilling spy movie that works with both action and edge of your seat suspense.

Salt is a pretty great movie about a spy who is possibly mistaken for a traitor. I say possibly, because the movie plays along with the idea that Evelyn Salt (Angelina Jolie) might or might not be a bad guy. This is something that other movies have tried to do, (such as Knight and Day with Tom Cruise,) and had little success with. But in Salt, it actually works, and the reason is because this movie does a nice job of convincing us of Salts allegiance, and also of making us care.

The movie is smart and exciting. It was directed by Phillip Noyce, who is the go to director for political thrillers. Royce is the guy who directed Patriot Games, Clear and Present Danger, and the Quiet American. All pretty great films. He knows his way around the territory, and is the best director possible to be  behind the scenes with this kind of material.

Salt starts off with Evelyn interviewing a Russian spy who is a walk-in, and suddenly decides to defect to the United States. The interview is pretty standard, and I like that rather than bore us with this Russian’s stories and pretend like he is telling us something of deep merit, the movie has Evelyn share our reaction. “You’re killing me, man,” she says to him. She’s  in a hurry to get home and prepare for her anniversary dinner with her husband. She’s  even been planning out and practicing how to fold the napkins in a sexy way. I love that the movie takes the time to give us these details and to understand her agenda.

As Salt is walking out the door,  the Russian says her name. She thinks he’s calling her, but really he’s saying the name of an Anerican who he knows to be a Russian spy. He says that she will kill the president of Russia at the funeral of the American  Vice President. Apparently he has just passed away. The movie is wise not to show us him dying. Any other movie would have opened with that and then had the rest of the movie be about the aftermath of that event. This one doesn’t have a second to spare. It has too much else going on, and that’s a good thing. It knows where to trim the fat.

Salt goes on the run, making a fantastic escape from the CIA building. Soon she is jumping off overpasses and onto the roofs of trucks, rolling around on them, trying to avoid being noticed or shot. It’s not that this is such creativity or original action, I mean this truck jumping situation kind of reminds me of the stuff from The Matrix 2, only here it somehow has real depth. i don’t know if they really did it as opposed to how much was CGI (we certainly know matrix was all CGI,)!but somehow it is all just incredibly exciting. and things are really only getting started.

Something does happen with the russian president, and suddenly this is a whole different movie from anything the trailers would have you believe. this is no longer as simple as wrongfully accused agent on the run. this isn’t the fugitive or minority report, where she’s running around trying to escape those who are coming after her, while at the same time trying to prove her innocence. this movie has a much deeper agenda then that.

it’s hard to say much more about this film without giving things away, so I’ll try to tip toe as best I can here. the reason the movie works is because the plot and twists are so strong and so well planned and thought out. there’s an all-star cast here, not of mega-stars (except for jolie), but of very talented actors instead. liev schreiver and chitadel olifor are both really great artists who both have a tendency to choose smart roles. olifor in particular has popped up a lot over the past few years, first in dirty, pretty, things, and then later in inside man and american gangster. schreiver added some of the only interesting elements to the wolverine movie and was fantastic in the russian bielski brothers movie, defiance. these guys aren’t a list stars who could headline their own movie, but that’s what makes them so special. they are character actors, like paul giamatti (or at least like giamatti used to be).

the second half of the movie is vastly different from the first, as the audience is really kept on the edge of their seats trying to stay ahead of the film. this is a movie, like inception, that makes the audience want to figure it out. is evelyn salt a russian spy or an american? she clearly has ties to both, and so the question is about who she really is. and the movie makes us care and wonder.

the spy genre is not one that is handled well all of the time. that’s because it usually focuses on high tech gadgetry (bond, mission impossible) or on comedy (knight and day, mr. and mrs. smith, get smart). making a political thriller is the toughest of all of these feats, and that’s the reason it is so rarely done. even when it is put into action, it often doesn’t work. just take movies like rendition or spy game or lions for lambs. this genre is very dangerous ground to tread on, especially since audiences are so smart these days that it seems like they’ve already seen everything. we’ve seen spies who were really on the side we weren’t expecting, (no way out), and heroes that got suckered into the bad guy’s scheme for unhappy, yet perhaps realistic endings (arlington road). with everything that has come before it, it’s pretty amazing that salt works out so well and feels so fresh.

Angelina jolie deserves a lot of credit for that. not so much for her acting, although that’s pretty good here too, but for her pursuit of this script. jolie has been looking for a smart spy movie script to make for over ten years now. i remember when i was back in college, about a decade ago, hearing that she was interested in something like this. the closest she could get for a while, was playing the hot spy babe, named “fox,” in wanted. but she kept looking. even when the bourne identity trilogy was exactly the sort of thing she was looking for, smart and thrilling, and handed off to matt damon. salt is along the same lines as those movies or as the new daniel craig bond movies. it is exciting and mysterious and it keeps you wanting to know more. this movie is better than anything i expected it could be. phillip noyce is at his best since clear and present danger, nearly two decades ago, and that is quite the accomplishment.