The Santa Clause 3: The Escape Clause *** 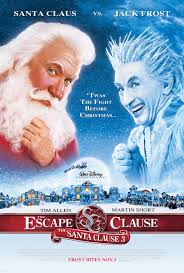 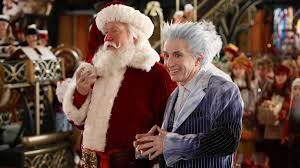 Far better than the second movie, and just about as good as the first, this movie actually gets creative with the ideas while making sure to not bite off more than it can chew, and the result is kind of fun.

The Santa Clause 3: The Escape Clause is a fine movie. In fact, in many ways it’s quite clever. Especially coming off of the last movie, which had a bad robotic Santa running things at the North Pole, and not a whole lot more. This third movie in the trilogy isn’t tied down to anything. Not the idea of Santa’s sleigh ride to deliver toys on Christmas Eve or the idea of making toys at the North Pole. Instead, this movie is in many ways about time travel. It features numerous elements from Charles Dickens’ “A Christmas Carol,” to visit the past and future. All while dealing with two storylines… Santa’s in laws visiting the North Pole while thinking they are in Canada, and a villainous Jack Frost, who has plans to take over as Santa Claus and reverse everything that has happened since the very first movie. The humor is a little clunky, and some points work better then others, but for the most part, this is some enjoyable entertainment.

The Santa’s Clause 3: The Escape Clause is actually a pretty good movie. Now that’s surprising for two reasons. First,  try’s third movie of a trilogy is usually not very good. Once in a while you get a strong sequel (Aliens, Terminator 2, and The Godfather Part 2,) but very rarely do you get a  strong third movie. And this entry still isn’t quite as good as the original Santa Clause, the movie that got this Tim Allen series started, but it’s pretty close. And the other reason why this is so surprising is because the second movie (which they took third time with, unlike this one,) was pretty lousy. Especially in comparison to these others.

The second movie was about a robot Santa wrecking havoc in the North Pole. It was also about a romance back home in America between Santa and the woman who would become Mrs. Claus. That movie was tied to the ideas of Christmas. Specifically to the concept of making toys, which was what the bad robot Santa story was all about. The third movie has very little to do with Christmas and that actually turns out to be a very good thing. The Christmas ideas are exhausted at this point (as far as this series goes.) The first movie was about delivering the gifts on Christmas Eve. The sequel was about making the toys in preparation. That about covers the bases on Santa’s job and responsibilities. And the third movie is smart enough to know that. Instead of finding a new problem about Santa delivering the toys, or something like that, this one avoids covering the sand territory or problems all together (with the exception of the hiding his identity from the parents storyline,) and in this movie the big problem deals with an enemy… Jack Frost (played by Martin Short.)

The movie does something else smart too. It gives us a version of the famous story A Christmas Carol by Charles Dickens. And it does it in a way that’s not so obvious or in your face. Gone are the three ghosts. Gone is the mean and angry Scrooge. Instead, what we get here is time travel. We get scenes of going back into the past, and also scenes of going into the hypothetical future, which is incredibly bleak, (just like in the Dickens story.) So instead of being about delivering toys in the reindeer-pulled sled, or making toys in the workshop, this movie is about time travel. And the closest it comes to Christmas themes is having a scene of Santa put the topper on a Christmas tree and invoking ideas from A Christmas Carol. Not being handcuffed to the usual ideas of Christmas movies (especially Santa movies,) turns out to be a very good thing.

The opening of the movie shows Mrs. Claus (Elizabeth Mitchell, from TVs “Lost,”) teaching students at the North Pole. They ask her about a story and a flashback begins to show the story of the time she was pregnant,  living at the North Pole, and feeling incredibly lonely. It was Santa’s busy time of year, which means he was constantly checking the list twice, overseeing the toys, and doing all the things that needed to be done. And his wife was being neglected. At that point, Santa got an idea. What if he brought his wife’s parents up to the North Pole? Now when you think about it, this is pretty ridiculous. His solution isn’t to start paying attention to his wife, but instead, it’s to bring other people there to bail him out.

If you just go with it, however, you get on board with the idea that he’s at his busiest right now, and needs some help. And then there’s the idea that his wife hasn’t seen her parents in a long while, and that he’s really doing this for her, or at least has convinced himself as much. So now the plan is to bring the in-laws to the North Pole, only there’s just one problem. They can’t know it’s the North Pole. They don’t know that Scott Calvin (Allen,) is Santa. They think he’s just a regular toy maker who lives in Canada. And so Santa and his elves get together and start disguising the North Poke up to look like Canada.

But there’s an even bigger problem brewing. Jack Frost (played by Martin Short.) The council of holiday characters that we met in the last movie (led by Father Time and Mother Nature,) meets again. This time it’s to decide what should be done about this guy, Frost. He’s been trying to work his way into Christmas since he doesn’t really have a holiday of his own. And the council members believe he should be punished. Santa, however, decides to give him another shot and take him under his wing, allowing Frost to do community service in the North Pole. Of course, this makes no sense. Granted the logic is that Santa is super forgiving and also has a lot on his plate right now, so can use some help. But considering that Frost was specifically targeting Christmas, maybe have the character responsible for a different holiday be the one to take Frost under his wing, (it should also be noted that only one member of the council is female – Mother Nature – the one who has to be. That means Cupid, The Easter Bunny,  Father Time, Santa, The Tooth Fairy, and The Sandman- all male. Why couldn’t at least The Tooth Fairy be female? Seriously.)

And now we have Santa going to the states to get his wife’s parents (played by Alan Arkin and Anne Margaret,) and he brings Sandman along to knock them out for the journey. I like that in this movie as well as the last one, they used a fellow council member to help – in the last movie it was the Tooth Fairy.) Another cool move here is that while in the states to get the parents, Scott stops by his ex-wife’s house to see his son, Charlie.  As it happens,  the whole family, including Neil (the new husband, who has been in these movies since the very first one, played by Judge Reinhold,) and their daughter, Lucy, want to come to the North Pole. And for some reason Scott allows it. Logically this might not make much sense, but these are characters we are find of, if for nothing more than nostalgia, taking us back to the first movie. So getting to spend more time with them is a nice treat. And it’s also kind of cool that despite going all the way back with Scott to that very first film, they’ve never been to the North Pole before to see where Scott works.

This whole family arrives, (seeing the thrill on Scott’s families faces as the sled touches down, while the in-laws are asleep beside them, is fun.)   For a little while it’s about trying to make the place seem as much like Canada as possible to the in-laws. A quick scene where adults explain to Lucy that she has to pretend this is Canada and hide her excitement about being in the North Pole would have gone a long way. And then Jack Frost starts making trouble. He begins by sabotaging machines. One after another. Then he starts getting to Scott and Ms Clause emotionally and psychologically, manipulating them into having regret about their positions at the North Pole.

But Frost isn’t done yet. He finds out about the Hall of Snow Globes and a special Snow Globe where if Scott says he wishes he never became Santa while holding the globe, he goes hack in time to the night he discovered Santa on the roof, and has to relive that moment. Frost uses this to go back in time along with Scott, and then grab Santa’s jacket before Scott does, putting it on to become the new Santa. That jettisons us to twelve years in the future, where Frost has completely taken over. The North Pole has become a tourist attraction. Reindeer are at a petting zoo. Children pay to buy their way onto the nice list. Scott Calvin’s life and family are a mess. Scott visits ex wife and learns she and Neil are divorced. He finds Neil and Lucy and learns the reasons why, and how they involve Scott’s son, Charlie. This is all right out of A Christmas Carol with the bleak future and visiting multiple people to find out more and more about what the future has become.

But when Scott challenges this future Santa-Frost, we get to go back in time to the night when it all started, once more, and this time really see that scene (including dialogue from the original,) forms née angle. It’s always great when movies do that. Especially when the third movie in a trilogy calls back events from the first. Scream 3 did it by putting the characters on a movie set that replicated the neighborhood and houses of the original film (the window-roof top escape, and closet door locking bedroom door moments were eight out of the first movie.) And the Avengers Endgame, being the third part of an Avengers trilogy of sorts, paid homage to the first Avengers movie, having our characters go beck in time to watch the same moments that happened in the first movie, only from a new angle.  It’s a cool move and finds a nice place hear in this third parter. Bringing in time travel turned out to be a smart play. The movie is by no means great… the logic is all over the place and the humor is pretty dopey… but it is definitely packed with clever ideas, and a thousand times better grab the previous movie.